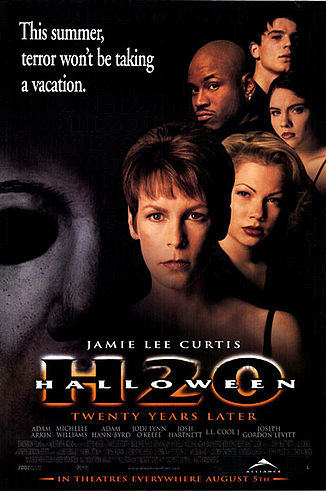 Plot: Laurie Strode must battle the Shape one last time while the life of her son hangs in the balance.

Review: After the events of Halloween: The Curse of Michael Myers, there was no doubt in our minds that the next film would be a follow up. I mean, Michael’s still alive, Tommy and Kara got away with Steven and Danny, and Dr. Loomis is, dead? We now know how Michael keeps going, and how would they stop him?

Well ignore all of that, because Halloween H20: Twenty Years Later, is a sequel to Halloween 2. I remember first hearing about the film, and was happy it wouldn’t take place long after Curse of Michael Myers. I mean, we wouldn’t have to wait more then five years for a sequel. You can imagine my excitement when I found out H20 was not following up the last three films in the series. All I could think was, WHAT THE HELL MAN?!

Halloween H20 starts off by letting us know Michael Myers is very much alive, and searching for Laurie Strode, who is also apparently still alive. Laurie is living in California, under a new identity, having faked her death. Michael tracks her down to a private school, where Laurie is the dean, to kill her once and for all. Laurie’s son John attends the school, and apparently Laurie never had Jamie. Remember, Halloween 4, Halloween 5, and Halloween 6 never happened according to this film.

Michael reaches the school, and tears through a number of students before Laurie, who’s been dealing with all sorts of PTSD since Halloween 2, has to confront him. The school thankfully has almost no students because they all left for a class trip. The two square off, with Michael taking a good beating while Laurie always manages to escape death. Michael finally takes a number of stabbings from Laurie before he gives up and Laurie is able to escape the school.

The police come and put Michael’s corpse in a body bag, loading it into a coroner’s van. Laurie, knowing that Michael is incredibly hard to kill and not believing that he is really dead, grabs the axe from earlier and an officer’s pistol, and she steals the van. While driving away, Michael sits up and escapes the body bag. She slams on the brakes, throwing him through the windshield. She then tries unsuccessfully to run him over. The vehicle tumbles down a cliff but she escapes, while Michael gets pinned between the van and a tree. Laurie recovers the axe and approaches him. He reaches out to her, apparently seeking forgiveness and compassion. At first it seems she will accept this, and begins reaching out to him, but then she slowly pulls her hand back and with one swing decapitates Michael, finally killing him. Michaels head rolls down the hill and Laurie exhales.

The film cuts a pace similar to Scream, and it shows, considering Kevin Williamson, the man behind Scream, helped work on this film as a writer and producer (although he’s uncredited for the writing). Steve Miner, director of the film, had plenty of horror experience with Friday the 13th Part 2 and Friday the 13th Part 3D, so you can imagine I expected better from him.

The characters are stale and not memorable at all, but I will give the film credit, they didn’t follow the typical horror character cliches. Laurie suffering from PTSD makes sense, but it’s been twenty years, and with the amount of medication she’s popping, well she should have made a bit more progress then she has.

I do like that there were plenty of kills, even if I didn’t care about the characters. Michael seemed pissed in this one, and that’s fine by me. His mask leaves a lot to be desired though, it looks goofy more then scary. The mask should always be scary and here it was a joke. I know they went through a few different masks, with CGI being used on one of them!

I hate that Michael showing up out of nowhere twenty years after Halloween 2 is never explained. He somehow got out of the hospital after being blown up in it, and lived for twenty years before finally coming after Laurie. I also hate that this film didn’t follow up anything, choosing to ignore the juicy story of Jamie Lloyd and her struggle with Michael.

In all honesty, I think this was a vanity project for Jamie Lee Curtis, who had a big hand in getting the film off the ground after Halloween 6 didn’t fair well at the box office. She had a number of box office flops during the 90’s and this was her way of getting back into a film that people actually wanted to see.

Acting: Jamie Lee Curtis is not impressive in the least here. Her character is now a boring drunk, and even when she tries to act tough, it’s laughable.

Adam Arkin did an okay job as Laurie’s boyfriend Will, but really he had nothing to do here.

Josh Hartnett made his film debut here. Josh would make much, much better films over the next ten years. He was the best actor here, and that’s saying something compared to his co-stars.

Gore Factor: There’s stabbings, an ice skate to the face, death by dumb waiter, and a beheading. Nice!

Fun Facts:
– When Jamie Lee Curtis’ character says, “Go down the street to the Beckers…” this was supposed to refer to the line from Halloween (1978) , “Go down the street to the McKenzie’s house…” The name was changed to Becker, which was the last name of Drew Barrymore’s character in Scream (1996).
– The reports that Kevin Williamson’s original treatment for H20 included a scene in which Halloween 4 through 6 are acknowledged as being “in continuity” and canon are completely accurate. The scene did exist, and involved a bitchy student at Keri/Laurie’s school giving a class report on the “Haddonfield Murders”, and going into great detail about Jamie Lloyd, Danielle Harris and JC Brandy’s character from Halloween 4 through 6. The student talks about Jamie losing her parents in an auto accident, as was the explanation in those sequels for Laurie Strode’s absence. (In fact, the only reason for Laurie to be in the Witness Protection Program with her son under an assumed name as “Keri Tate” at all was because the original story for H20 was conceived like this, with Halloween 4 through 6 in continuity, and Williamson thus being required to create an explanation for Laurie’s “death” in the previous movies and her subsequent resurrection.) The student’s report chronicles Jamie’s being hunted and eventually killed by her uncle, Michael Myers. Upon hearing this oral presentation in the classroom, a grief-stricken Keri/Laurie then retreats to a restroom and throws up. This scene was of course omitted from the actual film.
– The movie was made after a suggestion by Jamie Lee Curtis. She wanted to “20-year Anniversary” movie with John Carpenter, but the director declined.
– The director and writers decided to treat this movie as if Halloweens 3-6 never took place. This was a decision made to keep the plot simple and focus on the Laurie character.
– P.J. Soles was originally approached for the role of Keri Tate’s/Laurie Strode’s secretary. Soles never gave a straight answer as to what she wanted to do, skeptical about returning to the series as someone completely different then her character Lynda, originally killed off in Halloween. She eventually lost the role to Jamie Lee Curtis’s mother, Janet Leigh, who was approached after not getting an answer from Soles.

Overall:  I just don’t like Halloween H20. Ignoring the previous movies, especially after all the work they put in there to give Michael more back story, was just a mistake in my opinion. While I did say in my last review that we didn’t need to know how Michael kept coming back, it was still more interesting then bringing back Laurie Strode. This is still better then Bustaween though.