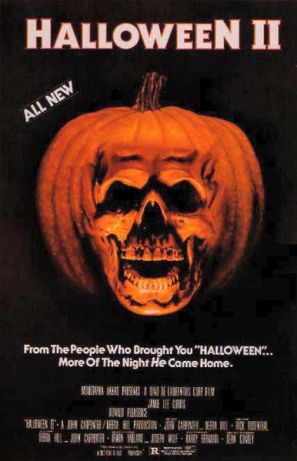 Plot: In a continuation of the plot of Halloween, Michael Myers shows off his indestructibility by resuming his murder spree despite being gunned down with six bullets in the original movie. Laurie Strode is once more his intended victim, with Dr. Sam Loomis again in hot pursuit.

Review: More of the night HE came home…..

The first Halloween is a masterpiece of horror film making. The film had everything you could want, a good killer, plenty of dead bodies, nudity, and a good strong lead in Jamie Lee Curtis. The filmmakers never intended to make a sequel though, the ending was just a way to creep fans out. However in the 80’s, sequels were all the rage, and Halloween wasn’t going to escape getting a sequel. It wouldn’t take long before we got Halloween II, and I can honestly say it’s my favorite film of the franchise.

The film picks up immediately after the first one, keeping the audience going on the ride they were already on, and this is a great thing. Trying to pick up the story years later would have been a mistake in my book. We get three perspectives here, just like the first film. We get Dr. Loomis, who searches Haddonfield with the police trying to find Michael Myers, then we get Laurie Strode, who’s in the hospital, and Michael Myers, who’s making his way towards the hospital to get Laurie.

As the movie progresses we finally get a reason why Michael is going after Laurie. Depending on who you ask, this was either good or bad for the franchise. The revelation that Laurie is Michael’s younger sister is a big one, and changes the entire idea of the first film around. Gone is the idea that Michael is just tracking down random girls as now he’s after his sister, the last of his family, to finish the job he didn’t get to finish when he was a kid.

Personally, I think having a reason for Michael going after Laurie was a good thing. In the first film it’s very random, it works don’t get me wrong, but if he didn’t pursue her here it would have just been a copy of the first film. Giving him a reason to keep chasing Laurie helps the film out immensely, and this storyline would end up carrying the franchise for the next twenty years.

One thing that I enjoyed about the film is that there’s not a bunch of dopey teenagers getting knocked off one by one. Instead it’s a mix of teenagers and adults, who aren’t doing anything out of the ordinary like getting high or drinking like the first film. These are people who are working, doing what most people do in their normal lives, and buck the horror film trend of “get laid/high and you get killed”.

Michael also becomes more then just a man in a mask here, he’s a presence with purpose. He’s elevated from being in the shadows to pure evil that takes a beating and keeps coming. Again he takes six shots, close range to the chest, and two shots to the eyes and still, STILL keeps coming. There’s no doubt in my mind that this was fully intended to finish off the series, at least with Michael in the lead villain role, because he’s shot up and burnt to a crisp before the credit role.

Rick Rosenthal, who would go on to direct a later sequel in the franchise, does a great job here taking over for John Carpenter. The movie moves along at a medium pace, not giving away too much but not holding back either. Viewers will enjoy the chase by Loomis, the stalking by Michael, and the running by Laurie. The setting, the hospital, is a great one as well. You’re supposed to be safe there, but the hospital is anything but safe with Michael roaming the halls.

The look of the film doesn’t change too much but that’s not entirely a bad thing; we’re still in the small town of Haddonfield and there’s a killer at large – doesn’t get any more creepy than that. The score is of course perfect, with John Carpenter bringing his iconic and yet simple music to the film to scare the crap out of everyone.

I do have some complaints about the film. The mask Michael wears changes pretty drastically from the first film. In the original Halloween the mask was bigger, with more detail. Here it’s lost its detail, looking stretched and worn down. Now the mask being worn and dirty would make sense if the film was set a few weeks or months down the road from the first film, but it’s not, it’s the same night. The mask shouldn’t have changed, maybe a little dirty, but not the drastic change it got.

Another issue is how they upped the tone of the kills. The first film had swift effective kills that didn’t rely on gore. With the release of Friday the 13th, gory kills were all the rage, so Halloween II had take it’s kills to another level, and I think that hurts the film. Michael is a stealth killer, quick and to the point, not dragging anything out. They should have left the gory stuff to Friday the 13th.

Acting: Jamie Lee Curtis returns as Laurie Strode and does just as good of a job as she did in the first film. She’s quiet and easy going until it’s time to run from the shape.

Donald Pleasence brings it as Sam Loomis, getting more screen time here than in the first film. Donald chews up the scenery here and lifts the movie up like the first film.

Dick Warlock plays a good Michael Myers, although he’s not as imposing as Nick Castle was in the first film.

Gore Factor: We get a knife to the chest, a drowning/face burning, a blood draining, a throat slash, and a scalpel to the back…ouch!

Nudity Factor: Pamela Shoop shows off her ta-tas and Leo Rossi takes his shirt off for the ladies.

Overall: This is my favorite Halloween film thanks to the setting (the hospital looked exactly like the one my mom worked in), the kills are good and Dr. Loomis gets more screen time, which I can’t get enough of. I think setting it right after the first film was a great choice, and you can easily watch the first and second film back to back for pure Halloween fun.