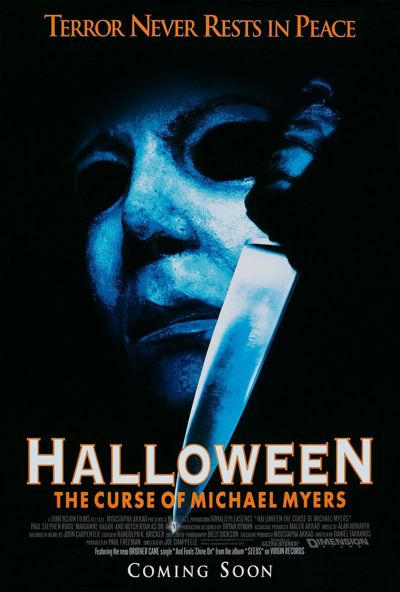 Plot: Six years has passed since both Michael and Jamie disappeared from Haddonfield’s Police Station at the end of Halloween 5: The Revenge of Michael Myers. Haddonfield is now a quiet peaceful town and is ready to allow Halloween to be celebrated again. Jamie Lloyd, still alive and now with child, escapes the Smith’s Grove sanitarium with Michael Myers in pursuit.

Review: I remember the first TV commercial I saw for Halloween: The Curse of Michael Myers. I remember how excited I got by the thirty second trailer, there was no doubt my family would be in the theater for this one. I can’t stress how exciting a time it was for horror fans when Halloween 6 as I’ll be calling it for the review, was announced and hyped. During the 90’s, slasher films were taking a backseat to ghost films. Jason Voorhees and Freddy Kruger were running out of gas, and Michael Myers had been dormant since 1989. The internet was just getting started, so keeping up with the newest films was a chore.

I remember being parked in the theater for Halloween 6 with my brother and friend Steve. Mom sat a few isles back and we all enjoyed what at the time was a scary, interesting Halloween flick. It answered questions, but left you with so many more. There was no way they wouldn’t follow this one up, just no way. Let’s not get ahead of ourselves though, we’ve got a bit to talk about here.

The story is fairly simple. Jamie Lloyd is still alive, and at the beginning of the film is giving birth to a baby surrounded by people dressed as Druids. A nurse helps her escape with her baby, and we find that she’s in the Warren County Smith’s Grove Sanitarium, the same one that houses Michael Myers who is also still alive and is trying to get to Jamie and her baby. Jamie is lucky enough to escape but Michael chases her down and kills her, but not before she can hide her baby.

We meet the new Strodes, with Kara being our lead, a single mom who’s in school with an eight year old son who has nightmares of the man in black from Halloween 5. They actually live in the Myers house, which resembles the same one from the first Halloween. Across the street lives Tommy Doyle, who you might remember was one of the kids Laurie Strode was babysitting the night Michael Myers came home in Halloween. For years, Tommy has been obsessed with finding the truth behind the motives of Michael Myers, and just may have the way to stop Michael once and for all.

Jamie is found dead and Dr. Loomis is back on the scene with Dr. Wynn, another character from the first film. Tommy is able to locate Jamie’s baby, and meets up with Dr. Loomis at the hospital. The two speak for a moment and connect the dots, meanwhile Michael returns to Haddonfield and start chopping through the new Strode family, leaving only Kara and her son Danny alive. Tommy and Dr. Loomis make plans to stop Michael and protect Jamie’s baby.

Tommy is able to help Kara and Danny stay safe at his house in the meantime, before revealing all he knows about Michael. He believes Michael has been inflicted the curse of Thorn by a Druid-inspired cult. Thorn is an ancient Druid symbol that represented a demon that spread sickness and caused destruction. To prevent this, one child from each tribe was chosen to bear the curse of Thorn to offer a blood sacrifice of its next of kin on the night of Samhain (Halloween). When the corresponding Thorn constellation appears, Michael appears. The curse explains why Michael is out to kill his family and also accounts for his superhuman abilities. Tommy believes that Steven (Jamie’s baby) will be Michael’s final sacrifice and in turn Danny will be the next child cursed by Thorn.

Tommy brings Dr. Loomis back to his house, just before the druids and man in black shows up. It’s here were we find out that the “Man in Black” is Dr. Wynn. The “Cult of Thorn” takes Kara, Danny, Steven, and Michael to Smith’s Grove. There Loomis confronts Dr. Wynn. Wynn credits him for first recognizing the evil the cult has inflicted inside Michael, and how Jamie’s baby represents the dawn of a new age. Loomis is then knocked unconscious by a cult member.

Tommy finds Kara locked in a room in the maximum security ward and frees her. Tommy, Kara, and the kids run, with Michael in hot pursuit, and hide in a high-tech laboratory. Inside the lab, Kara notices tanks containing human fetuses with a chart of runes and scientific letter codes, connected together by the Thorn symbol, suggesting that Dr. Wynn and his staff have been exploiting the evil power of Thorn for the benefit of medical science.

Michael breaks into the room. Tommy injects him with a corrosive liquid and beats him into unconsciousness with a lead pipe. As Dr. Loomis, Tommy, Kara, Danny, and Steven are about to escape, Loomis tells them to go on without him because he has “a little business” to attend to. Soon the screams of Dr. Loomis can be heard echoing in the sanitarium’s hallways.

Now that’s how the theatrical cut goes, but there’s a Producers Cut that, for the last twenty years, has only been available through tape traders. The story goes that production on Halloween 6 was problematic, with rewrites and arguments between the director, writer, actors and producers hampering production. I think the big appeal of the Producers Cut was that it changed a lot of story elements, and since it wasn’t readily available, people wanted it more. Now you can get it via the Halloween series blu-ray collection.

I enjoy Halloween 6, even today. It was the first Halloween film I saw in the theater, and the feeling of finally finding out what happened after Halloween 5 was great. I like that they did explain the man in black, answered why Michael Myers is pretty much indestructible, and brought Tommy Doyle and Dr. Wynn back into the mix. The idea here is pretty good, with Michael being just a tool for destruction and Dr. Wynn wanting to get the next generation going. I even like that Michael sorta realizes he’s just being used and slaughters pretty much everyone in the sanitarium.

The problem is, why did we need to know how Michael never dies? I mean, there’s no purpose to explaining it. Explaining it only takes the mystery away, the allure of it. I like knowing that Michael is this evil force that just can’t be stopped, as it makes our leads the underdogs who have to do everything they can to survive. If you know how he works, you know how to stop him, and after that, it’s pretty much not scary or even interesting.

I really don’t have an issue how the ending plays out, with Tommy beating up Michael and Dr. Loomis helping them escape. I know a lot of people complain about Michael getting beaten up, but there’s something so satisfying about seeing someone just say “fuck it” and beat the shit out of him with a pipe. It felt like Tommy was taking out the fan rage on Michael, those people who were just tired of Michael always getting back up.

I wish Dr. Loomis had more to do, but I am glad we get him and older characters coming back. I think this shows that someone during production was aware of the Halloween franchise history, and wanted to do it some sort of justice. The whole druid aspect, one one hand works to explain how Michael is the way he is, but there’s really no point to it. You basically have a killing machine you can’t control, what good is that? Seems like something a Bond villain would do.

The Producers Cut has a completely different ending, with Tommy and Kara and the kids surviving, and Dr. Loomis having the Thorn Symbol appear on his wrist like Michael, and becoming the “keeper” of Michael just as Dr. Wynn had been doing. There’s some other differences as well, like Michael not getting beaten up by Tommy, and we find out that Michael is actually Steven’s father! Yeah, I’m glad they cut that out too.

Acting: Donald Pleasance once again is Dr. Loomis, and when he’s on the screen, everything is great. Sadly, his role was cut down significantly so we don’t get to see him much. This would be Donald Pleasance’s last role, as he died shortly after filming. Say what you want about this franchise, Donald brought an air of seriousness to each film he was in. He gave credibility to the original film, and has been missed since his passing.

Paul Rudd has become popular over the last ten years for comedy, but he started here playing a grown up Tommy Doyle. He’s pretty much what Halloween fanboys are, obsessed about Michael Myers, unlucky with ladies, and just a creepy dude. Still, it was cool seeing him beat the crap out of Myers with that lead pipe.

I thought Marianne Hagan did a fine job as Kara Strode, our heroine. While she was smart in some cases, other times she seemed….stupid. Why did she jump out of a two story window? Who knows with this writing.

George P. Wilbur is back from Halloween 4 to play Michael Myers, and he does a good job. Michael seems more, pissed then normal. His mask is okay, not my favorite (part two is my favorite in case you were wondering), and this time he doesn’t look padded like Halloween 4.

Gore Factor: We get a spike to the head, a cut throat, impalement by farm equipment, an exploding head, and more! There’s plenty of red here without over doing it.

Nudity Factor: Random characters shows off her boobs, that’s it.

Fun Facts:
– Danielle Harris wanted to reclaim her role as Jamie, but turned it down when Dimension Films refused to pay her the $5,000 she wanted.
– Daniel Farrands’ original script was far more moody and psychological than the final draft. After reading the script, one of the execs at Dimension films could not sleep that night and therefore called Farrands immediately and told him that they wanted go forward with it. ‘Donald Pleasence’ himself supported the original script and immediately signed on to make the film only to find out that the script was being rewritten.
– The producers of the movie wanted Brian Andrews to reprise his role as Tommy Doyle from the original Halloween. However, Andrews did not have an agent, so they could not get in contact with him. He regrets missing the opportunity.
– You paying attention Ms. Woods?
– The original title of the movie was “Halloween 666: The Origin of Michael Myers”. There are even existing ad prints and early trailers with that title. Later, it became “Halloween 6” and finally “Halloween: The Curse of Michael Myers“.
– Rudd’s film debut; it was filmed before Clueless (1995), his first big-screen appearance.
– According to Joseph Wolf in the Halloween 25 Years Of Terror documentary, there was a bidding war between New Line Cinema & Miramax Films to make the film, but Miramax had won the bid.

Overall: I still enjoy Halloween: The Curse of Michael Myers, in spite of it’s flaws. I think it partially has to do with me seeing in theaters as a kid, and the last film to feature Dr. Loomis, one of my childhood heros. I think Halloween 6 wanted to answer questions that honestly, we didn’t need answered. Still, it’s worth a watch if you’re screening the franchise, and thankfully there’s no rappers using kung fu on Myers.