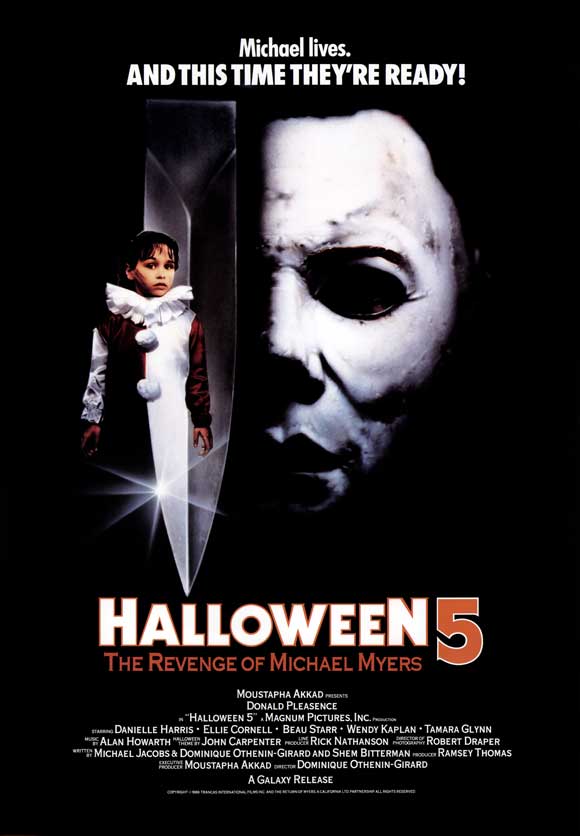 Plot: One year after the events of Halloween 4, Michael Myers returns to Haddonfield to get his revenge on Jamie, Rachel, and everyone else that gets in his way!

We get to see how Michael Myers survived being gunned down and dropped into a well in the last film. He fell to the bottom, crawled out into the nearby stream, and floated away. Meanwhile, Sheriff Meaker blows up the well, believing he killed Myers. Michael floats downstream and is saved by a hermit, who thinks nothing of the blood and white mask, and takes Michael in, and he lays dormant for a full year.

Jamie Lloyd, a year after stabbing her foster mother, is now living in a children’s home and is a mute. She has visions of Michael Myers waking up and killing the hermit, and wouldn’t you know it, it just happens to be Halloween. Dr. Loomis is still around and acting as Jamie’s doctor. Rachel is still around as well, although her parents are out of town on a trip. Rachel doesn’t last long, Michael easily dispatches her and we’re left with Tina, Rachel’s friend, to sorta protect Jamie. Dr. Loomis does his normal thing, weary of Michael coming back and trying to get Sherriff Meaker to take more precautions, meanwhile a man in black comes into town and is seen all over the place, watching Michael, Jamie, and Dr. Loomis. His intentions are unknown through the majority of the film, along with his identity.

The night of Halloween, Michael tears his way through a number of random victims, finally taking down Tina before Dr. Loomis and Meaker can get Jamie out of harms way. The two of them devise a plan to trap Michael in his old house and kill him, and even go as far as to have a swat team hiding in the shadows! Unfortunately, Meaker is easily tricked into taking his team elsewhere, leaving Dr. Loomis and Jamie alone in his old house.

The climax sees Jamie running all over what could only be considered a mansion of a house, nothing like the house from the first two films. Dr. Loomis eventually takes Michael down with a chain net and about six tranquilizer darts, and even then he beats him over the head with a 2×4 before falling on top of Michael, appearing to be dead from a heart attack. Afterwards, Michael sits in his jail cell, chained up, before the man in black appears with a machine gun, killing all of the cops and stealing Michael. Jamie is left standing in the police station, crying that Michael is gone.

Halloween 5 has a lot going for it, however the writers and the director seemed not know exactly what to do with everyone. The characters should be smarter, it’s been a year, they survived, yet they still make the same mistakes from the last film. Meaker doesn’t believe Loomis, Rachel seems to go off on her own, and Jamie puts herself in harms way. Why? Shouldn’t Meaker be aware of what could happen? Michael came back once, why wouldn’t he come back again? At least, at the very least, have a plan that doesn’t involve moving your whole police for on a whim. Dr. Loomis, he seemed to be the only one aware of what was going on and what was going to happen.

The pacing of the film is a bit off as well. We go from light hearted moments to kills, and the change between them is so quick it’s hard to care about the people getting killed. To make matters worse, the people getting killed mean nothing, we barely know them and have no reason to care. Rachel is dead barely half way through the film, and her replacement, Tina, is just a shitty character that’s hard to care about. Jamie is once again our lead, and she’s good to a point, but she should be smarter after last year.

The man in black is never explained, he’s got the same tattoo on his wrist that Michael does, but none of it is explained at all. Then he takes Michael at the end, why? The Myers house got a complete make over, suddenly becoming a three story Victorian era house, looking nothing like it did in previous films, and no, no one moved in and remodeled, all of Micheal’s stuff is still there from his childhood.

I do like how Dr. Loomis and Michael spend time on film together, with Dr. Loomis talking to Michael, like he’s still his patient. It’s rare that these two are on screen at the same time, so it’s a nice change of pace. I also liked the exchange between Michael and Jamie, but Michael taking his mask off and crying a single tear was not a good idea, as they didn’t play up how he was, ya know, set on fire in Halloween 2.

It seems at times Dominique Girard knew what he wanted to do, a game of cat and mouse, and for Michael is works because he’s, well Michael Myers. However, the mice he’s chasing are uninteresting, and quite frankly we could have used a better ending after how cool the last film did.

Acting:  Danielle Harris is once again Jamie, and she’s good as expected, I just wish her character was smarter.

Ellie Cornell does an okay job as Rachel, but all the toughness she acquired in the last film fighting Michael Myers is lost here.

Donald Pleasance once again delivers as Dr. Loomis. He makes the film bearable, and I really wish he had more screen time.

Don Shanks plays Michael Myers just fine, especially in the house when it’s him and Dr. Loomis, exchanging a rare moment on screen together.

Gore Factor: There’s not a whole lot of gore here. We get a garden tool to the face, a sickle beheading, knife in the chest, and a few other quick hits. Nothing bloody or gory.

Nudity Factor: The guys get a quick boob shot….that’s all.

– Rachel was originally supposed to be stabbed in the throat with scissors but Ellie Cornell felt it was too gruesome an end for her character, so it was changed
– On the audio commentary for the DVD, it is stated that Greg Nicotero and Wendy Kaplan were seeing each other during filming.
– Nick and Tom, the two “bumbling” cops with their own “clown theme” in the background, was an homage to a scene in Wes Craven’s The Last House on the Left (1972).
– Not wanting the heroine to be dressed like the Devil, director Dominique Girard had the Tina and Samantha characters switch costumes.
– In an article in the October 1989 issue of Fangoria, director Dominique Othenin-Girard claimed that the film’s ending was not scripted. Donald Pleasence stated in the same article that the film would contain the death of his character Dr. Sam Loomis.

Overall: Is Halloween 5 the worst film in the series? No, not by a long shot, but it’s still hard to watch due to the erratic pacing and uninteresting characters. Dr. Loomis is the only reason to watch this film if you ask me, and at least it follows Halloween 4 nicely.  I’d still rather watch this one then Bustaween.