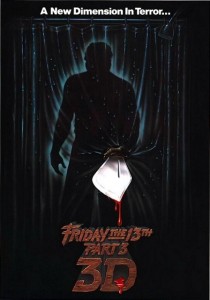 Plot: Jason Voorhees, having barely survived a wound to his shoulder from his own machete, is back for revenge on all that visit “his” woods. A new group of friends come over to party at an area close to the campsite. This time Jason will be stronger than ever, and will get a hockey mask from one of those friends.

Review: A New Dimension In Terror…

When Friday the 13th Part 3 starts, we find out that Jason never jumped through the window to attack Ginny in the last film, and that apparently she was the only one that survived, Paul had not. Jason is able to remove the machete from his shoulder and crawl away, moving onto another part of Crystal Lake to find more people to kill.

Jason doesn’t waste much time finding new victims, and now viewers get an idea of the size of Crystal Lake. Jason moves to another area where his fodder seemingly don’t know what’s been going on in the area. Even though the setting is still around Crystal Lake, the area has a farm look and feel to it, taking it out of the woods from the first two films and putting things out in the open.

We get our usual teenagers here, the pot smokers and practical joker, the sexpots and the serious ones. You could actually point to this movie as having every single teenager cliche in it, before they were cliches. One in particular, the practical joker Shelly, would change the entire face of the franchise, literally. Shelly introduces the world, and Jason, to the fabled hockey mask. A lot of people forget, Jason didn’t get the mask until the third film, and boy, did it change the series.

By the time the third installment of the franchise came around, the producers had decided to use a gimmick that was making its comeback in the early 80’s, 3D. 3D films have existed in some form since 1915, but had been largely relegated to a niche in the motion picture industry because of the costly hardware and processes required to produce and display a 3D film.

By the 1950’s however, technology had come along well enough that many films used 3D to enjoy plenty of success, and for the most part, the technology worked. However, as with all gimmicks, people got tired of 3D and even though the technology was good, it wasn’t perfected. So Hollywood did away with it, and the film industry wouldn’t bring it back around until the 1980’s.

Friday the 13th Part 3 (marketed as Friday the 13th Part 3D) jumped on board the 3D bandwagon but not just for a few scenes in the movie, but rather the entire film. I didn’t have the chance to see the film on the big screen, but thanks to HD TVs and the ability to put 3D onto DVDs and Blu Ray, I can get a pretty good idea of what people saw back in the day on the big screen.

The deluxe version of the film comes with a 3D copy of the movie and glasses, and I can assure you it does in fact work. Not all of it is perfect however, and some of the effects are quite gimmicky, but there are some things that stick out. There is a depth to the film the entire time, and it looks pretty damn cool. Scenes where trees are blowing in the wind, bugs can be seen flying around, popcorn popping and some other things look great. I mean, it’s nothing compared to the 3D movies of today, but you gotta think, 1982 3D technology actually working is pretty damn cool.

However, the film really didn’t need to be in 3D, and thanks to some of the best shots being centered around 3D, the movie lost a lot of its edge because 2D just doesn’t work the same. Some of the kills look really bad in 2D, and that’s a shame because I’ve always found the film to be pretty damn creepy.

Steve Miner, who directed part two, did a good job here with the pacing of the film. You get kills every few minutes, plenty of jump scares and of course, Jason finally gets a face. The film uses the creepy vibes from the first two films, and at this point the franchise wasn’t completely milked, so the formula works.

One of my very few complaints is Jason’s appearance from part two to three, and how it changes drastically. In Friday the 13th Part 2, Jason is a small guy with long hair, here he’s a big guy who’s bald, and yet it’s only been a day since part two! I know the reason for the switch to a bigger guy, and I can say that it was actually for the best, but it’s an annoying continuity error.

Another issue I have with the film is the subplot of Chris being attacked in the woods and coming out to face her fears. We find out the person that attacked her is Jason, and we see this in a flashback sequence. The problem isn’t with the idea, the problem is Jason is wearing the same clothes he does in this film, and those clothes he actually gets at the beginning of the movie! Big time error on the filmmakers part.

Even with the films issues, the 3D effects that work are cool and Friday 3 brings everything you could want. A little sex, a lot of kills, and Jason finally gets his face. Oh, and a funky opening song to boot.

Acting: Dana Kimmell did a great job as our leading lady Chris; she’s cute, soft and then tough as nails at the end. She really started the whole “fight back” movement against Jason, as where Ginny was more worried about running, Chris actually took it to Jason!

I had the biggest crush on super hottie Tracie Savage who played Debbie. Her character was preggo here, which is kinda glossed over. It’s odd that Jason killed a pregnant chick, and no one bats an eyelash.

Richard Brooker is a menacing Jason Voorhees. He’s a bigger dude and just looks far more scary then the last guy who played the role, he works perfectly.

Gore Factor: Here we go: loose eyeball, pitchfork to the neck, hand sliced off, cut throats, hot poker to stomach, hanging, eye popping out of head, cleaver to the chest, and more! The MPAA let this one get away with some stuff, there’s plenty of good swift kills here.

Nudity Factor: Tracie Savage gives us some boobs, and it’s great. Jason shows off his bald head for the ladies.

Overall: If you can look past the 3D effects, or at least watch it in 3D, I think you’ll find a pretty enjoyable Friday film. The kills are much better this time around and the return of some red helps. The writing takes a dip from the last film however, where Ginny talked about Jason being a poor kid who lost his mom, this time around Jason is just a killing machine ready to strike. Still, this makes for a fun watch, even though you can take it too seriously.