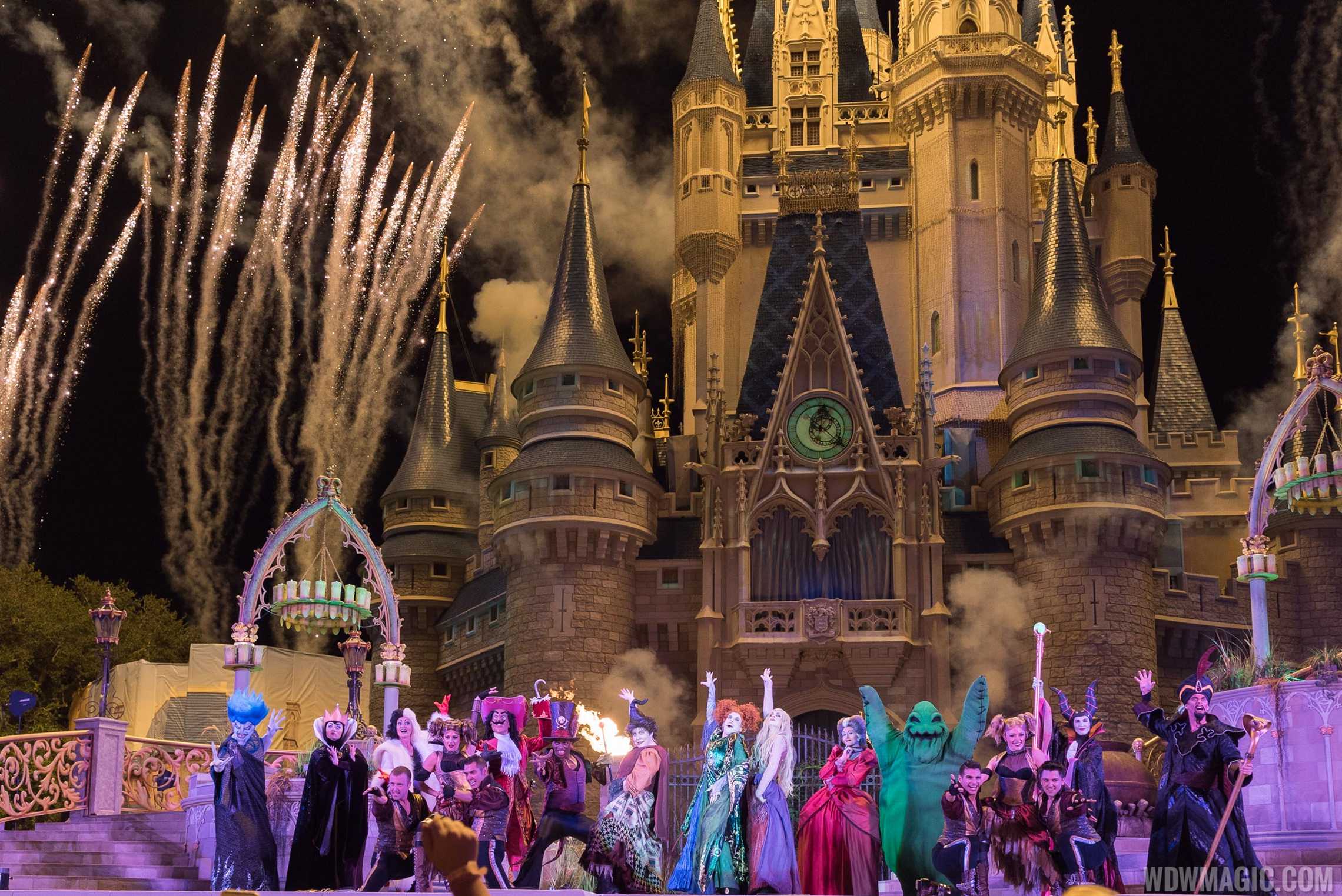 Background: For the last year rumors have circled on Facebook and throughout social media that a sequel to the early-90’s Disney flop Halloween film Hocus Pocus was in the works. The film, starring Bette Midler as one of the “famous” Sanderson Sisters of witches from Salem brought back to life and set to wreak havoc on the modern world only to be thwarted by some teenagers, has an avid cult following thanks to home video and incessant cable broadcasts during the Halloween season but no such sequel was or is actually in the works…save for this new show for the 2015 Mickey’s Not So Scary Halloween Party. Viewable only during event nights, the show replaces the Villains Mix and Mingle show from past years.

Show: The voice of Thackary Binx, the faithful black cat at the heart of the plot of the Hocus Pocus film, welcomes us to the night’s proceedings on the castle forecourt stage…adorned for the evening with a cemetery gate and a giant cauldron. Girls with candelabras begin to dance with some dudes wearing outfits that can only be described as a steampunk version of what the cast of a Tim Burton production of Shakespeare would look like while a Disney-fied version of “Season of the Witch” plays. Aaaand this show is already the most surreal thing I’ve ever seen.

The Sanderson Sisters appear and holy cow are they ever dead ringers for Bette Midler, Sarah Jessica Parker, and Kathy Najimy at first glance. Mary stops the singing and dancing to note that she smells children in the crowd. Winnie realizes that it’s been twenty-two years since they last appeared while Sarah reminds everyone that the sisters turned to dust the last time they were in the human world. Winnie says that this time they are back to celebrate Halloween and throw the biggest Halloween party the “land” has ever seen. Well that differs from the movie.

Sarah breaks into a verse of her “come little children” song from the film as a lead in to Winnie beginning the party with a magic spell. The spell first calls for sinister shadows. No sooner do the sisters wonder where they will find a sinister shadow when Doctor Facilier, the shadow man from Princess & The Frog, appears. He lets the sisters know that they are in HIS world now and he has friends on the other side…he even has a song to sing about it! The sisters are very interested in making contact with these friends (“master!”) so they draw three of his cards and decide to join him in the end of his song and dance number.

Thankful for his help with the first part of their spell they move on to the next ingredients: “nefarious nightmares as terrifying as the shadows of the moon at night…” Yes, it’s the Ooogie Boogie Man from Nightmare Before Christmas! He sings his song and is a little too creepy even for the evil Sanderson Sisters but they let him stick around for the party anyway.

With two steps in their “awesome Halloween party” spell complete, they consult the potion for the next ingredient: frightful friends. You see, a party is only as good as those you invite. The sisters realize they have no friends. Without the ability to complete their plan to throw the Magic Kingdom’s best ever Halloween party, they will turn back into dust. It is never explained why this is nor does it need to be as this show is nothing but an excuse to have random Disney villains interact with the Hocus Pocus characters. And hey, on cue, speaking of random Disney villains: out comes Maleficent!

She is pissed that she wasn’t invited to the party. Winnie says she will be invited if she helps them complete their spell by inviting some of her friends to come over. Why they would assume she has friends, I don’t know, since she shows up complaining about how she is never invited to parties. But whatever…the cemetery gate opens and the Evil Queen shows up with her poison apple, Hades parades out with a giant eyeball, Cruella brings along a bone for the potion, and Captain Hook donates his compass. Jafar and Cinderella’s evil stepmother strut out to complete the parade of Maleficent’s friends as the sisters realize they only need one more ingredient: the hair of an innocent. Well this should be good.

Sarah does her singing spell on one of the steampunk girls from the beginning and they pluck out one of her hairs and toss it into the cauldron, sending a beam of light and, I dunno, magic I guess, out into the sky. It is only then that the sisters remember that there is a giant crowd of people watching them and they need to do something about it. What better to do than put a spell on them? You know what song that leads to (it’s I Put A Spell on You,) as all the villains and dancers join in the final show-capping number. (One of the dance moves involves synchronized clapping…Captain Hook goes along with it because he’s a trooper.)

Fireworks erupt from the castle as the sisters instruct all of their now spellbound onlookers to go into the party and run amok. They are about to fly away when they realize that they forgot their brooms and must simply walk away. Binx bids us farewell and happy All Hallows Eve. Apparently the crowd is now under their spell for eternity…or something.

Thoughts: This show is fine and dandy for what it is: an excuse to have Disney villains sing and dance during the Halloween party. But most of the Hocus Pocus jokes and self-references are going to be lost on a lot of people. The movie has a big cult following but I don’t think it is anywhere near as big as Disney thinks it is to devote this whole show to it. Nevertheless, for a one year event it is fine. And who knows, if it is popular enough, maybe that will convince Disney to actually make that sequel.

If you’re planning a trip to Walt Disney World, don’t forget to check out my four part guide here at Place To Be Nation. Also make sure to check me out at Touring Plans and on my blog WDWorld Traveler. Follow me on Twitter @NeilTrama.