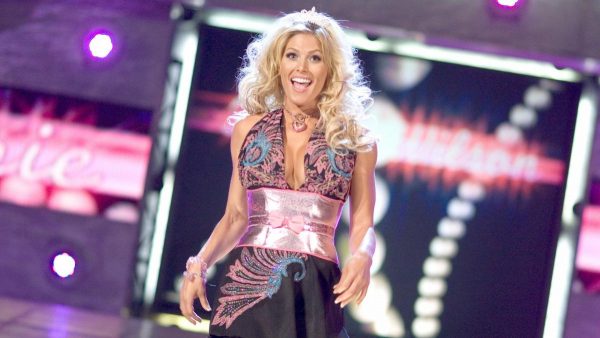 I have been threatening a LOT of people with this for a very long time, from my friends, to wrestling boards, to Tom on the Military Industrial Suplex Podcast this very week (check it out if you haven’t yet!). So enough teasing, I’m just gonna go right ahead and say it.

I do believe that Torrie Wilson is, in fact, the lost great worker of her generation.

I’m as surprised as you, trust me.

I never appreciated Torrie Wilson when she was around. On a list of wrestlers I was interested in during the 2000s she was somewhere near the bottom, and comfortably below her own dog, Chloe, whom I inexplicably always loved seeing on television. I was fully prepared to endure, rather than enjoy, Torrie’s sporadic wrestling matches as I went through the early years of this project.

Instead, she was my new favorite wrestler.

Life comes at you fast.

It was in 2002 that I started to notice it. She had a random Women’s Title match against Molly Holly and looked quite good in it. But of course, this is St. Molly of Minnesota we’re talking about, I expect nothing less.

But then she wrestled people like Nidia and she still looked good, which, no offense to people like Nidia, was a lot harder to explain. She was hitting her stuff really cleanly, busting out sweet clotheslines and dropkicks, and eating some offense right on the chin, from women AND men. Her bumping had noticeably improved out of sight.

This was all happening and confusing me just in time for the greatest storyline to ever live, the absurd angle with Torrie, her father Al and Dawn Marie. Now, this may be the definition of damning with faint praise, but Torrie was definitely the best performer in this whole damn wretched thing. The matches that she had with Dawn during the angle were shockingly good wrestling matches, and let’s just say that Dawn Marie never looked as good in the ring with anyone else.

Their Royal Rumble bout in particular, I spoke about this already but I remain convinced that this is basically a cinematic masterpiece. Torrie Wilson is a tragic figure in it, like the heroine at the end of a horror movie: she’s been physically and emotionally ruined and everyone she loves is dead. She’s been so beaten down and devastated by all these harrowing events that she can’t even bring herself to feel any anger or seek any revenge anymore, she’s just a shell of a human being, numb to everything around her. All is lost, nothing is left. She’s living but she’s not truly alive. Just existing.

All this from someone who was derided as one of the worst actors in wrestling. As they say in my country, get that up ya!

In fact, it was seeing all this Torrie and Dawn Marie stuff for the first time way back in January 2017 that made me think seriously about doing some sort of longform Divas project. If Torrie Wilson is doing good work I don’t know about, clearly further investigation is required! So, thank/blame Torrie for all of this, I guess (delete as applicable).

And the more I investigated, the more impressed I was with Torrie every time. She hit her stuff well, she bumped well, she sold well. She did spots with Shaniqua while wearing HIGH HEELS and lived to tell the tale. I was now actively looking forward to seeing her name crop up. My only issue at this point was that she just wasn’t wrestling regularly enough on SmackDown.

And therein lies the problem.

Torrie Wilson was stuck on SmackDown during the years there was almost no women’s wrestling on the show. The Women’s Title and women’s division were on Raw. SmackDown only ever had a couple of women around at a time, and nary a great wrestler among them. They mostly valeted and did bikini contests, while wrestling matches were infrequent. Torrie was on SmackDown for over three years and had less than 40 televised matches during that time, and half of those were mixed tags.

I look at the potential Torrie was showing me in 2002, and just imagine with despair the kind of wrestler she could have become in the next few years if she was on Raw wrestling with the likes of Trish, Molly and Victoria on a full-time basis. When you consider how many of the women in the same general ‘model-cum-wrestler’ bucket as Torrie turned out to be good wrestlers and Women’s Champions, she already looked heaps better than a lot of them were at the same point, and could have ended up being heaps better than a lot of them if things were different.

But alas. Verily I do curse thee, cruel world. 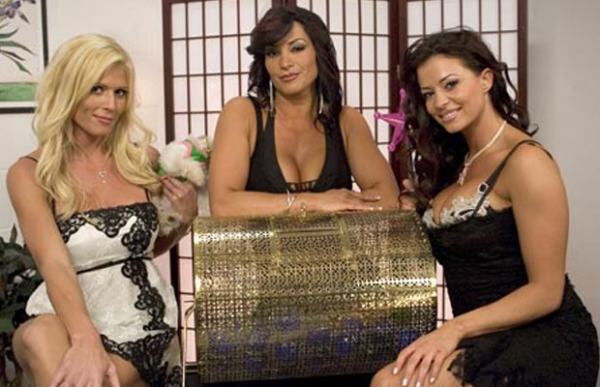 Even when she was on Raw in the thick of the division, circumstances still just seemed to get in her way. I enjoyed Vince’s Devils to a truly unhealthy degree, but Torrie was better as a babyface and she was working heel for her first nine months on Raw. When she became a face again, she still never got a lot of opportunities in the ring; 2005-06 was rough for wrestling in the division and even by Divas standards, Torrie’s matches were super short. Match ups that suddenly appealed to me on paper as I became a Torrie mark often left me frustrated, just because they were criminally abrupt or interrupted by other nonsense. As a wrestler, Torrie never seemed to catch a break.

But the glimpses are still there. Torrie the sweetheart was a natural babyface, but after a couple weeks with Vince’s Devils she started heeling it up and getting into a groove as a bad guy, niggling the babyfaces and using her dog’s arsehole as a weapon (a real thing that happened). Soon we get to a point where Torrie is callously dragging Ashley around by the hair and killing her with lariats and shit and it makes you think. Maybe Torrie WOULD make a good heel after all?

So of course she starts turning babyface the week after.

But babyface was, in fact, her best side, and when she once again became one she was showing out more and more by the week. 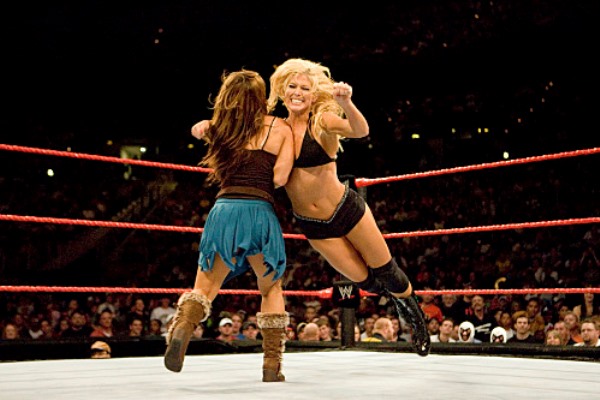 Mickie James had one of the best women’s matches in company history with Trish Stratus at WrestleMania 22. Hard facts. Less than two months later, she had a match with Torrie Wilson on Raw and it is RIDICULOUS how much Torrie looked like the better wrestler of the two. If you came in knowing absolutely nothing about these women, watched this match and had to guess, you’d probably assume that Torrie was the Women’s Champion, not Mickie.

Soon after that, Torrie had a match on Sunday Night Heat against Victoria. “Just a C show,” you think, “Awesome, surely she must get more time here!” Torrie knows it and is straight up WILDIN’ from the get go, doing ‘ranas and dives and dropkicking Victoria in the fucking face. And then… and then… Victoria tweaks her bad knee and they have to go home less than two minutes in.

Funnily enough, due to all this break catching, or lack thereof, it was often in the most nonsense of Divas matches that Torrie got to show off the most. She was the highlight of the Bra and Panties Gauntlet at New Years’ Revolution 2006, running in and hitting suplexes and spears and handspring back elbows for the heckin’ sake of it and then getting eliminated in a novel way. She was back hitting even more bombs in that ridiculous Paddle on a Pole with Candice Michelle I covered in the B&P piece. She had another good B&P match with Melina just before she got traded to Raw, where she was inventing new ways to win and taking ridiculous Trish bumps on her head to the floor. If there could possibly be such a thing as a Bra and Panties match specialist, Torrie Wilson was probably it.

But still, this is all Torrie doing her best with the varying degrees of nonsense she was given to work with, until, finally, It happened. Ironically it wasn’t until she moved back to SmackDown in 2007 that It happened. But nevertheless, IT HAPPENED.

Torrie Wilson got to have a whole match! With a wrestler! For four and a half entire minutes! No bullshit! No interruptions! No terms and conditions! No hidden charges! No interest on the first 12 repayments!

Relatively speaking this may as well have been a WrestleMania main event. 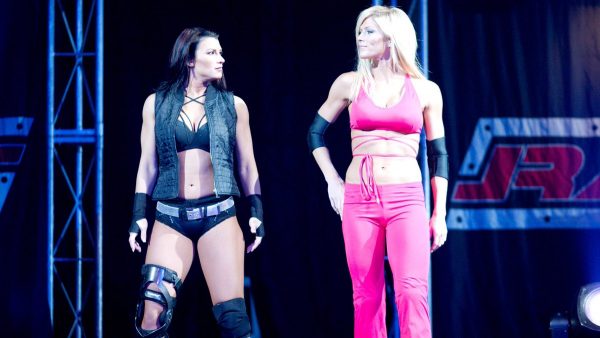 And the point is, she got four and a half minutes with Victoria on SmackDown and it rocked! Victoria beat the absolute Holy hell out of her and Torrie was fighting the heck back for her LIFE and ended up dropkicking Victoria in the FACE so fucking hard her head flew right off her shoulders. You have to SEE this thing. They got another four and a half minutes the week after and rocked some more and at this point I drop to my knees, look up to the sky, and cry out to the heavens, “WHY COULDN’T YOU LET HER WORK LIKE THIS EVERY WEEK FOR THE LAST FIVE YEARS???”

Torrie basically spent the rest of 2007 being awesome with Victoria and it looked like somehow, some way, she was finally going to get the workrate run to make all my wildest hopes and dreams come true. But alas, the breaks remained un-caught. Torrie was having serious back issues and ended up quietly retiring by the end of the year. And thus, the idea of Torrie Wilson: Workrate Hero remained just that, an idea; abstract, elusive, floating out into the atmosphere for over a decade, until it came crashing back down to earth, and right on top of my head.

Torrie Wilson truly knocked me on my ass.

This is why I was so gosh darn happy when she came out during the history making, first time ever, all women’s Royal Rumble Match. Not only that I got to see her again and she got to throw clotheslines like it was 2006 again, but also how she was received. Torrie’s name has so often been used as a kind of slur, a codeword for “Diva” or “bad wrestler”, and here she is making a run in on a “real” match post-Revolution in a PPV main event in front of the smarkiest crowd in the world, Philadelphia. And they popped. And they chanted “TOR-RIE WIL-SON!” And my heart swelled until it burst. I died a thousand times during that Rumble match, but that may have been my favourite part. The redemption of Torrie Wilson.

My whole raison d’etre is now the redemption of Torrie Wilson. If there’s one thing I want to get done, one preposterous, flaming hot take of mine that I want you to absorb, it’s this one. Torrie Wilson really wasn’t that bad at all. Fuck what ya heard.

Next week we head in a different direction, from a surprisingly good wrestler to the greatest wrestler of all time. We have another important anniversary coming up folks…