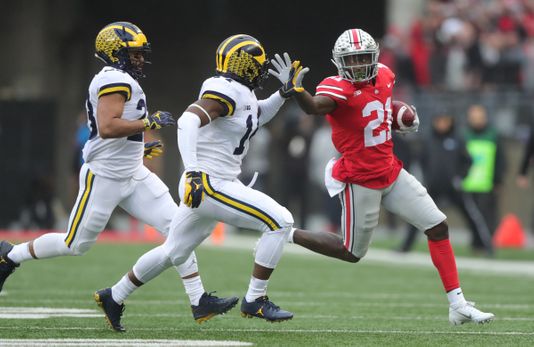 Two weeks remain (Well one really…only one game next week). This coming weekend is the conference championships, and the last chance for the playoff rankings to change. After rivalry weekend, we have a change in the Top 4. Scott & Logan dive into the Hot Takes!

7 OT Madness: Looking at the slate of games from Saturday this past weekend, LSU-Texas A&M is the one that peaked my interest the most going in. Despite this, I had no idea what I was in for. Controversy clouded the end of the regulation period as a game clinching interception by LSU was overturned because A&M quarterback Kellen Mond’s knee was down after he picked up the fumbled snap before throwing said interception. This was only the beginning of the madness. What came next was seven of the craziest overtime periods I’ve ever been witness to.
It involved a very controversial near fumble turned incompletion by A&M that may have very well clinched the game for LSU, a catch of the year candidate by Kendrick Rogers, and pretty much
no defense. After 7 OTs and a record 146 points A&M converted a 2 point conversion to end this incredibly crazy and awesome game. LSU fans have every right to be upset with this result
as they had the game seemingly taken away from them twice and ending their probably unlikely but possible playoff chances.

Eggs-istential Crisis: In more recent years the Egg Bowl between Mississippi State and Ole Miss has become more and more built upon the animosity between the two programs. One player
who had revenge on their mind was MSU QB Nick Fitzgerald. A year after this very same team broke his ankle, he wanted nothing else but to dominate his in state rival. He did not disappoint,
as he lead his team to an easy 35-3 victory with his 3 total TDs. While Fitzgerald’s redemption was a huge part of this game, it wasn’t the big takeaway from this game. On the last play of the
third quarter on an AJ Brown TD catch, which was eventually overturned, MSU’s star CB Jonathan Abrams and Brown start going at it verbally before both take swings at each other.
This lead to both benches completely clearing and multiple ejections. In the days following this game the SEC had come out and said that they want this game to become “cleaner” and “less
toxic”. A meeting between the ADs of both universities and the SEC Commissioner has been set up to help figure out how to make this possible.

Alabama Takes Care of Business: Going into this game, nobody particularly gave Auburn a chance to win this game but in rivalry games anything can happen. Through the first half it appeared that Auburn was at least going to hang with them, only being down 3 at half. Tua and Bama then proceeded to do what they have seemed to do all season and that is completely
dominate the second half. They were able to pull away, holding Auburn to only 7 points in the second half, and winning the game 52-21. The SEC championship lies ahead for Bama, in
which they will have a rematch of last year’s National Championship game against Georgia. These are the two teams we all thought we’d see here at the end of the SEC schedule and I for
one can’t wait to see how it turns out.

UCF Loses QB in Regular Season Finale: UCF has been the Cinderella team ever since going undefeated last year and beating Auburn in the Peach Bowl to finish it off. Throughout this season as well, the Golden Knights have remained unbeaten while dominating most of their opposition. McKenzie Milton, who is the QB for the Golden Knights, has played a gigantic part in
this current 24 game winning streak the Knights are currently on. Unfortunately in Friday night’s regular season finale against the USF Bulls, Milton scrambled late in the 2nd quarter only to
stay on the ground after being tackled as he had sustained a horrific leg injury. While the Knights were and are unlikely to make the playoff, if they do manage to slip in, they will very
much miss their leader and QB in any remaining games left.

Red River Shootout, Part II: As a Big 12 fan there is no bigger rivalry than the one between Texas and Oklahoma. Fans of both teams look forward to this game each every year and is
made better when the teams are both competitive and good. Well, good news for fans you get to see this game twice this year. Coming off shootout victory over West Virginia, Oklahoma now
looks for revenge on the only team that has defeated them all season in Texas, while Texas coming off of close victory to lowly Kansas looks to ruin Oklahoma’s season and playoff
chances for a second time. Something tells me this will be a shootout and will be an absolutely must watch game.

One Task Complete: Notre Dame needed to finish 12-0. Simple as that. They would be pushed out of the Playoff by another 1-loss team if they stumbled. Well after playing a pretty awful quarter and a half, with USC jumping out to a 10-0 lead, ND turned things around and held on for a 24-17 victory. Ian Book ran for two clutch bootleg first downs to sustain drives and end with points. Now, unlike the other three teams in the playoff right now ND gets to sit back and wait to see who they play December 29. Two years after finishing 4-8 and Brian Kelly’s future in limbo, he’s a Coach of the Year candidate.

I don’t want to be Pitt: The Tigers had relied on their strong, consistent defense to take charge in game after game this season. When things broke down in a big way against rival South Carolina, Clemson’s offense took charge in a 56-35 victory to finish a 12-0 regular season. Trevor Lawrence threw for a career-high 393 yards and Clemson finished with 744 yards when its defense gave up 600 yards and five passing TDs to the rival Gamecocks. Saturday Clemson goes for win #13 against Pittsburgh in the ACC Championship. Honestly, they should just skip it. Pitt has no chance to even cover the 26 1/2 point spread. Dabo Swinney wants Nick Saban, pure and simple. No one, not Pitt, ND or anybody else will get in his way.

Did Harbaugh even try?: This season for Ohio State has been anything but normal, beginning with its celebrated coach suspended for three games. There have been spotty performances and troubling trends on both sides of the ball. There has been constant speculation and questions about Urban Meyer’s health and future. After all that, it was business as usual against Michigan, and now the Buckeyes are right where they always expected to be. Dwayne Haskins threw six touchdown passes , freshman Chris Olave had a breakout performance and No. 10 Ohio State continued its mastery over No. 4 Michigan with a record-setting 62-39 victory Saturday that sends the Buckeyes to the Big Ten championship game. The Buckeyes should beat Northwestern, and then pray for Alabama & Texas.

Change needed in Tallahassee: I’ve said it over and over again, but Willie Taggert needs to go in Tallahassee. Florida State ends their regular season with a 41-14 loss to #11 Florida. The Seminoles will sit home this bowl season after finishing 5-7, the first missed bowl season since 1982. That’s totally unacceptable on that campus, the first losing regular season since 1976. Taggert is over his head, and Florida State needs a fresh face or an established winner, not a haggard, broken down mid-major cast off. Perhaps a team in Orlando has a fine candidate?

The Cougars had their chance: Washington State had a chance to shock the world and maybe give the playoff committee something to think about. Instead they once again were bullied and pushed around in a 28-15 Apple Cup loss to Washington. The Cougars haven’t won the Apple Cup in a while, as Jake Browning finished his career a perfect 4-0 against WSU. The Cougars will go to a great bowl game, but Washington can go to Pasadena with a Pac-12 title win over Utah.

So with Michigan’s loss, this is what the situation is:

So, we know ND is locked in, and Alabama probably is too (unless Georgia wins like 56-0). We will lump in this week’s conference championships, and the Army-Navy game next week. We will return in two weeks with the full playoff and bowl schedule, and our thoughts on all of them. So, enjoy!

Saturday 12/8
Army vs. Navy (If Army wins, they win the Commander-In-Chief trophy)