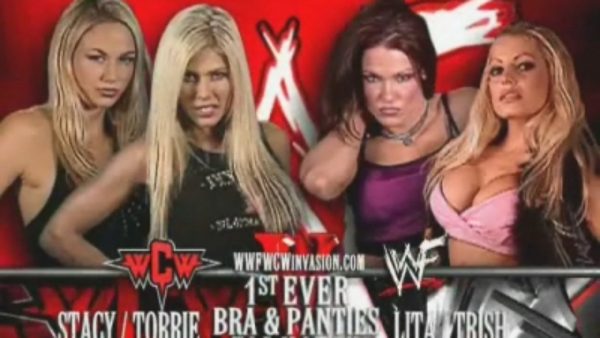 Yes, of all the subjects I could have chosen for this week, leading up to the first ever all-women’s WWE PPV, we’re going to talk about Bra and Panties matches. Think of it as a “how far we’ve come” moment. For whatever issues they’ve had building to Evolution, it is still going to be light years removed from… well, this.

And yet, I am here to tell you that the Bra and Panties match is not without its charms. No, not those charms. Wrestling charms! Yes, really. Bear with me.

As I went through and watched them all, the interesting thing about the Bra and Panties matches is that they actually were… interesting.

Of course, the problem – well, the wrestling problem at least, obviously there are MYRIAD real problems with this sexist bullshit that I already yelled extensively about in the beginning. But the issue in a purely wrestling sense is that they stemmed from a major logic hole: a match where the loser’s clothes are removed, involving popular babyface women whom the crowd wanted to see with their clothes removed, neccesarily makes the crowd want the babyface to lose the match, and thus her clothes. This leads to absurd situations like the face being booed for “kicking out” of an undressing, or fighting desperately to keep her kit on during the match only to happily strip for the crowd moments later after she’s won.

But if you get beyond that plot hole, the matches themselves were worked in a fascinating way. Honestly, they often seemed to employ more internal logic (and wrestling moves) than a lot of regular matches.

Almost every time I watched a Bra and Panties match I noted to myself with surprise just how much wrestling there was. Sometimes it would be someone hitting suplexes or power moves that they wouldn’t otherwise attempt. Sometimes it was some nifty hold or counter they’d use out of nowhere. But most of the time, it was because of the rollups.

I think it was at InVasion in a tag team B&P match that It happened for the first time. It being, Trish Stratus rolling Torrie Wilson up into a pinning combination and taking her pants off while she was upside down. Nifty, right?

Once this B&P match hack was discovered the whole game changed. Next time someone went for the same rollup but they got reversed and beaten. Other women tried doing different types of rollups to get their opponent upside down. Then they’d get countered on the ground into even more pinning holds. Suddenly we get to Stacy Keibler vs. Torrie Wilson on July 4th 2002 and they go into a full blown, balls out, Eddie vs. Dean rollup counter sequence in the middle of a Bra and Panties match.

Now on the surface, doing a big Eddie vs. Dean gambit in a match without pinfalls sounds pretty silly and I’m sure you all laughed. But it’s not silly! They’re not going for pins, they’re trying to get the pants!

Torrie Wilson and Dawn Marie had a B&P match when their feud of the century had cooled off to a gentle simmer after Royal Rumble 2003. They tried all the tricks, including the rollups, and ended up coming up with a new position entirely: draping someone over the top rope to un-pants them. It was fun stuff, and again, very clever. But Tazz sniggered halfway through about how, “Well, this is no Benoit vs. Angle…” and this infuriated me like you wouldn’t believe because honestly, he was right. This definitely wasn’t Benoit vs. Angle.

Torrie vs. Dawn was worked WAY smarter than that bullshit.

As the years went on, more and more Bra and Panties techniques were developed. The tops were always easy enough to remove, so they key to victory was still in getting your opponent into a vulnerable position to get those pesky pants off.

For example, Candice Michelle had started using a Tarantula variation when she started wrestling, and when she used it on Maria in a Bra and Panties Gauntlet match, Maria escaped and used Candice’s convenient upside-down position to steal her pants. Candice learned the lesson and the next time she was in a B&P, SHE used the Tarantula position to take Melina’s pants off from underneath. Learned psychology!

Another one of my favourite B&P finishes was again in the aforementioned Gauntlet, when Torrie started arguing with the ref about something or other, even going so far as to try to hit him. As the referee blocked Torrie’s shots by grabbing her hands, Maria came from behind and pantsed her! (Fair dinkum that whole Gauntlet was fun as all get out until the disappointing, Mae Young-related finish.)

When Trish Stratus returned to TV in 2005 after injury she had a novel approach to being in a Bra and Panties match: wear ridiculously large boots over ridiculously tight pants. Good luck ladies – those bad boys ain’t coming off in a million years! Living Legend Trish wasn’t fucking around.

Even better was the fatal four way at Great American Bash 2006. Michelle McCool was doing her heel schoolteacher thing, and during the match someone ripped off her skirt only for her to be wearing another, smaller skirt underneath! More genius!

My favourite Bra and Panties match (imagine having such a thing!) is one of the very last ones, Melina vs. Candice Michelle in early 2007. Ashley was getting the Playboy push that year, so Women’s Champ Melina vowed to go through all of the Playboy covergirls on the roster. As Melina railed against these women for taking their clothes off, Candice came out to defend the Playboy sisterhood, dared Melina to try to take HER clothes off and challenged her to a Bra and Panties match!

Logical build, storytelling, stakes… this thing had everything!

The match itself was good too. Candice did the Tarantula spot I mentioned before. They also did some fun wrestling on the ground, where they were working holds but someone reaching for an item of clothing left them open to be countered into another hold, then the other guy would reach and get countered, and so on.

I can’t stress enough how fascinating it was to watch the women incorporate the task of trying to grab your opponents’ clothes into wrestling matches, and come up with solutions. I adore the idea of “problem solving” in wrestling matches.

It reminds me of something I noticed in the Trish Stratus vs. Mickie James matches. The first time they faced each other during the storyline, Mickie had a hammerlock on and Trish found herself stuck. She couldn’t do the ‘bend down’ counter that Triple H taught her, because that would push her ass into Mickie and she didn’t want to give her the satisfaction. Then when Trish did counter and put a headlock on, Mickie just groped her breast to escape it. Trish was struggling, because she was trying to wrestle without leaving her body vulnerable to these unwanted advances. Mickie was basically using sexual harrassment as a defensive tactic, and Trish in turn had to solve the problem of trying to win the match AND defend herself from wandering hands at the same time.

It’s easy to focus on Bra and Panties matches as a kind of Divas Era shibboleth but there are examples of this kind of creative problem solving in all of the “sexy”, exploitative Divas matches. I already talked about the legitimately fantastic, BAZILLION STAR LINGERIE PILLOW FIGHT. There was that Trish vs. Stacy Mud Match where Trish was thrown off the stage into the pool, so they could at least elicit “Holy Shit!” chants and get a highlight reel bump in before having to splash around like morons.

Speaking of splashing, even the damn water fights were fun! There was one on SmackDown that Victoria made her own, wearing floaties and a snorkel to the ring, slipping and sliding around, and taking a bloody Styles Clash from a 100lbs. woman in the middle of a puddle. There was also a water-related battle royal in 2007 that was basically a perfectly fine battle royal disguised as a water fight.

When the Divas Title was created in 2008, the first contenders for the championship were both decided in ‘Golden Dreams’ matches – basically, pole matches. Now, pole matches are pretty universally terrible but honest to God, the second Golden Dreams match may be the best pole match I’ve ever seen. Once again, the women were the masters of getting the best out of two minutes and a shitty stipulation.

Speaking of poles, in 2006 Torrie and Candice had a Paddle on a Pole Match that has to be seen to be believed. 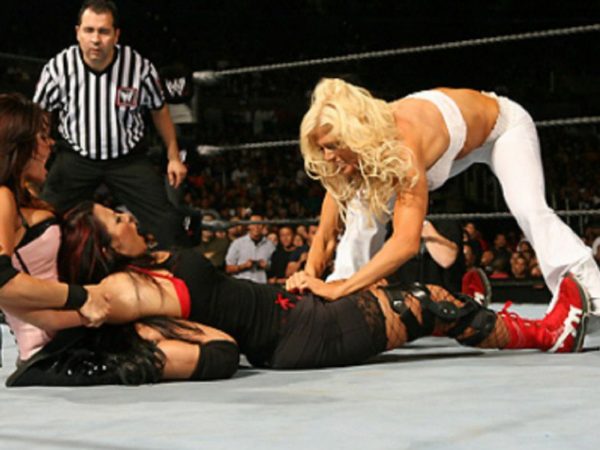 The prize for retrieving the paddle was getting to spank the loser, but Candice graciously offers her own ass up first and they just end up spanking each other and giggling and what the fuck am I doing with my life that I’ve ended up here writing about this stuff in earnest.

My point is, even with all of the stupid sexy bullshit, and even with the girls having to throw kayfabe to hell to dance or strip or playfully spank each other afterwards, during the matches themselves these women are still trying to make it work. Still trying to approach these absurd ass stipulations from a wrestling angle and figuring out cool ways to incorporate wrestling moves or psychology into them.

My mantra throughout this entire series has been that you can find good wrestling absolutely anywhere. Even in the middle of a Bra and Panties match, if you look hard enough. I used to think rollups in these matches were silly, but then I looked again and realised what they were trying to accomplish and the logic involved. Which is more than can be said for a damn lot of regular wrestling matches.

Given these preposterous situations, I thought the Divas often did a great job to hunker down and work the matches as well as they possibly could. Which is all we could ask of them, really.

The matches listed below are what I would describe as the best, most fun B&P-style matches. If you don’t believe me, have a look for yourself.

Next week I’m going to tackle someone who has featured heavily in this piece, and who will also feature this Sunday at the Evolution PPV. If I’m still alive after watching the Evolution PPV that is.