Art and cover by Dale Eaglesham
$2.99

Thaal Sinestro has lost everything he’s ever loved: his home, his family, his only friend. But no matter how desperate he becomes, Sinestro will never be without fear…a lesson his one-time ally, one-time enemy Lyssa Drak is eager to teach him! Can he take back the despicable Yellow Lantern Corps? Or does the universe have a new destiny in mind for Sinestro?

Picked because: It’s about time Sinestro (and his entire Corps) got his own title! What’s really selling this one is the fact that Cullen Bunn got the writing gig. He’s already made a name for himself with his incredible The Sixth Gun series, but the way he’s handled Magneto for Marvel shows this guy really knows how to write a villain as a sympathetic hero. But just because you can feel for the guy, doesn’t mean he won’t be hardcore, too. Sinestro’s brand of justice won’t mesh with the Green Lantern Corps, but it’s not like they’ve had much luck stopping him either. This is a step in the right direction for the Lantern Line of DC’s New 52 and a much more in-demand one than certain previous series (ahem, Red Lanterns, Larfleeze). Right now, all of the Lantern titles are going strong with their current creative teams, so this is likely to be a welcomed addition that any GL fan needs to try out. 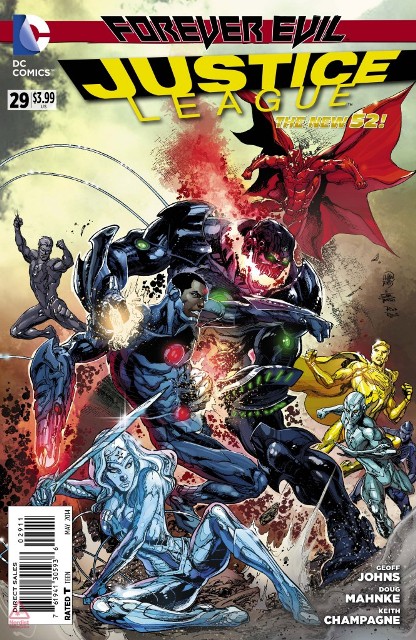 The Crime Syndicate couldn’t kill him, but will Grid destroy him? Cyborg heads directly for the Syndicate with the Metal Men at his side. But can Vic Stone stop his cybernetic half? And how will this battle against the most brutal and evil beings in the universe change Cyborg and the Justice League?

Picked because: Oh it’s finally time for Cyborg and The Metal Men to get in on the action! After a couple of incredible issues focusing on introducing new fans to The Metal Men concept and characters, it’s time to put them against The Grid, Cyborg’s former body-turned-sentient evil-Crime Syndicate tank. At first, this seemed like the battle we could all skip in Forever Evil, then Geoff Johns turned it into the battle we probably need to see most. Cyborg’s character arc has been the most developed in all of Forever Evil, largely thanks to the Justice League tie-in issues. Despite the delays in Forever Evil’s shipping (we could talk all day about that), the event has been largely successful and hugely entertaining. Tie-ins are always hit and miss, but Justice League has been nothing but hit after hit after hit. This is the last issue of JL before the big Forever Evil finale’ and will likely take readers right to the door step of Forever Evil #7. If you haven’t picked up any of the tie-ins, you really should have been picking up Justice League. And if you didn’t before, after this issue you’ll be clamoring for a Cyborg and The Metal Men title! 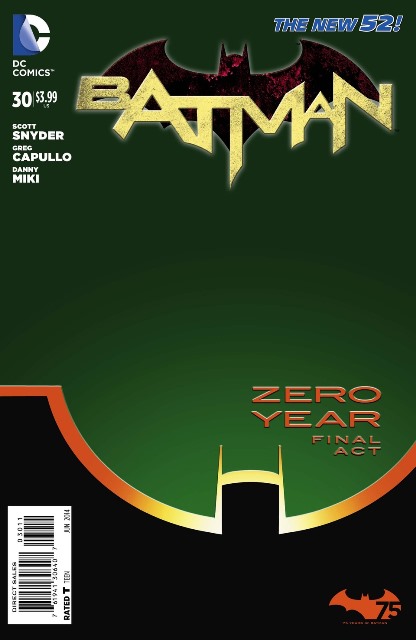 Picked because: The final arc of Zero Year is finally starting and Gotham City looks like a post-apocalyptic wasteland. Batman is cut off from his usual supply line and support so he’s got to find a way to survive in this harsh environment. We saw this as a tease in the first issue of Zero Year (which seems so long ago now), so it’s great to finally be at that point in the story. ZY has been going for what feels like an eternity, but at least the quality of story has never dropped below amazing. What’s going to be interesting is to see how The Riddler plans to make Gotham stronger through this dramatic turn of events. And there’s no way Scott Snyder and Greg Capullo are done introducing us to young versions of Batman’s infamous rogues gallery. Poison Ivy was teased heavily in the last arc, so expect a more formal appearance at some point in this one. Oh, and even more mouth-watering art from Capullo, of course. 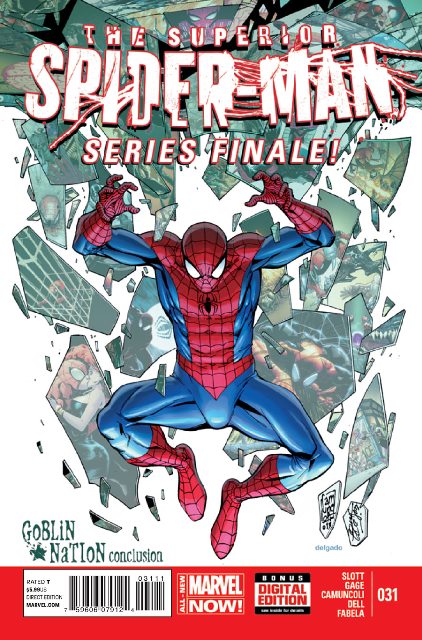 • SERIES FINALE! The end of an era! A tale of triumph and tragedy! The GREEN GOBLIN unmasked! A hero reborn! But what does this mean for OTTO OCTAVIUS?!

• There’s only one man who can save us from the Goblin Nation… PETER PARKER: The one, true SUPERIOR SPIDER-MAN!

Picked because: Peter Parker is back! Oh, sorry, spoiler alert…if you’ve been living under a rock. Last issue saw Doc Ock make the ultimate sacrifice and truly become a hero like no one believed he could. Even those who’ve been reading the series were taken aback by that move. He brought Peter back and dubbed him the true Superior Spider-Man just in time to take on the Goblin Nation. This last chapter of this hugely-popular series is going to be one for the ages. Green Goblin has burned everything Ock worked for to the ground, but now he’s going to face the one true Spider-Man. With a new volume of Amazing Spider-Man ready to launch at the end of this month, this is must-read comics, folks! Dan Slott has proven himself to be an even bigger evil genius than Norman Osborn and Otto Octavious combined, so this finale’ should be nothing short of mind-blowing.

• The Minotaur shakes hands with the king of the trolls!

• And in the far future, King Thor is overwhelmed by the fury of Galactus!

Picked because: How do you kill a god? The Minotaur is determined to find out so he can get Thor out of his way. What his full plan truly is all about hasn’t been revealed yet, but as this story reaches the half-way point more questions are likely to be revealed in this issue. Then, in the parallel story in the far future, King Thor is going head-to-head with Galactus in what should be the biggest battle either has ever had. The over-arching question between both stories seems to be “why fight for Earth if it’s already beyond saving?” Both old and young Thor are struggling with this question, but with vastly different perspectives. It’s what’s made this story one of Jason Aaron’s best. Oh, and that Esad Ribic guy…he’s pretty good, too. (Now taking votes for understatement of the year) It might be strange to jump in at the half-way point of this arc, so while you’re at your local shop or online, grab the previous two issues. You really shouldn’t be missing out on this series, anyway. 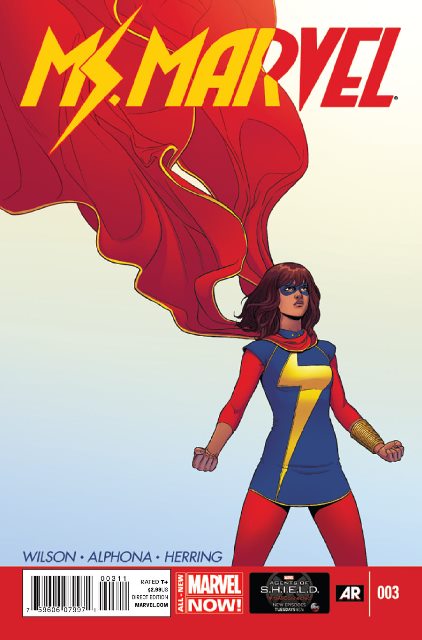 • But in Kamala’s case, star-power comes with a whole lot of… awkwardness.

• Find out why the most exciting new Marvel hero is also the most loveable!

Picked because: A young heroine discovering her new powers can feel like a familiar trope, but G. Willow Wilson has written Kamala perfectly so far. What makes this book so much fun is that you feel like you’re there with her throughout the whole experience. It’s easy to overlook little things when you’re reading a grandiose superhero epic, but a story like this makes it all about those little character moments. Kamala’s introspection comes off as genuine and, at times, adorable. It’s hard to name many current comics writers who have the ability to convey that sort of character. As the larger story unfolds and the tie to the new Inhumans gets closer, this title might be harder for new readers to jump on going forward. Now would be a good time to find out why so many reviewers (me included) love this title so much. For all the complaints out there about there not being enough books that can cross boundaries and get younger readers excited for comics, this is easily the answer to that. Marvel’s solo hero titles have a reputation of being fun an accessible, this one’s no different. Jump in, it’s a great ride! 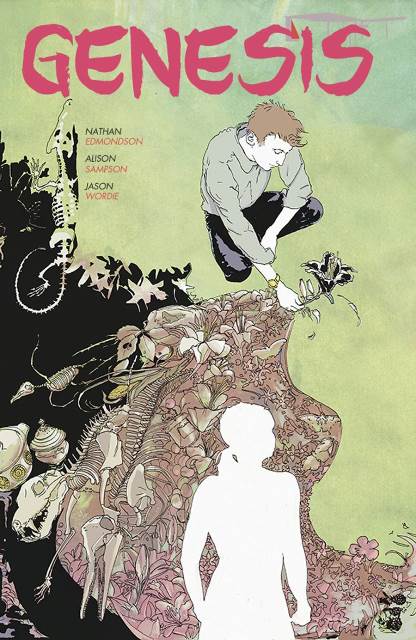 Art and cover by Alison Sampson
$6.99

A trippy journey of creation and destruction as one man finds himself with the ability to manifest anything by thinking it — only to learn that with seemingly unlimited power comes unstoppable terror.

Picked because: Nathan Edmondson is a bit of an enigma in his writing these days. On the one hand, he’s got Black Widow and The Punisher at Marvel and he’s doing a killer job (PUN!). But then, there’s Genesis. This is a venture into the truly weird parts of the human imagination. How dangerous can one thought be? Plenty! What would you do if you had the power to change the world with just your imagination? How would it affect you? These are some deep questions to explore and this should be a fun ride all the way through. Alison Sampson’s art pushes the boundaries of comic art and lets the imagination run wild in order to create a unique feel that could be compared to Travel Foreman’s Animal Man or J.H. Williams, III’s Sandman: Overture and still not be like either of them. The twists and turns are sure to make the story weave in and out of reality leaving readers unsure of what’s real and what’s imagined. In the end, it may all be in one man’s head. These are the kind of stories you’ll wind up examining over and over again, looking for the little nuances and signs pointing toward something bigger. And at since this is a full novella, rather than the start of a new series, the whole story is available in a single reading. If you want something beyond the norm, this is your pick this week.