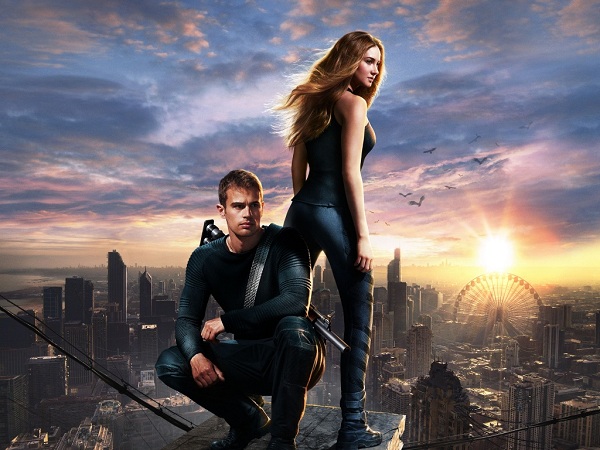 Quick disclaimer: this is not a conventional movie review. Divergent was released a few weeks ago and and the intention of this piece is to share some thoughts I had after watching this movie, both as it relates to the story and the manner in which that story was told. There are some plot spoilers ahead.

Here’s the premise of Divergent in a nutshell. Future society, things are run down, the population is divided into five “factions”, each with a single defining characteristic – smart, brave, selfless, honest and loving. Individuals are born into a faction and raised by their family, all of whom are members of that same faction. At the age of sixteen, everyone chooses whether to remain with their faction, and their family, or spend the rest of their lives with a new faction. A sizable section of the population is “factionless”, which means they belong nowhere and are dependent upon the generosity of others – I’m looking at you, selfless – in order to ensure survival (apparently there are no “backsies” in the future).

The viewer is immediately informed that the story takes place in Chicago, which I found interesting because it could have easily occurred in some fictional locale. This told me that this story intended to say something about America in particular. I kept this in mind as I watched the film.

Our heroine is named Beatrice. She’s sixteen and about to choose whether to remain in the selfless faction with her parents and twin brother.  On first look she’s a sweet and slightly bland girl, which works because the selfless are a sweet and slightly bland people. But Beatrice casts longing looks at her peers in the brave faction, otherwise known as Dauntless. At no point is there any doubt as to which faction she’s going to choose.

This basic story would seem to hold a lot of appeal to teenagers. Faction selection is a turning point in these characters’ lives, similar to what many 18-year olds face when they graduate high school and move away to college, get jobs, find mates and make families of their own. It’s transition. It’s deciding whether to stay with your family or carve your own path. To say goodbye to your home, and all the comfort it embodies, in order to explore the world and your options. This is one of the most significant life events we go through, likely the most significant at that stage of our lives.

Right away, I feel that I’m watching a meaningful movie. It takes on heavy themes which we can all relate to and which make us feel something. This movie is not satisfied being a trifle or distraction, which automatically makes me more interested in it.

There’s one important fact I’ve not mentioned, a fact so important you can use it to title a movie.  Before each individual chooses a faction, they take a test – a drug-induced virtual reality simulation – which reveals the faction for which they have an aptitude.  In this new-fangled Chicago, 95% of the population has an aptitude for only one faction. The few individuals with an aptitude for two, or more, factions are classified as *trumpets blasting* “divergent.” Guess which category Beatrice fits into?

Beatrice is a heroine our self-involved society can get behind, and this is where the story’s American setting becomes relevant.  As mentioned, the vast majority of people in this story have essentially one character trait.  I’m brave.  She’s smart.  He’s honest.  But not Beatrice, no sir. She is selfless, brave and intelligent – quite the goodie bag. How fitting a story for a culture in which many spend more time by themselves staring into a screen than with others staring into their eyes, that our heroine is a multi-faceted superstar stuck amongst so many dull, narrowly-defined people.  Beatrice is literally better than everyone else around her. Not really a message I want to impart to my tween daughter of the future, already so smug with her Google Glass and hover phones.

At the choosing ceremony, to the shock of every character and zero viewers, Beatrice pledges to join Dauntless. This is very American. We abandon our family at an early age, having learned all we can from them, and move onto thrilling adventure. The Dauntless are responsible for protecting the city. They wear black, jump off of moving trains and eat hamburgers like they’re going out of style (It’s actually not all that surprising she left her family behind).

Quick digression: I mentioned earlier that this story addressed, and took positions on, meaningful issues.  But there’s a difference between a good story and a story told well. In my eyes, Divergent falls short of the latter. The movie spends about seven minutes establishing the faction system, each faction’s identity, the main character and her family, before we watch her decide to abandon the only life she’s known in favor of a new adventure. When she chooses to leave her people, it should mean something to us. The magnitude of her decision should resonate. It doesn’t, because the manner in which information is quickly presented, glossed over and moved on from makes it clear that Beatrice’s life to this point is a necessary evil we need to sit through until the real movie can begin. And that’s a wasted opportunity for this story. You gotta milk that shit!

From this point forward, the story tracks the newly christened “Tris” on her new adventure. Think of society as a college and Dauntless as her chosen sorority. Tris is surrounded by strangers, with whom she’s competing, and forced to engage in combative activities on which she’s essentially being graded.  The bottom rung of cadets fall out and join the ranks of the faction-less. Welcome to the world of free enterprise, Tris.

Tris, a stranger in a strange land, befriends some fellow recruits and makes googly eyes at her hunky instructor, who looks like a sober James Franco. Experiences are had, knowledge is gained, Tris struggles to stay ahead of the curve while trying to learn more about what it means to be divergent. The story hits the expected notes, while hinting at a conspiracy amongst the factions which will inevitably leads to class warfare and multiple sequels. Noteworthy characters are killed early in the story and the final body count is higher than one might expect from young adult fiction.

The establishment of consequences made me more invested in the action. But that only goes so far.  Movies need to have characters the viewer cares about. The better job done building up characters, and the uniqueness of the relationships they share with the hero, the more we care when something awful happens, when loss occurs. Think of the movies we mock – the loner cop out for revenge after his partner gets killed (Picture McBain from the Simpsons crying out into the sky, “Mendoza!”).  We mock them because they’re lazy, because we know the partner only existed in that movie because he needed to die and motivate the hero to do something. He only existed relative to the hero’s needs. We recognize the convention, the seams are visible, and a good movie will focus on its hero, but introduce supporting characters interesting enough, with enough detail, that we can imagine someone making a movie just about those characters.

And we’re not given a lot to care about these characters. Tris’s new friends are each given a clearly defined trait – Christina is sarcastic, Al is a coward, Will is CONSTANTLY scratching his ass and then sniffing his fingers. You get the idea.  The problem with that is that when one of these characters was killed off at a climactic point in the film I didn’t give a shit. Contrast that with a much more effective loss occurring later in the movie when Tris loses someone else close to her. She kneels in an alley and the actress makes you believe that she’s experiencing the most painful moments of her young life.  She doesn’t shout to the heavens in a war cry. She stammers and pleads. She borders on hysteria and then she reigns it in, cause shit is going down all around her and mourning is a luxury she can’t afford. The fact that her moment is cut short is what makes that moment so effective. This is a chill scene and badass storytelling. But such moments are the exception in this film.

As the movie progresses it’s revealed that, just as modern politics would have us believe,  intellectuals are the true villains of society. Tris gradually sheds her cloak of shyness and takes the lead in combating the threat. For reasons I need not go into, because they don’t entirely make sense, Tris finds herself battling everyone, friends included, with only Sober Franco by her side. Because family drags you down, friends want your stuff, and romantic love is the real endgame.

Exposition regarding secret alliances, family secrets and civil uprising are crammed into this poor girl’s story. The movie creaks under the weight of the storyteller’s ambitions to create an epic, and the effect is like trying to stuff a turkey into a Hot Pocket. There are some good flavors in there, but you’re left with a mess.

The movie ends on an emotionally satisfying note with lots of room for the aforementioned sequels. Criticisms and jokes aside, this is a movie, at its core, about an insecure young woman who realizes she’s stronger than she thought. She doesn’t excel at everything, but she keeps working. She’s not comfortable in her own skin but she embraces new experiences. These are good lessons for an impressionable youngster to absorb.  At the end of the day this was a story worth telling and I can’t argue with that.