Welcome back, fellow traditionalists! As we discussed last year, I am a huge fan of yearly traditions and mark the days, weeks and months by them. So, here we are on the Fourth of July, and besides cookouts, fireworks and, apparently, hurricanes, that means it is time for the 98th annual Nathan’s Famous Hot Dog Eating Contest. Grab some mustard and a glass of water and settle in as we recap the festivities!

We kick off this year’s installment with a video package setting the scene. We have a large native New Yorker narrating the history of the city and taking us inside Coney Island while also putting over the seven-time defending champion Joey Chestnut. The narrator makes a good point, noting that Chestnut probably ingested a lifetime’s worth of hot dogs in less than a decade. Apparently that narrator was one of our competitors today.

Cari Champion is on the beat and chatting with the champ, who is oozing confidence as always. He is targeting his personal world record of 69, set a year ago. He loves hot dogs, Independence Day and America and assures us he is empty and loose. Well, then.

Not even the rain has deterred us this year, as we still have a jam packed crowd filling the streets of Coney Island. We head back to earlier today where Chestnut proposed to his girlfriend of three years right on stage! And she says yes! What a magical moment. The hot dog eating champion proposes to the love of his life with a dancing hot dog mascot hopping around behind him. Amazing moment. She truly is now the bun to his foot long.

Next up, we get a quick reminder that you must qualify to get your way into the contest, and then you must weigh in once you arrive. We head live to the stage area where Paul Page and Rich Shea officially welcome us to the affair and chat some more about Chestnut, natch. Page notes that Coney is home to Chestnut, just like Tiger Woods at Augusta and Yankee Stadium to Derek Jeter. ESPN also tosses up a neat little graphic highlighting Chestnut’s recent dominance: 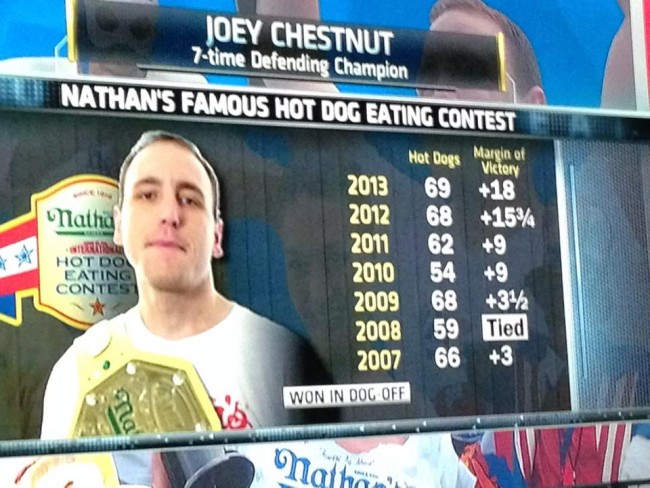 He has really upped his game since 2010 and last year he just destroyed the field, finishing an astonishing 18 dogs ahead of the second place finisher. Amazing run.

We head back to clips from last year when the defending three-time female champion Sonya Thomas was victorious in her competition. However, this year she has a really stiff challenge in the form of Miki Sudo, who claims to have defeated Thomas in ten other head to head face-offs. Sudo also set the California state record, knocking down a robust 40 dogs. Her goal is to break the world record of 45 and is she is very brash about her chances. We get some clips of the female competition that has already taken place, narrated by Paul and Rich. We discover that Miki did indeed wrest away the title with an impressive 34 dogs, falling short of her ultimate goal but waxing Sonya by 6 1/4. Cari caught up with Miki who vows to be back to set the world record and gives props to Sonya as well before heading off to party. 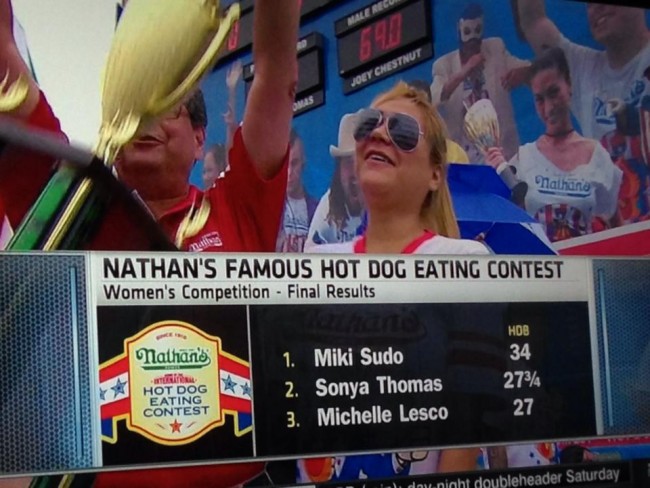 After a break, we receive a history lesson of the last 15 years of the Nathan’s contest. The memorable Takeru Kobyashi  dominated for years until Chestnut took over the mantle in 2007. Apparently due to all his Nathan’s success, Chestnut has been able to just commit full time to practicing for these contests and live a relaxing life with his now fiancé in San Jose, CA. Rich Shea flew out to the west coast and hung with Joey as he began preparing for the contest. Chestnut lays the wood down on Kobyashi, vowing the former champion will never defeat him on Independence Day. Eventually he wants to return to his normal life of construction management but for now his focus is on eating. The package features clips of his training while Shea quizzes him on his goals. Joey notes that he wants to get 70 plus and also chats about the evolution of the game over the past ten years. Shea puts over an up and comer, Matt Stonie, that should be presenting the biggest challenge here in 2014. In fact, he even topped Joey in a gyro eating contest recently, but Joey mentions that it took him years to learn his body and master this craft, so it shouldn’t be expected for this kid to step up and dominate right away. Joey believes his max could be 73 if the conditions are perfect and he has his best day.

Back to the Island, Rich and Paul break things down and note the weather is getting worse now, so those perfect conditions Joey was waxing on about are unlikely to occur here this year. Shea wonders if Stonie can get it done on the big stage and that is the questions we are all pondering. As Cari Champion visits with Stoney and discusses nothing of consequence, I want to take a moment to remember our sideline reporter from last year, the wonderful Renee Herlocker. You are missed, Renee. Please come back next year. 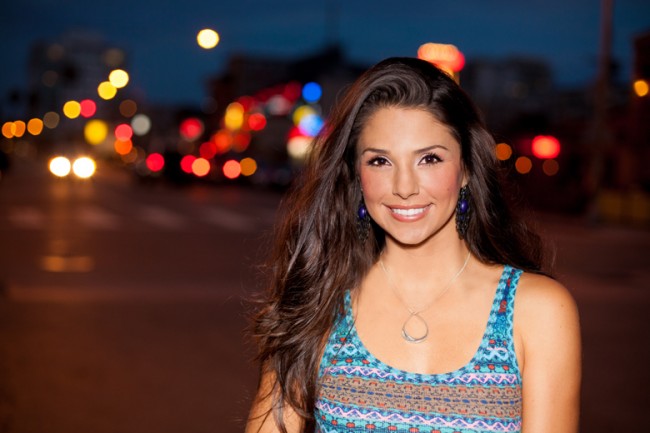 After a commercial, our contestants break down their strategies to victory, and Paul and Rich run down the official rules for us. We are hoping to get this one in before Hurricane Arthur makes its presence known. Before we kick off, we get our annual Sports Science segment. This year, John Brenkus has an anthropomorphic dummy to demonstrate what it is like to have 69 hot dog inside of your body. Hoo boy. He spends the next few minutes jamming hot dogs down the gullet of the dummy, using a hot dog stuffer to jam them down. Science tells us that most humans can stomach one liter of food before nausea sets in, which signals us to stop eating. However, competitive eaters are trained to ignore the reflex, which allows their stomachs to hold over four liters of grub! As your stomach expands it pushes all your other organs out of the way to make room. This is fucked up. And here is what your stomach looks like with 69 hot dogs, 69 buns and two quarts of water crammed into it. 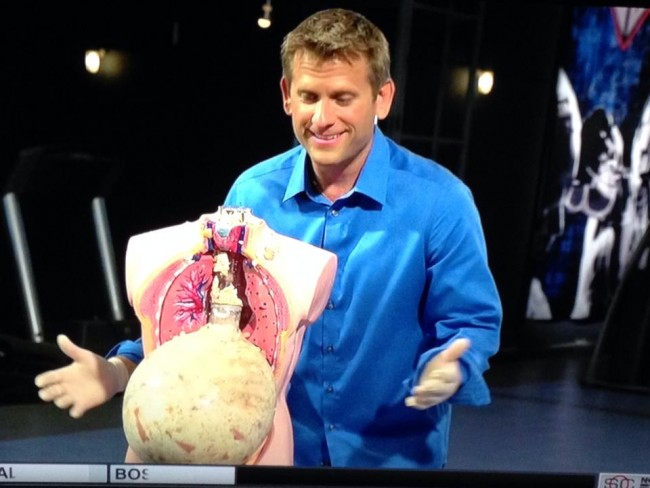 Eating that many hot dogs is the equivalent of 20,000 calories! In theory, if you slowly rationed out that many calories, a person could survive for four months. Absurd. Thanks John!

And it is now finally time to light this candle. George Shea is in the house as emcee as always and is starting to introduce our competitors:

Pablo Martinez (#17 in the world and a great bowler)

Adrian “The Rabbit” Morgan (From New Orleans, he has eaten 4.25 pounds of catfish in 10 minutes and once ingested 20 hard boiled eggs in 1:24)

Brian “Dud Light” Dudzinski (Boycotts all healthy food and has eaten 7/25 corned beef sandwiches in 10 min; he weighs a ripped 190 lbs while standing at 6’2″ and has abs like the Situation)

Tim “Eater X” Janus(Absurd back story, he was basically raised as an animal in the Arctic, features Ultimate Warrior face paint and is the champion of the world in eating Tiramisu) 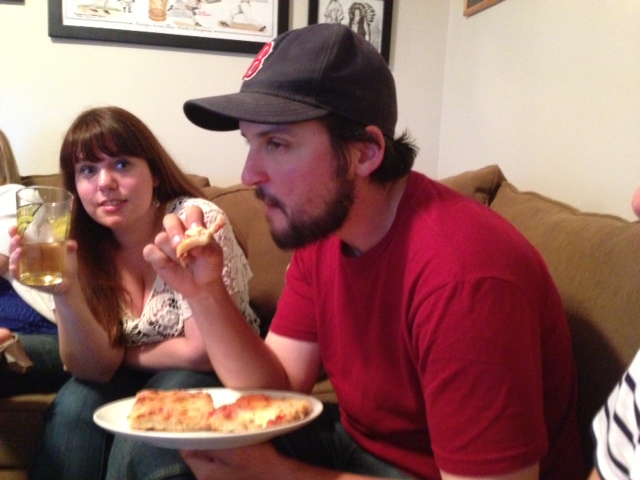 As always, Shea was a beast with these introductions and I do them zero justice. Watching this is worth it just for the stories he tells during these entrances. Chestnut is carried in on his throne, as always, and gets a rousing ovation. Joey also holds work records in 32 other events, including Twinkies (121 in six minutes), Bratwurst (70 in ten minutes), Vanilla Ice Cream (15 pints in six minutes), Pulled Pork Sliders (62 in ten minutes) and Hard-Boiled Eggs (141 in eight minutes).

The announcers continue to push the Chestnut vs. Stonie feud hard, hoping for a legit challenger here this year. Here is how they stacked up head-to-head so far in 2014: 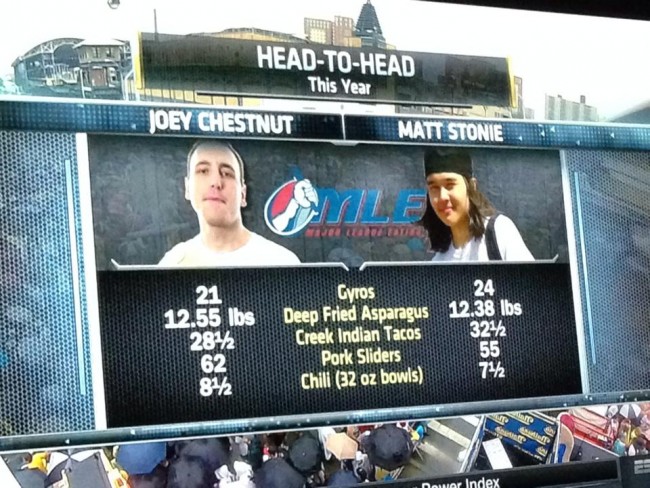 Stonie has pushed Chestnut this year, beating him twice and finishing in a very close second three other times. The countdown is on and we are under way in the rain! The hot dogs begin to fall and Stonie is even with Chestnut through the first thirty seconds. Paul compares Stonie’s bite to Luis Suarez to keep things topical. Stonie is just one dog back at the 8:50 mark and only Janus is even close to them. Astute commentary here noting that Stonie needs to get a lead now because all of Chestnut’s competitors tend to fall off as the time ticks away. At 7:40 they are tied up at 20 with Janus hanging in at 18. Nobody else is within 10 of first place at this point. Chestnut and Stonie are averaging about eight dogs per minute right now as we hit 6:40. The military guys are doing their best and get a nice little spotlight segment for a few seconds. As we tick past 5:40, Stonie leads by one hot dog, and both he and Joey are on a record pace. Forty seconds later and Stonie is up by two dogs. Could we see a new champion? It looks possible…

Chestnut’s new fiancé is stageside, looking quite nervous as Stonie leads by three as we close in on 4:00. The crowd starts to rally Chestnut but Stonie is maintaining his lead. This is a hell of a contest, much better than last year’s rout. And as we reach 3:30, the game is tied back up. Janus is now 12 back so it is officially a two man race but Stonie is starting to signs of fatigue. As we hit 3:00, we are all tied up. The pace is down under seven dogs per minute, so no longer on that record pace. At 2:30, Stonie and Chestnt are knotted at 49 dogs. As the rain continues to pelt the contestants, our champion has pulled slightly ahead at the 2:00 mark. Things remain even as we tick past 1:20 and Stonie is really giving this thing a ride. Chestnut is up by one as we reach the 1:00 mark. Stnie is fading quickly and Chestnut is hitting the gas, now up by four dogs at the :35 point. Stonie closes the gap to two but Chestnut puts him in the rear view mirror for good, as the clock hits zero with Chestnut up by three dogs. Man, what a contest. Stonie gave it all he had but Chestnut takes home his eighth straight Mustard Belt. 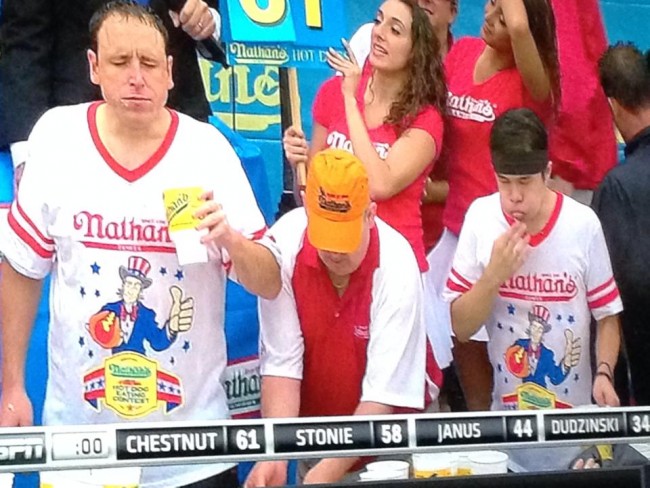 While Chestnut did pick up the win, he did not come close to his 2013 world record, falling short by eight dogs. George Shea has our official results which differ slightly from the numbers above. Janus takes home third place, Stonie takes second place with 56 dogs and Chestnut wins supreme with 61, so he ends up beating Stonie by five to keep his crown. Chestnut blames the weather for slowing him down and keeping him from the record, but he will take home yet another belt.

That will do it from Coney Island. Until next year, enjoy your holiday weekend and celebrate your freedom to eat processed meat at a record pace whenever you feel the desire to do so!