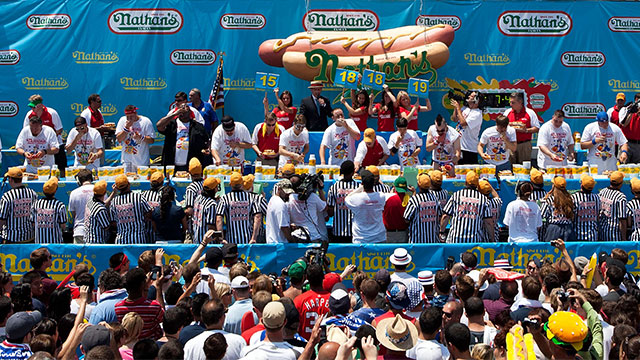 I am a man of traditions. I like to mark my year by certain events, parties, holidays and other special traditions. Somehow, the Nathan’s Hot Dog Eating Contest has become one of those. I couldn’t care less about competitive eating at all and the majority of it kind of makes me sick. Yet, for some reason, my eyes are always drawn to the ESPN2 cameras staked out around Coney Island come noon on July 4th. With that said, here is a running diary of the the 2013 edition.

12:00PM: The Brooklyn Community Chorus performs Eminem’s Lose Yourself as the ceremony barker George Shea rises up on a large elevating podium. Shea is rambling loudly into the microphone, and I have no idea what the hell he is saying, but between the song and his tone, I am getting all fired up. And so is the Coney Island crowd that has gathered along. He officially kicks off the contest, leading us to a nostalgic New York-centric video package. The package also focuses on the heavy favorite, Joey Chestnut. Chestnut has dominated the competition since 2007, racking up Mustard Belts in addition to a variety of other eating competition championships.

12:03PM: We get clips of the Nathan’s crew prepping the hot dogs and some more hype courtesy our lead announcer, Paul Page. He is joined by Rich Shea, who I assume is related to Barker George. Page tells us Chestnut is going for his seventh straight title today. And here are his results for the first six:

I need to know what happened in 2010. Did he pitch to the score? Maybe he noticed the weak field and knew he didn’t have to go overboard? Was he tested for HGH right beforehand? What could it have been? We learn that Tim “Eater X” Janus and Matt Stonie are the biggest threats to Chestnut’s consecutive title streak.Stonie defeated Chestnut in asparagus in the past and Janus came in second in 2012 and 2010 (45 hot dogs, so I bet Chestnut definitely backed off down the stretch).

12:06PM: We get a narrated piece on Superstorm Sandy, which ripped through Coney Island last October. The Original Nathan’s officially reopened just before Memorial Day, which was a big sign of the continued rebuilding of the island. This piece was well done, just basic and not heavy-handed in any way. It is a compelling story and they let it breathe. Nice job on this one, ESPN.

Markowitz talks about Coney Island and Independence Day. And I think he just said Disneyland, and all other amusement parks, is a Coney Island wannabe. Marty is on a roll. It is affordable, funky and in your face. If that won’t get you there, I am not sure what will. I wonder how many hot dogs Renee could put down. Nathan’s has donated a large sum of dogs to the food bank, so good on them as well.

12:13: During the past week, the competitors hung out in Manhattan, prepping. Mayor Bloomberg presided over the weigh-ins  where he set the record for hot dog related puns with 15. On the scale, Janus checked in at 165, while Chestnut weighed in at 210. Renee chatted with Joey after the weigh-in and he is quite humble for a six-time defending champion.

12:15PM: If Joey wins today, he will break the record for most consecutive championships. He is currently tied with Takeru Kobayashi, who won six. The next closest is Mike Devito with three. I wonder if that is the same Mike Devito that plays for the Jets? Probably not.

12:17PM: Time for a video package highlighting the two-time defending women’s champion, Sonya Thomas. She wants to break her personal record today and also hit  a 50 spot. Thomas used to compete against men until they finally broke through and created a female division. Augusta National could learn a thing or two from Nathan’s. The women’s competition went down just prior to this show going on air, so we get to see some highlights. Sonya defended her title by an amazing margin, winning 36 3/4 dogs to 36. Poor Sonya looked like she was about to die. That is a pretty crazy razor thin margin to win by. 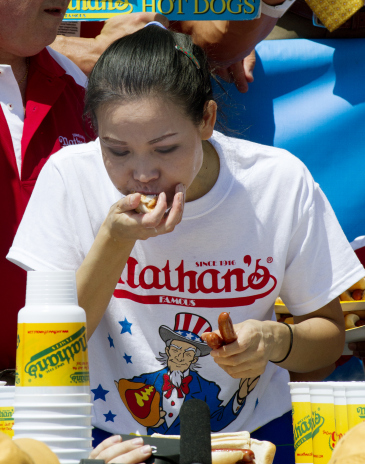 12:21PM: Coming out of a commercial, we get a Chestnut profile. He says everyone thought Kobayshi was unbeatable, but he proved them wrong. That you did, Joey. Page lets us know that the judges have been sworn in as we inch closer to bell time.

12:22PM: ESPN Sports Science takes an depth look at the sport of competitive eating. To do this, Chestnut battles John Brenkus in a practice contest. Joey ate ten by the time Brenkus ate one. The first key to Joey’s dominance is his jaw and the masseter muscle, which some eaters train by chewing up to five sticks of gum at a time. The Science team has measured the force of an eater’s bite at 280 lbs. of force, which is a stronger bite than a German Shepherd  Secondly, they rely on peristalsis, which helps the food move through your esophagus. That is in addition to the Valsalva Maneuver, which entails plugging your nose to help clear your ears and squeeze the food down through the esophagus as well. He uses gravity in all this in addition to training his stomach to expand by 400%. The reason many eaters are thin is because body fat takes up stomach expansion space, so eaters stay fit to allow for expansion room.Brenkus ate three hot dogs in five minutes, while Chesnut ate 30 dogs, consuming 9,000 calories (which is how much the average person eats in five days). That was really cool.

12:25PM: Renee is with Sonia Thomas and Juliet Lee, the runner up. Renee asks Juliet how she got to 36. Come on Renee, you are better than that. Juliet is really hard on herself, saying she lost focus and looked around too much during the competition. I like her spirit. Sonya is happy to have won, but is not happy with her low dog count. She believes she started slow and then got nervous late and had to push to catch up to Juliet. Can either of them eat six pieces of pizza during one period of a hockey game?

12:30PM: It is now time for the George Shea show as he introduces the competitors, with each receiving a nice little biography from Shea along the way. Here are the entrants:

Marcos Owens (#28 in the world and he is angry today)

Aaron “The A-Train” Osthoff (#8 in the world, hates the urban legend that Elvis died on the toilet)

Jeff “The Beast Man” Butler (A rookie that joined competitive eating instead of SEAL Team Six, or something)

Bob “Notorios B.O.B.” Shoudt (He will be remembered long after the world ends)

Adrian “The Rabbit” Morgan (#6 in the world)

Tim “Eater X” Janus (He is a superhero that eats anger, hatred and violence; he has Ultimate Warrior face paint on)

Joey Chestnut (The Champ, #1 in the world)

And there is your field. Shea does a hell of a job introducing these competitors, especially Chestnut, who gets a King’s welcome. He is even carried to the stage in a Nathan’s throne! He is from San Jose, I wonder if he trains with Dave Meltzer? 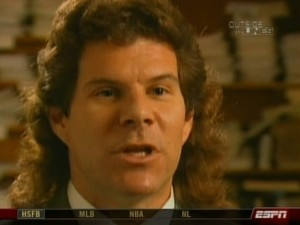 12:45PM: And we are finally underway as George Shea kicks things off with a countdown! Chestnut is off to a quick lead. ESPN knows what they are doing as they have flanked Chestnut with Stonie and Janus. At the 8:30 mark, Stonie pulls ahead by one dog and Page reminds us that Stonie stole the asparagus title from Chestnut earlier this year. Little Shea compares Janus’s second place finishes to Phil Mickelson’s US Open struggles. Sounds about right. Chestnut regains the lead around 7:30 and thirty seconds later, Chestnut consumes his 400th career hot dog. We are told that Chestnut’s goal was 45 dogs in the first five minutes. The announcers then thank Ronnie Hartman for his service and I do the same. Apparently George Washington and his troops once ran right down this same street. I am sure this is what they had in mind at the time as they fought for the country’s freedom. 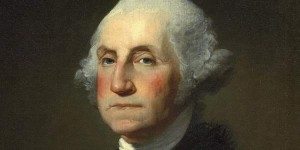 Chestnut has pulled ahead by six as we hit 6:00. Renee joins us to inform that Joey has a new coach this year, his girlfriend. His usual coach is his brother, but he is away serving with the Coast Guard this year. Chestnut hits 41 by 5:00, falling short of his goal. However, he still leads by six. Not much excitement here as Joey now leads by eight with 3:45 to go. Little Shea wins me over with a Ron Swanson meat reference. The lead is now ten at the 3:00 mark. Shea pisses away that goodwill with a Mark Sanchez dig. Leave the poor guy alone, would you? Shea lauds Chestnut for his tape watching during preparation. Page wonders if he coasts down the stretch or shoots for the record. Joey is up by 13 with 2:00 to go. Renee tells us that Joey didn’t feel like he had a chance at the record because he didn’t get to drop as much weight as he hoped. ESPN messes up the score graphic, giving Joey six more dogs than he has consumed. Come on, guys. There is no suspense here, as Joey is up by 18, but he is closing in on his record. He needs two more in :15 to break it. Can he do it?

Yes he can! Joey Chestnut squeezes that last dog in at the gun to break his own personal world record and finishes with 69 hot dogs consumed in 10:00. Oh, and he also wins his seventh straight title.

12:58PM: Renee is with Joey Chestnut, who calls 69 a “magic number”. So coy, even with a belly full of processed meats. Joey is fairly composed for everything he just went through. He thanks his girlfriend for keeping him going because he would have gotten lazy along the way once he had the lead. Page is impressed we saw a world record set in this type of heat. Chestnut’s personal goal is 70 before he retires. We get some clips of the event and then fade out for another year. See you in 2014! I’m full. 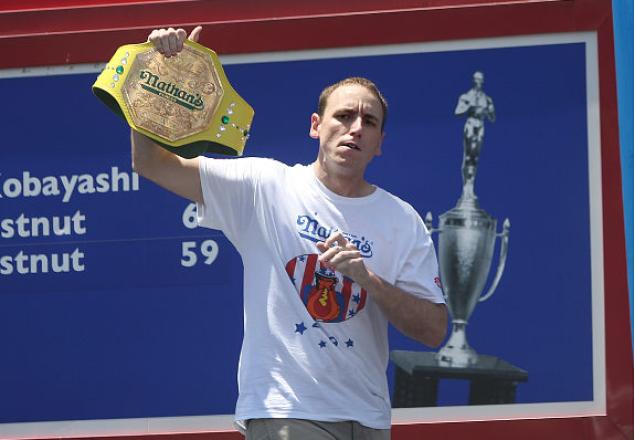