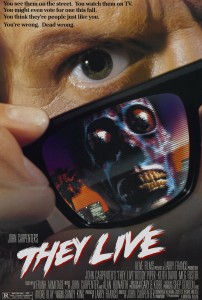 Plot: A drifter discovers a pair of sunglasses that allow him to wake up to the fact that aliens have taken over the Earth.

Review: I have come here to chew bubble gum and kick ass…..and I’m all out of bubble gum.

In the early 1990’s, just before cable TV became affordable for the masses and regular TV  was still prominent in many people’s homes, the local channels in my area would air three movies on Saturday and Sunday afternoons. Typically, you’d spend your weekend inside if it was raining, snowing, or no one was outside playing. It was during these years that I discovered a great number of films, and because these stations were locally owned and operated, I’d see the same films week after week. One of those films, was They Live.

Released in 1988, They Live tells the story of John Nada (Roddy Piper), a drifter who walks his way into Los Angeles, befriends fellow construction worker Frank Armitage (Keith David), and ends up at a local shantytown/soup kitchen to stay. Nada starts to notice strange activity around the local church that helps run the soup kitchen, and after investigating the church he finds a hidden stash of Rayban sunglasses.

Nada discovers the sunglasses are special. After putting on a pair, he sees the world in black and white and discovers it is not what it seems. Media and advertising hide constant subliminal totalitarian commands to obey and conform. Many in authority and wealthy are actually humanoid aliens with skull-like faces. After killing two alien police officers, Nada takes Holly Thompson, Cable 54 TV assistant director, hostage and hides out. Holly eventually escapes, and Nada goes back to get more sunglasses and find Frank. It’s here that we get possibly the best, and most realistic street fight on film between Frank and Nada. The two beat the shit out of each other before Nada gets Frank to try the glasses and see what’s going on around him.

The two team up and eventually meet the resistance, more people who know what’s going on and are arming themselves to fight the aliens. They learn that some humans that know don’t seem to care, and have taken bribes and gifts to allow aliens to take over. The aliens use a subliminal signal broadcast into people’s brains to camouflage themselves, and destroying its source will allow everyone on Earth to see their true form. Frank and Nada set out to, you guessed it, Cable 54, fighting their way through the alien forces before reaching the roof. The climax see Holly kill Frank, Nada kill Holly, and then he destroys the signal broadcaster (which is disguised as a satellite dish). Nada dies just moments after destroying the dish, with the aliens true identities being revealed to the entire world.

I love They Live, LOVE IT. Growing up I was (and still am) a wrestling fan, so to see Rowdy Roddy Piper kicking alien ass was (and still is) awesome. The story is fairly unique and original as well, with society being tricked into being slaves for the aliens, right under our own noses. Of course, as an adult I can see the social commentary that John Carpenter was pushing. It doesn’t take away from the film in my eyes though, but I can see why some people wouldn’t care for it.

The film, as with most Carpenter flicks, moves along at a good pace. Carpenter knows how to craft a film, with Halloween being outstanding and Christine being pretty good (it had its flaws). The action beats work nicely for the films story, giving us time to take in what’s happening and then building us up with some gun fights and explosions.

Of course, the five and a half-minute fight scene in the middle of the film is a classic. It’s rare that fight scenes go that long, and the scene itself plays out like a real fight. You don’t see these guys hitting round house kicks or throwing down one liners before throwing a punch. It’s gritty, dirty and downright hilarious at times. Keith David hung with Piper throughout the entire fight, and I don’t know anyone else that could have done that.

As much as I gush over the film, I do have some issues with it. The effects when Nada sees the spaceships, and when they’re underground and see some of the technology the aliens use doesn’t look very good. I bring this up because in all honesty, seeing that stuff wouldn’t have changed the story for me. I would have also liked to see Frank’s character more, he was just as interesting as Nada but just didn’t get enough screen time.

Acting: Roddy Piper did an outstanding job as Nada. If there ever was a strong argument that wrestlers can be actors, and good ones at that, They Live is it. Piper hits all the right notes, comes across as a badass with a sense of humor. I can’t imagine someone else playing the role.

Keith David is one of the most underrated character actors in history. He’s great as Frank Armitage, keeps up with Piper during their fist fight, and appears to be an all around badass. Keith David never became a leading man, but he’s done plenty of great character work along with voice overs for WWE features.

Meg Foster as Holly Thompson gets little screen time, even though she becomes incredibly important to the plot towards the end of the film. It would have been nice to see her more, as she was smoking hot back in the day.

Gore Factor: Not much red here believe it or not. The aliens look gross, but nothing gory or bloody.

Nudity Factor: The ladies get a shirtless Piper (who was still in great shape back then) and the guys get to see some boobage with an alien guy in the sack with a human woman.

Overall: They Live didn’t win any Oscars, but it’s got a great little story, good acting by Piper and David, and plenty of action to keep people going. I believe it’s quite the underrated little flick, and it gave us plenty of cool one liners as well. I can’t think of a better movie for a rainy Saturday afternoon.