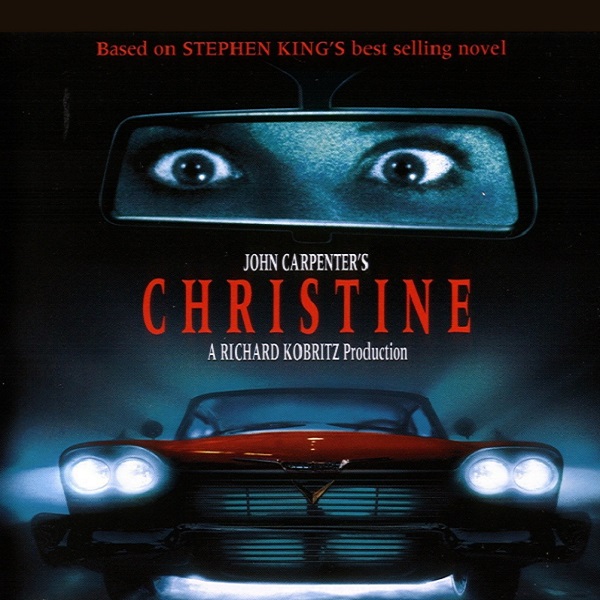 Plot: A nerdish boy buys a strange car with an evil mind of its own that will do anything to protect its new owner.

Review: We’ve arrived at another flick based on a Stephen King novel. Last time it was Misery, this time it’s Christine. I’ll take a moment right now to remind people, we’re reviewing the film, not the book, so whatever the book had that made it better is not taken into consideration here.

Christine is a fairly simple story. The film revolves around Arnie Cunningham, a nerdy high-schooler who buys an old beat up piece of shit 1958 Plymouth Fury and fixes it up. The car itself is alive, with a mind of its own, and kills random people who mess with it, and eventually kills its first owner and family. Arnie, of course, doesn’t know this at first and starts to change as the car kills more people around him. He pretty much falls in love with the car.

Christine targets those who want to break her up with Arnie, killing some teenagers who bullied Arnie around, and eventually targeting Arnie’s best friend Dennis as well as his would be girlfriend Leigh. The climax sees Dennis and Leigh take a bulldozer up against Christine with Arnie going completely off the deep end and getting himself killed. Christine ends up getting crushed into a small cube but yet… is still alive.

There’s plenty of good with Christine. The story is simply put without ever trying to explain how or why Christine has a mind of its own. I’m fine with that, as I really don’t think there’s a way to explain it without the story getting even more over the top than it is. Christine is alive, loves her owner, whoever that may be and protects that person to no end.

John Carpenter stepped out of his comfort zone by directing something that wasn’t his, as had been the case with  Halloween and Escape from New York. I think he did a great job here as all of the locations look good, the actors do just fine and there’s plenty of action to enjoy.

The soundtrack is straight out of the 50’s with plenty of rock classics that pretty much everyone enjoys. I like that this was the soundtrack used because it lines up perfectly with the car being a 1958 Fury. This only adds to the car’s character and the music itself becomes a way for Christine to stalk her prey. 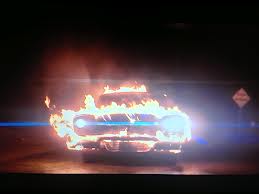 The effects of Christine putting herself back together are fantastic. Considering this was 1983, seeing a car put itself together with the smoothness it did was outstanding. Another scene that’s just badass is Christine, completely on fire, chasing down a victim. Carpenter and his crew did a great job with the effects.

I liked the ending with Arnie being far too gone to be saved and the bulldozer Vs. Christine fight. The finish with Christine being nothing more than a crushed cube and yet still alive was fun. It was a nice touch that all Carpenter movies tend to end with.

There are some bad things about the film however. The pacing in the middle tends to just drag even with Carpenter ignoring a lot of what was in the book. Trimming the story down for the big screen can be a tough task and you obviously don’t want to slow the story down, but that’s what happens here.

Arnie’s transformation from nerdy kid to badass happens too fast as well. One minute he’s wearing glasses and barely able to speak to his parents, the next minute he’s the man in black and choking his dad. It happened way too fast and while we didn’t get to see much of the transformation, we do get to see too much with the teens who bully Arnie and too much time spent with Dennis and his broken leg. 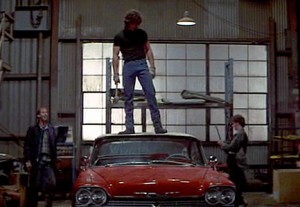 Then there’s Detective Junkins, played by Harry Dean Stanton, who sort of shows up questioning Arnie about the deaths of the teenagers who bullied him. The role is a small one and unfortunately, doesn’t get near enough screen time to make it even worth having in the film. We get just a little to make it interesting but then it’s gone and we’re still not seeing Arnie’s transformation while stuck in a hospital bed with Dennis. They should have cut the detective character out completely as it’s useless in the grand scheme of things.

Acting: Keith Gordon does a fine job as Arnie the nerd in addition to Arnie the man in black. Like I said, I wish we could have seen more transformation, but Gordon pulled off both roles just fine.

John Stockwell as Dennis did the best he could. I wish we could have gotten more from him then just sitting around with a broken leg and crying, but what can you do?

Alexandra Paul was cute as Arnie’s love interest. She had plenty to do being scarred and was good at it.

Harry Dean Stanton, a great, great actor, was terrific as Detective Junkins even though he’s had too little screen time. They should have given him more to do or cut him completely. 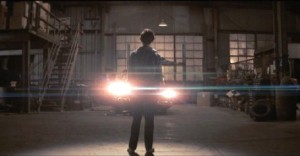 Gore Factor: We get a little red with Arnie being impaled by some glass, a guy getting run over, another one is crushed to death. Carpenter held back on the blood in this one and that’s okay.

Nudity Factor: We get to see under Christine’s hood…

Overall: Christine probably won’t creep anyone out and it’s not terribly scary but it is a good flick. While the middle drags a bit, it’s fun seeing Christine do her work at the beginning and the end. Carpenter and company did a fine job with the film and I suggest checking it out.