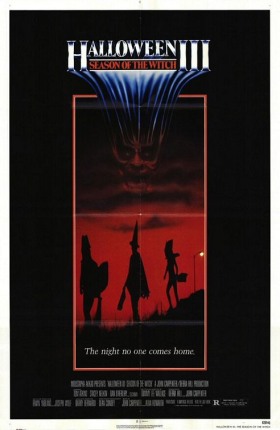 Plot: An apparent murder-suicide in a hospital emergency room leads to an investigation by the on-call doctor, which reveals a plot by an insane toymaker to kill as many people as possible during Halloween.

Review: The night no one comes home….

If you opened today’s House of Horror expecting me to bash Halloween III to pieces, you’re about to be let down. I’m not one of those who hates on the film for its biggest flaw of not having anything to do with Michael Myers. When I was a kid, yes I hated the film, but as I grew up I came to realize Halloween III, even with its faults, is a damn fine film.

Halloween III centers around Dr. Dan Challis (Tom Atkins), who investigates a murder-suicide after a patient is killed in his hospital with the suspect then killing himself. He teams with Ellie (Stacey Nelkin), whose father worked for the company that produces the Halloween masks found on the assassin from the beginning of the film.

Challis and Ellie make their way to visit the Halloween mask maker Conal Cochran, and his company Silver Shamrock. The small town of Santa Mira is home of Silver Shamrock masks, the worlds largest supplier of Halloween masks. In fact, the company is so big, they’re having a big giveaway on Halloween night and we’re reminded of this throughout the course of the film.

The Silver Shamrock trademark on the masks contains a computer chip encompassing a fragment of Stonehenge. When the Silver Shamrock TV special airs on Halloween night, the chip will activate, killing the wearer of the mask while unleashing a lethal swarm of insects and snakes, killing those around the wearer. Challis is able to escape from Cochran and get some of the TV stations to not run the commercial, but cannot stop them all.

Okay I get it. Fans wanted more Michael Myers and their hatred of this film is completely understandable. When I was a kid, I thought the film was stupid and wanted more Michael Myers. Looking back though, with the ending of Halloween 2, there’s no way Michael could have just come back. Even when he does in Halloween 4, it’s hard to believe he survived being blown to smithereens two movies ago.

Get over that Michael Myers is not in this film and you’ll be able to enjoy it the same way I do. Don’t get me wrong. The movie isn’t perfect, but it’s nowhere near as bad as people have made it out to be. We get a pretty good story here with a madman using Stonehenge – which itself has always been shrouded in mystery as to why it was built – and it’s powers to kill people through the TV sets in their homes. This is of course a social commentary on what we bring into our homes and put our trust in. Everyone has a TV set meaning no one in the story’s world was going to be safe.

Tommy Wallace, who worked on both Halloween and Halloween 2, does a great job as director. The movie keeps up a good pace and before you know it, we’re at the finale. There’s very little lag and we get just enough information as we move along to keep us interested without giving everything away.

The issues the film has is the horrible music, my god! I know people who enjoy it and I just can’t figure out why. It’s all synthesizer music and just grates on your nerves. The commercial for the big giveaway uses London Bridge as a melody and that’s fine as it’s supposed to be catchy. The rest of the music is just terrible.

Another issue I have is the way the film ends. Not the ending of the film, but the way it ends. We really don’t get to see any results from Cochran’s plan, which he was able to pull off to some degree. Sure we get an example of what’s going to happen, but I’d like to see just how many people were actually affected by his plan.

Acting: I’ve talked about the great Tom Atkins before in my review for Night of the Creeps. While he’s not kicking ass so much here, he’s still great on the screen as our hero. Here’s to you Tom!

Stacey Nelkin is just going through the paces as Ellie Grimbridge. She didn’t make me give a damn about her at all and that’s a shame.

Gore Factor: We get some pretty good stuff here: a double eye gouge, mouth blown off, head pulled off body, robot guts, a boy’s head turns into bugs and snakes … it’s all neat.

Nudity Factor:  Stacey shows off her goods … maybe I should give her performance a pass.

Overall: Hate on the film for not having Michael Myers in it all you want, but you’re missing a good creepy pod movie with good acting and fun kills. Yes, they should have called the film something besides Halloween III, but John Carpenter and Debra Hill were all for this direction for the franchise, so what can you do? Of course Michael Myers would return for the next installment in the franchise, which we’ll get to at some point.