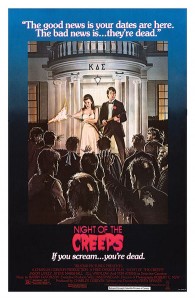 Plot: In 1959, an alien experiment crashes to earth and infects a local fraternity member. The Government then freezes the body and stores it. Twenty years later, two geeks pledging a fraternity accidentally thaw the corpse, which proceeds to infect the campus with parasites that transform their hosts into zombies. Their only hope is a guilt-stricken detective and a flamethrower.

Review: What is this, a homicide or a bad B-movie?

Night of the Creeps is easily one of my favorite horror movies, in fact I’d put it in my top ten list of horror films. The movie mixes aliens with zombies and throws in a dash of Tom Atkins, and who doesn’t want a little Tom Atkins in their movies?

Not to go through the entire movie’s plot here (which is something I’m going to try and not do from this point forward), there’s plenty to see and dig here. The story centers on these slug-like creatures that jump into people’s mouths, taking over their brains and then controlling them. The creeps, as we’ll call them, are able to bring people back from the dead, basically making everyone that they come into contact with a zombie.

Chris Romero (Jason Lively) and J.C. Hooper (Steve Marshall) are the leads of the film, playing two college kids who try to pledge a fraternity by dumping a dead body on a set of nearby dorm steps. Of course all of this is Chris’s attempt to go out with the hot girl of the movie, Cynthia Cronenberg (Jill Whitlow). Instead of getting the prank done, they unknowingly unleash the creeps into the college population.

Meanwhile, Detective Ray Cameron (Tom Atkins) is investigating the body dumping and dealing with his own regrets of not being able to save his girlfriend twenty years prior from an ax wielding maniac, who is eventually brought back to life by the creeps. Thankfully, Cameron is able to track down the rejuvenated corpse and blast it to smithereens.

As the bodies hit the floor, then get back up, Cameron, Romero and Cronenberg (ha!) learn that the creeps can be killed by fire and set out to burn them all and stop them from spreading. They are eventually successful, with Cameron giving his life up to destroy the hive of creeps. That is, until one last creep shows up.

It’s easy to call this a B-movie because it’s supposed to be, but in all honesty everything moves at such a good pace and looks so good that you’ll forget you’re watching what’s supposed to be a B-movie. The writing is crisp and somewhat original, and there’s plenty of scares here (J.C. was glad to be on the toilet for his demise). The directing is spot on, and I found myself cheering for Detective Cameron as he demanded someone get his shotgun from the car, now!

Acting: Jason Lively as our “hero” did just an awful job here. You may remember Lively from National Lampoon’s European Vacation. Here he’s supposed to be that underdog type hero who finally gets the courage to get the girl and kill a bunch of zombies in the process, but ultimately he comes across as a whiny buffoon. I don’t believe it’s the writing for his character, but instead the way he played him and the way he was directed. By the time he mans up, it’s too late and the audience is left with Cameron as the hero of the film.

Tom Aktins did a hell of a job here. I’ve always enjoyed Tom Aktins; he kicked ass in Halloween 3: Season of the Witch and always brings it no matter how big or small the role he’s playing. Tom chews up the scenes every time he’s on the screen, and plays the character so straight-laced in the face of the absurd plot that you actually root for him more than Chris. Tom Atkins uses what little time the character has on screen to make you feel for his character and the guilt that he’s been plagued with for over twenty years. Well done Mr. Atkins, well done.

Jill Whitlow was my first on screen crush as a kid; she plays the girl next door so well with her soft speaking and finally becoming a bad-ass by the end of the film. It also helps that she’s downright gorgeous.

Gore Factor: Fair amount of gore here, from a split-open face (that resembles a woman’s….well you know), a cat with its face ripped off, fraternity guys missing legs and bleeding everywhere, and plenty of hacked-up prom dates.

Nudity Factor: There’s plenty of boobage for the guys, as Jill Whitlow gives us a quick but awesome show. Girls will be happy to see many six-packs running around, but the bad 80’s hair on both the guys and girls may turn most people away.

Overall: Night of the Creeps is one of those movies that not everyone has seen, but when they do they wonder why they didn’t see it sooner. Tom Aktins chews up the scenery and a plot that doesn’t take itself too seriously. You can’t go wrong spending a night with the creeps. If you haven’t seen this one, make sure you get to it!