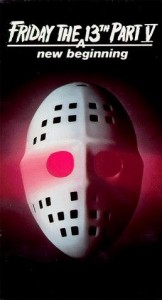 Plot: Still haunted by his gruesome past, Tommy Jarvis – the boy who killed Jason Voorhees – wonders if somehow he is connected to brutal slayings occurring in and around the secluded halfway house where he now lives.

Review: If the memory still haunts you…you’re not alone.

We start off meeting Tommy Jarvis, who we first met in the previous film as a kid played by Corey Feldman. Now Tommy is a teenager and headed to a halfway house out in the country. His mom and sister are dead (even though his sister survived the last film). Upon reaching the halfway house we meet the other troubled kids there. Joey is the fat one, who’s not only got an eating disorder but is slightly mentally challenged. Victor is the loose cannon who can’t control his temper, Violet just seems to like punk music (there’s no reason given why she’s here). There’s a few others, but it’s hard to tell why they’re at the house and it’s never explained. Whatever.

Not long after Tommy shows up, Victor hacks Joey to pieces with an ax (because why not give weapons to teenagers with issues) and is taken away by the cops. Tommy keeps hallucinating that Jason is there, seeing him in his room and outside. More of the teens wind up dead, dropping like flies every few minutes. The local Sherriff suspects it’s Jason Voorhees, but that’s refuted by the mayor who claims Jason was cremated (which would cause some confusion for the next film).

More and more bodies pile up until we’re down to Tommy, Reggie (a young boy who was at the house to visit his grandfather) and Pam who helps run the facility. The three of them face off with “Jason”, taking their hits before dropping him onto a piece of farm equipment that is basically a bed of spikes. It’s at this point we find out that “Jason” was Roy, an ambulance driver seen earlier in the film and also Joey’s dad. The film ends on a cliffhanger, with Tommy wearing the hockey mask and ready to kill Pam.

So let’s tackle the biggest complaint people have with the film: that Jason is not the killer. Okay, I get it, after three films you wanted Jason to be doing the killing. Let me stop you right there though, the first Friday the 13th film didn’t have Jason doing the killing. Jason’s mom, Mrs. Voorhees was doing all of the killing, because the camp counselors let Jason drown. Here, Roy loses his shit and starts killing because the people at the house let Joey get hacked to pieces. If anything, Friday the 13th A New Beginning is a remake of Friday the 13th. So yeah…put that in your hater pipe and smoke it.

The kills come swiftly here, every ten minutes or so there’s a death. This was a mandate handed down by the producers. This in turn meant that they needed more cannon fodder, so more characters were added. Too many if you ask me. This film has the highest body count in the series and it shows. Random extra characters are introduced and promptly killed off, like the greasers who have about seven minutes of screen time and then die, and they appear nowhere else in the film. The orderly and his date, also share about the same amount of time on-screen before eating it. I get they wanted to up the gore and have more bodies, but it really slows down the film and adds very little.

Danny Steinmann does a decent job as director considering he’d done little directing before this. Of course the characters are for the most part under developed, while Tommy, the lead of the film, fails to the same fate. I wish they had put more time into Tommy’s character, give us a reason to either suspect him as the killer or root for him to get over his problems and put an end to this killing spree. Neither is done, as you never suspect him nor are you relieved when he finally shows up at the end.

The setting is a bit off, as it’s a halfway house in the country with no rules. That seems to be an odd way of helping those that have problems. Again, it’s hard to tell why half of these kids are here, some are obvious, like Victor and Joey. I liked seeing Violet doing the robot before she gets killed, only because people forget how cool the robot was.

Really, A New Beginning is just more of the same, and that’s not really a bad thing if you liked the other films. It’s been twenty years, time to get over Jason not being the killer.

Acting: Melanie Kinnaman did a fine job as Pam. She really didn’t open up until the finale act, when she went from screaming to tough.

I liked Shavar Ross as Reggie, the little badass even hits “Jason” with a tractor before shoulder blocking him off the ledge of the barn.

John Shepard was fine as Tommy. I liked where they were going with Tommy, I just wish he had been developed more.

Gore Factor: Plenty to see here, even though a lot was cut. Clipped out eyes, hacked up arm, cleaver to the face (twice), one beheading, one machete through the back and a road flare to the mouth!

Nudity Factor: We get four boobs and Melanie Kinnaman running around in a wet white t-shirt for the final act of the film. Ladies get to feast their eyes on Jason’s bald head.

Overall: People have hated on A New Beginning for twenty plus years. Real fans of the series however realize the film is more of the same from the franchise, and enjoy it like any other film. I get the argument that it’s not really Jason doing the killing, but he didn’t do the killing in the first film either and it was just as good. A New Beginning isn’t great, and I wouldn’t put it in my top ten horror movies, but it’s still a solid offering and better than some of the later Friday the 13th films.