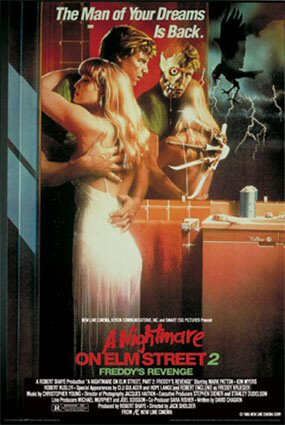 Plot: Five years have passed since Freddy Krueger was seemingly defeated. A new family, the Walsh’s, have moved into the former home of Nancy Thompson, and before long, the kids are again having nightmares about deceased child murderer Freddy Krueger. This time, Freddy attempts to possess a teenage boy to cause havoc in the real world, and can only be overcome if the boy’s sweetheart can master her fear.

Review: The Man of Your Dreams Is Back…..

It seems that when it comes to horror franchises, there’s always a “black sheep” in the collection. There’s always that one film that deviates from the established formula or takes the formula and turns it upside down, making a film that fans just don’t like. Sure, they enjoy the other films, but if they had to pick one they didn’t like, but would watch, it would be that one.

Friday the 13th of course has part five as it’s black sheep. Halloween has part three as it’s black sheep. A Nightmare on Elm Street wasted no time getting it’s oddball out of the way, as the second film in the franchise is easily the weirdest one in the bunch. That’s not to say it’s terrible, but it’s not what Freddy fans were expecting.

The story has Freddy possessing the body of Jessie, a teenager whose family moved into Freddy’s house. Freddy’s plan is to use Jessie to not only kill people, but to bring himself back into the real world. Jessie and his girlfriend are the only ones who realize what’s going on and try to stop Freddy from taking over Jessie’s body.

The concept is a bit strange considering Freddy has all the power he could ever want in the dream world. He’s unstoppable, considering he easily came back from what happened with Nancy in the previous film. Plus he can jump in and out of dreams and do as he pleases. Why would he want to come back to the real world?

We get some dream sequences, but they’re nothing like the first film and nothing like the rest of the films in the series. The dreams we get are odd, with Jessie visiting an S&M bar and almost having sex with his gym teacher, and no, his teacher isn’t a chick.

For some reason they do everything they can to hide Freddy’s face from the camera. In the first film there was a build to seeing his face, and we finally did, here they go out of their way to cover it up. It’s an odd choice, considering Freddy’s look helps sell the character.

The movie does have a lot, and I do mean a lot, of homosexual overtones. The writer of the film, David Chaskin, said he purposely put the gay overtones into the script, but apparently the director and actors had no clue about it for a long, long time. Does any of this take away from the film as a whole? Absolutely not. Due to the overtones however, many fans label it as being “gay”, which is something I’m not fond of. I don’t think the subtext should label this film, it’s a horror film first and foremost.

Jack Sholder does a passable job as director, but he didn’t exactly set the franchise on fire. The film is slow to start, but once you get to the last twenty or so minutes it picks up and gets good. Freddy not having much screen time I think takes away from the film, as people came to see Freddy, and with little screen time you lose a lot of the appeal of the film.

Acting: Mark Patton plays our hero Jesse, and he does a fine job. There’s nothing outstanding to his performance, but he doesn’t phone it in either.

Kim Myers is cute as hell as Jessie’s would be girlfriend, and thankfully she brings it in the final act. While her character can’t match up to Nancy from the first film, she’s still strong and hot, two things that this movie needed badly.

Robert Englund doesn’t get much to do as Freddy. He does chew up the scenery for the few minutes he’s around.

Gore Factor: There’s some of slicing here, and even a brain reveal, but there’s not a whole lot of red stuff. Normally I wouldn’t complain about a lack of gore but Freddy was pretty much built around it, so more was needed here.

Nudity Factor: If you like your gym teachers tied up and naked, this one’s for you.

Overall: A Nightmare on Elm Street 2 tried to do something different then the first film, but it just wasn’t the right direction. Of course you’re always faced with keeping things the same but bringing something new to the series, and it’s hard not to repeat what’s been done. I think if the film had more Freddy and more kills, it would have made up for the odd story decision of Freddy trying to get back into the real world. The film is very much watchable, and Freddy isn’t spouting off his dumb one liners yet, so the films got that going for it.