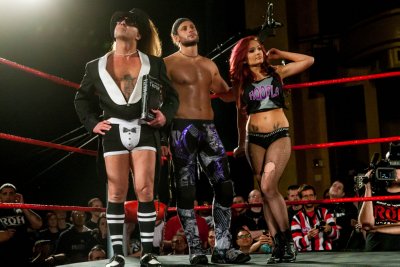 As you would expect, we open this week’s show with a recap of the closing moments of last week’s World Title match, including Adam Cole attacking Jay Briscoe after he was handed the strap. After the opening animation, we head inside the National Guard Armory in Philadelphia where Kevin Kelly welcomes us to the show and then sends us right to the ring for our first match.

KK tells us that Nigel McGuinness will be joining us in a bit. Page recently had a birthday, so this could be a very nice present the youngster. I still hate ACH’s theme. Things feel weird with the tournament over and everything back to normal now, but the crowd is still pretty hot to kick things off. ACH works Page over as KK again discusses the fallout from the Cole/Elgin match and his disappointment in the champ. Page starts to kick his way back in before cracking ACH with a kneelift and back suplex for a near fall. I have enjoyed Page since his debut, so glad to see him featured here on TV with the tournament done. KK says Nigel will have information about Cole’s next challengers. ACH lands an enziguri and flatliner for two but Page comes back with a nice standing moonsault. KK talks about ACH’s popularity and I guess it is hard to disagree when you consider the reactions he always seems to get. Page gets tossed outside and ACH follows with a crazy high somersault senton to wipe Adam out. Back inside, ACH comes off the top with a cross body but Page rolls through to steal the win! Fun sprint there with the perfect finish as ACH had all the momentum and the crowd rocking, but Page found a slight opening and picked up a big win. They shake hands as KK takes us to break.

After break, Nigel has now joined us in the ring to address the fans and locker room. He puts over the tournament and all the gutty competitors that fought through tough matches and injuries. He was proud to be part of ROH when Cole won the title, but when Cole assaulted Briscoe, he was embarrassed. He doesn’t care why Cole acted that way, but he does care about the prestige of the title. So, he has decided to sanction an eight man tag team main event with a two hour time limit for Glory by Honor in Chicago. The four reigning champions will team up to face the four top contenders and Nigel reveals that Michael Elgin will be one member of the All Star contenders team. We are then joined by Jay Briscoe, who slowly swaggers to the ring. KK thinks something is off with Briscoe, and that he is no longer the same guy. He wants to know how Nigel can have that match without the real champion, but Nigel says he is injured and can’t compete. Briscoe vows he will be healed soon and calls Cole a bitch for acting the way he did. He tells Nigel he will be cleared five days before Chicago, but Nigel tells him he has already booked the bout. Briscoe tells Nigel that he has already defeated Cole in a match with the title on the line, something Elgin hasn’t done. And that draws out Big Mike who has some tight jeans and cowboy boots on. Not your best look, bud. Elgin defends his performance and calls out Briscoe for not defending the title against Elgin while he was the top contender. He isn’t making excuses or living in the past, so he is just focused on the Chicago eight man match. Elgin gets a good dig in about watching out for himself and not having a brother to watch his back at all times. Elgin promises he will get his hands on Cole and he is sick of fighting for Nigel’s definition of honor instead of his own. He admits that Briscoe has claim to being the World champion, but he feels he does as well. They want to throw down, but the officials keep them spread apart as we hit commercial. That was a very good segment and it was nice to see Elgin get pissed off and show some attitude.

Mike Mondo hits the squared circle as we are back from break. Mondo is back in action following a lengthy injury and Nigel is back in the booth. My man Roddy is out next and this should be a pretty good showdown. This match was supposed to happen back at Border Wars in May before Mondo went down with injury. Things are pretty even early on as KK tells us how Mondo had turned to yoga and resistance instead of lifting for his training regiment. Sounds like a DDP Guy to me. Mondo starts to take over with some knee strikes and a big clothesline for a near fall. Nigel wishes Briscoe had told him about his target return date before he made the match, but he can’t be sure of an exact date anyway, because anything can be happen. Mondo really lays it in until Roddy turns him around and batters him in the corner. Roddy sits him up top and snaps him over with a superplex for a near fall. He follows with a discus punch, jumping knee and powerbomb for the win. As much as I enjoyed the tournament, I like this TV format just as much with quicker matches to help rebuild some of these guys. This was a much needed win for Roddy and the pacing was perfect throughout.

Roddy grabs the mic and discusses his love for ROH and all of the talent he has faced and accomplishments he has realized. Basic promo, but a good chance for Roddy to remind us about what he has done and what he wants to do.

After commercial, we head back to Manhattan Mayhem V in NYC when Homicide and Kingston made a statement by snapping the finger of RD Evans after faking a handshake. That was the official debut of Outlaw, Inc and we are supposed to hear from them tonight. Back in the arena, Veda Scott is with RD Evans and QT Marshall, now known as Marshall Law. She talks about the crimes committed by OI and ROH by allowing the breaking of RD’s finger. Looks like Veda has gone heel here now and is part of this group as RD’s legal counsel. RD wants to seek justice against Nigel and ROH in court and Veda has counseled RD to go after justice in the ring as well, which they look to do tonight.

KK calls RD a “cape wearing buffoon” which gets a snicker from me. The lights go out, the siren fires up and out comes Kingston in a clown mask. QT meets him in the aisle and they start to brawl as Homicide comes from the crowd and jumps RD in the ring. KK says that Prince Nana brought OI back in because they agreed to shake hands and dress appropriately backstage. Nigel says Nana vouched for them and he agreed to let them back on the roster. All four men are brawling in and out of the ring with OI just wrecking shit up. This definitely has a Gangstas Lite feel to it, which I am guessing is the point. Homicide hits a splash off the top to quickly finish off RD. Homicide wants to shake a frightened RD’s hand, but he proceeds to snap some more fingers instead. These guys are fucked up and I dig it.

Kingston grabs a mic and tells Nigel that they want to help him clean up ROH, starting with reDRagon. He calls the champs out and wants to fight “prison style”. Nigel informs us that they aren’t in the building, but OI grabs a chair and has a seat, refusing to leave. As they protest, we head to commercial.

When we return, OI is gone and we are ready for our main event. KK tells us that it took all the security and officials in the building to get them to leave.

Lethal is a former TV champ and he wants to take that gold back here tonight. KK puts over the character of Lethal and says he is a prime example of what a champion should be, unlike the dude that currently holds the gold. And that dude is out next, led down by Truth Martini and the Hoopla Hotties. Well, here is another opportunity for Taven to deliver a strong match with a talented opponent. Let’s see if he can get it done and not have to be completely led through the bout. Taven ducks to the floor off the bell, trying to frustrate Lethal a bit. Truth gets involved early on, hooking Lethal’s leg, so the referee tosses the whole crew out. KK thinks Lethal faked it to mess with Taven and it seems to have worked. Taven bails to the floor again, but Lethal meets him with a suicide dive. He follows with a second one on the other side of the ring. KK thinks Lethal is clearly the favorite now that Truth is gone. Taven is a mess and ends up back on the floor again, where Lethal cracks him with a third dive, which also takes us to break. When we return, Taven has gained control and drops Lethal with a hanging DDT for a near fall. Taven gets aggressive, slamming Lethal with right hands before grabbing a reverse chinlock. Lethal fights free but Taven catches him with a big dropkick for two. KK runs down next week’s card as Taven hits a delayed suplex. I am glad they tossed the Hoopla crew out because I have been wanting to see Taven give it a go without all the gimmicks involved.

Taven keeps kicking away at Lethal, yelling at him to stay down, but Lethal hulks up and fires away with right hands, but Taven cuts him off at the pass. That is short lived as they start trading blows in the center of the ring, with Taven eventually briefly gaining the advantage before eating a flying forearm and Lethal Combination. Taven floats out of a suplex and gets an O’Connor Roll for two. Lethal goes for the LI but Taven blocks with a enziguri for a near fall. This has been Taven’s best TV match in a while and the fans seem to agree. Lethal rolls through a sunset flip and cracks Taven with a superkick but he can’t put the champ away. Taven recovers in time to prevent a top rope elbow and instead go for a superplex, but Lethal fights that off and follows with a dropkick to the back. He pulls Taven off into a torture rack, but Taven hooks the rope, slips free and drops Lethal with the Climax for the win. That was a huge win for Taven and he certainly delivered a very good TV main event performance and looked great in defeating Lethal cleanly.

Truth and the Hotties come out to celebrate as Taven shakes Lethal’s hand. Truth talks about how Taven is a special wrestler because he has Hoopla running through his veins. He puts over the Hotties and their respective roles in the House of Truth.

I really enjoyed this week’s episode and it was nice to get back to a more routine TV format. Every match was enjoyable and they all furthered character development and helped get all the competitors over. It was also good to see a nice mix of personalities back in the mix as well. The march to Chicago continues next week and until then, take care and respect the code!