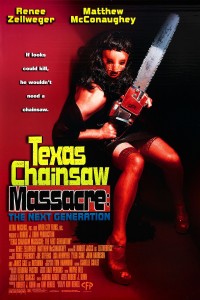 Plot: A group of teenagers get into a car crash in the Texas woods on prom night, then wander into an old farmhouse that is home to Leatherface and his insane family of  psychopaths.

Review: Oh how the mighty have fallen.

I love the first Texas Chainsaw Massacre. It’s a great example of how you can scare the hell out of someone without the use of blood or violence. Strong actors, a simple story and an effective setting is all you need. The sequels would bounce back and forth, the second focusing on black comedy with the third relying on gore to sell itself. The Next Generation avoids everything the first three films had and makes not one bit of sense along the way.

The opening crawl of the film tells us it’s been five years since The Texas Chainsaw Massacre 3 and the Sawyer family has gone quiet. The problem is TCM3 came out in 1990, and this film is set in 1996… so we already know the writer is up to no good here. There is no mention of the whereabouts of the Sawyer family or any of the other family members from the past three films.

The film centers around four teenagers on prom night with Jenny (Zellweger) being the lead of the film. The teenagers end up in the backwoods of Texas and after a car accident, the four of them split up with some being chased by Vilmer (McConaughey) and the others by Leatherface. Three of the four are killed, in a similar fashion to those from the original – meat hook hanging, hammer to the head, you get the idea.

Along the way we meet Vilmer – the new leader of the family – his crazy (but smoking hot) girlfriend Carla, Leatherface (of course) and Walter, who for some reason quotes famous military leaders throughout the film. Jenny is held overnight in the house being tortured mentally by the Slaughters, not Sawyer from earlier films. We do get a dinner scene, because it wouldn’t be a TCM film without one. That’s when things get… weird.

A guy named Rothman shows up during the dinner scene, in a suit and tie, and tells the family that they aren’t doing their “jobs” correctly. Before we can find more out, Jenny escapes. During the final chase scene, a biplane shows up and I’m not shitting you, kills Vilmer and lets Jenny get away. She gets into Rothman’s limo who then tells Jenny that her experience was supposed to be spiritual though it went awry and Vilmer had to be stopped. They drop her off at a hospital and THE END.

What the hell? I can’t even begin to explain this in a way that makes sense. I’ve seen this film countless times, more then I ever should have. Honestly, in the fifteen plus years the film has been out, I don’t understand anymore today then I did back in 1997 when I first saw the film. Even with the internet being available and more information coming out about the film, the plot still doesn’t make sense.

Right away, the film tries to be a remake of the first Chainsaw film, avoiding having blood and guts flowing. I’m fine with that. I’ve said it before and I’ll say it again, not all horror movies need gory scenes. However, the actors and the look and feel of the film just doesn’t work. There’s no impact when these characters die since it doesn’t work on the same level as the original Texas Chainsaw Massacre.

The whole idea of the Illuminati being behind the family is just… it wasn’t needed. The family was always out there doing their thing because they were cannibals and they were out to get food, plain and simple. This family doesn’t eat people, instead they eat pizza. Giving them an entirely different reason for killing was just senseless.

Kim Henkel, the director, was one of the writers of the first Chainsaw film. Why in the hell he thought this story was a good idea is beyond me. It really makes the entire plot even more confusing since he helped craft one of the greatest horror movies of our time.

Kim is a run of the mill director as well. He does nothing to make the film stand out from the others in the series. The story moves along at a decent pace, but there are spots where it comes to a halt and is just boring (the entire pizza ordering scene). It really makes the film harder to watch, as if it wasn’t bad enough.

One last thing, there was not a single chainsaw kill. The first film in the series only had one and that was fine. This film could have used one, at least one if not four. It’s hard to justify calling the film Texas Chainsaw Massacre when no one dies by chainsaw.

Acting: Renee Zellweger is fine as Jenny. She’s running, jumping, screaming with the rest of them. She’s still cute here and gets tough at the end but falls flat.

Matthew McConaughey to his credit puts in a great performance as Vilmer and is the only thing that’s good about this film.

Robert Jacks plays the worst Leatherface. He’s screaming like a woman through most of the film and never feels like a threat. He’s also not big in any sense as he’s an average dude and not scary at all.

Gore Factor: None. Even less gore then the first film and yet it doesn’t help this film at all.

Nudity Factor: We get a little side boob, the ladies get Matthew McConaughey’s chest.

Overall: Texas Chainsaw Massacre: The Next Generation is a piece of crap, plain and simple. The acting is horrible, the directing is by the numbers and the story makes no sense. McConaughey is the only bright spot in this crapfest. Avoid it unless you’re a glutton for punishment.