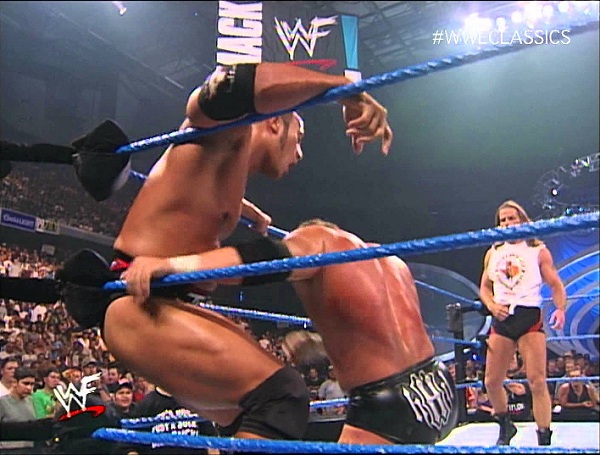 And back to the very first episode of Smackdown we go, although this isn’t the pilot episode where the Corporation merged with the Ministry and all that bullshit.  This would be three days after HHH won the WWF title for the first time and then never let it go.  This was the tail end of Vince Russo’s run, as he was beyond burned out and losing whatever shred of continuity and logic that he had.

The set is interesting, actually, as RAW was all angles and lines and this one is all ovals and curves.

HHH joins us to start, but he doesn’t do the water spit entrance yet.  When DID that start, anyway?  So, and here’s some irony for you, HHH is bitching about the office holding him back, but don’t worry, because he crammed it down all our throats anyway and won the title.  The Attitude belt remains awesome, by the way, and deserves a nostalgic return.  This was the start of HHH’s classic Neanderthal grunting interview style that everyone mocked him for online for years, by the way.  “I beat Stone Cold-uh, and Mankind-uh…”  So the Rock interrupts and challenges him to a title match TONIGHT.  HHH tells him to get lost, but Rock wasn’t done speaking.  Rock is just in his glory here running through the catchphrases and controlling the crowd effortlessly.  So this brings out Commissioner HB-Shizzle to make the match official…with himself as the referee to ensure fairness.  This brings out Shane-O-Mac to appoint himself second referee, but Shawn points out that he just had a “four star match” at Summerslam and so he’s a wrestler now, which allows Shawn to book him against Mankind instead.  And so we get a giant brawl as Rock destroys the Mean Street Posse and HHH escapes.  Convoluted booking and multiple levels of authority figures aside, this was a fun start.

Gunn quickly gets a powerslam for two, but Debra uses her boobs to distract him, allowing Jarrett to get an armbar takedown.  They head to the floor and Gunn gets run into the post.  Back in, now Chyna heads out, having switched from heel to babyface in ONE SEGMENT.  Jarrett is distracted and gets rolled up for the pin at 3:00.  So there you go, distraction finishes weren’t unique to today’s product.  And then Chyna turns on Gunn as well, because Vince Russo.  *

Meanwhile, Al Snow is distraught over the treatment of his beloved dog Pepper by Big Bossman.

Undertaker does commentary instead of wrestling, because he’s showing tough love to Big Show.  It’s quickly a three-way brawl and Show gets dumped.  Undertaker notes that this is leading to a big plan and he’ll reveal it when the time is right.  Of course, it went nowhere and Undertaker disappeared for months before returning as a biker in 2000.  Show fights off the Acolytes with chokeslams, but Kane saves and slugs it out with Show.  The Acolytes beat on Kane, and Show finishes X-Pac with the chokeslam at 3:38.  Rushed junk.  ½*

Big Bossman joins us to threaten TERRIBLE THINGS for Snow’s dog if he doesn’t get the Hardcore title RIGHT NOW.

As promised, Bossman brings the vicious Chihuahua out (with a muzzle on it) for safekeeping at the announce table.  Bossman as the world’s most cartoonishly evil heel is kind of funny in a way.  Bossman slugs a distracted Snow out of the ring, but Al comes back with the standard cookie sheet and ladder.  Snow goes to check on the dog, but Bossman nails him with the nightstick to win the title at 2:25 and then kidnaps the dog again.  DUD  Things would not end well for that poor mutt.

As noted several times tonight, this is the in-ring debut for Jericho.  Road Dogg trying to do the NAO routine solo is just so very sad.  Also, he wants to make Jericho into his prison bitch or something.  Dogg dumps him with a clothesline, but gets sent into the stairs.  Back in, Finkel sprays Dogg with whatever horrifying radioactive-yellow energy drink they were shilling that week and Jericho takes over with a backbreaker.  He grabs a table for some reason, but Dogg makes the comeback with the shaky leg kneedrop for two.  Jericho powerbombs him through the table for the DQ at 4:30.  JR posits that we’ll never forget Jericho’s Smackdown debut.  I have literally already forgotten about it.  *

Meanwhile, Jericho sics Finkel on Tony Chimmel, complete with Ultimate Warrior’s music.  So we get a ring announcer brawl, which sadly is only the second-most embarrassing thing on this terrible show thus far.

No match, as Shamrock brawls with Chris Jericho in another angle that went nowhere.  But then Shamrock v. Jericho would have been the trainwreck to end all trainwrecks at this point in Jericho’s career, so maybe it’s for the best.  Instead, Stephanie McMahon comes out to answer Test’s marriage proposal.  She says yes, although Vince Russo didn’t actually know where the storyline was going and they had to basically rewrite the whole thing when he left.  Shane and the Posse come out to break up the happy couple, but Mankind saves with a chair and wants the match with Shane right now.  Jesus, SLOW THE FUCK DOWN.  I’m watching this show and I feel like I need 5 seconds to digest something that happens, and instead I’m constantly bombarded with stuff.

So I guess this is the match?  They brawl around ringside with no ref and the Posse ends up fighting with the Stooges.  In the ring, Mankind quickly dispatches Shane with Mr. Socko, but now Chyna distracts him and HHH puts Mick down with a chair, as Shane triumphs.  What the fuck kind of drugs were everyone doing at this point?  Chyna has now turned three times in the same show.  DUD

Meanwhile, Ken Shamrock threatens to kill Finkel, who craps his pants in fear.  Also, Tori may be naked for some reason.  More updates as they come.

Tori wants to be naked, but Tony Garea forces her to wear a shirt.  Tori quickly attacks and starts ripping the dress off, winning at 0:50.  Yeah, OK.  Tori disappeared from the sport in 2001 and apparently teaches yoga now.  No big loss.

Oh god the tiny shorts!  I had blocked Shawn’s referee attire out of my mind and now I can’t unsee it again!  They quickly trade finisher attempts and HHH gets a clothesline and chokes away in the corner.  Rock tosses him and they fight up to the entrance for a Rock suplex on the stage.  Back to the ring, they slug it out and Rock dumps him again.  This is what people meant by “main event style” back then, as guys would fill time in the match by brawling out of the ring with no rhyme or reason.  Chyna gets involved and Shawn sends her away, which distracts him long enough to miss Rock DDTing HHH.  But now Shane joins us at ringside as they keep adding more and more STUFF to the match.  HHH takes over with a suplex and kneedrop for two.  Rock fights out of a chinlock and puts HHH down with a stungun, but now Shawn is distracted with Shane.  Rock takes out Shane, hits Rock Bottom, but walks into a superkick from Shawn to allow HHH to retain with KICK WHAM PEDIGREE at 9:40.  **  What a car wreck.  And then Shawn’s heel turn was never mentioned again or followed up on.

You can tell Russo was approaching critical mass because this show was STUFFED with his worst instincts all fired at the screen one after another with no time to breathe in between segments.  Not to mention the numerous angles and storylines started that ended up never paying off in any meaningful way.  Thankfully once he left things slowed down a lot and started moving at a more natural pace again, but this was pretty awful.