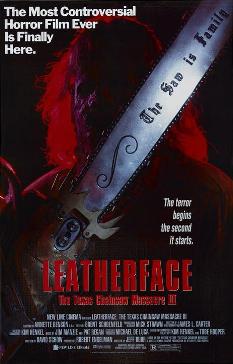 Plot: A couple driving through Texas run afoul of the cannibal family, with Leatherface leading the way.

Review: The Saw is Family.

If you remember my review of Texas Chainsaw Massacre 2, you remember that I wasn’t impressed with the direction the series had taken. While I enjoyed the performance of Dennis Hopper and the idea behind the character of Lefty Enright, the majority of the movie was played for laughs and unfortunately lost the scary touch of the first film. Apparently producers realized this mistake and for the third film kept everything super serious, so here we are with Leatherface: The Texas Chainsaw Massacre 3.

The opening crawl reveals what happened to the survivor of the first film, Sally Hardesty, and what happened to the family that was arrested, with one member being charged, convicted and executed for the crimes of Leatherface and company. This film picks up a number of years after part two, with some considering the film a reboot. I consider it a sequel, since it’s just Leatherface with a new part of the family, and contains some continuity from the first two films.

Michael and Ryan are ex-boyfriend/girlfriend, driving from California to Florida to drop off a car for Michelle’s father. Apparently a trip across the country is supposed to get the two back together, but whatever. The two of them eventually find the Last Chance Gas station, from the first film, and end up meeting some of the crazy local folk. As they continue on, they meet the Sawyer family, Tex, Tink, Leatherface, Alfredo and more.

The wildcard here is the character Benny, played by the great Ken Foree, who is a special forces nut that trains each weekend with weapons and whatnot. The couple meet him and eventually Michelle and Benny work their way through the night, escaping from Leatherface and riding off into the sunrise. I make it sound much easier than it actually was for them, trust me.

I love that the filmmakers went the serious route with this one. Sure, there are some funny moments in it, but believe it or not, none of the film has slapstick moments like Texas Chainsaw Massacre 2. Leatherface is back, big and brooding unlike in the last film, and this time he’s carving his way around the screen.

The family is expanded here, and this is where the confusion comes into play with viewers on the film being a reboot or a sequel. Since the family is new, with only Leatherface being the returning character from past films, it’s easy to say this film is a reboot. However, there’s plenty of references to the past films that link this one to the last two. For instance, the line “The Saw is Family” that’s engraved onto Leatherface’s chainsaw in this film, is a quote from Drayton Sawyer. Also, the Grandpa character is back, this time as a decayed corpse, but he’s here.

Texas Chainsaw Massacre 3 had to deal with the MPAA, who took their own chainsaw to the film. The film was notoriously cut, as a battle between New Line Cinema, which had produced the film, and the MPAA heated up. Originally the film had an X rating due to its graphic violence, and gained quite a bit of notoriety before it was released. What the audience got was a trimmed down version of the film. The cut footage eventually made it to DVD in 2003 for all you gore hounds out there. Of course thanks to movies like Hostel and Saw, all of this cut footage is really tame.

However I don’t think added gore would have helped the film any. The first Texas Chainsaw flick relied on people imagining what had happened and what was going to happen. Hell, some people still claim the first film was gory and yet it had none. Here, the kills are swift and quick, and leave the aftermath up to your imagination, and I think it helps the film.

Jeff Burr did a great job with the film, even with all the cuts the film would eventually get. The mood is scary and frightening, a swift change from the last film, and there’s some great music cues in this one.  One issue I have with the movie is the ending. There are two endings, with the alternate ending being the better of the two, albeit ending the movie on a down note.

Another issue I have with the film is the family it just too large, and there’s no back-story to how these guys came together. There’s three guys, a mom character, a little sadistic girl (which creeps me out something fierce) and Leatherface. That’s too many characters, and besides Tex none of them really get a chance to shine on the screen.

Acting: Kate Hodge is an attractive chick and strong enough in her lead here. The scene with her nailed to the chair makes me squirm each time I see it.

Ken Foree is great, always does a great job no matter what the role is. I like him as Benny, and apparently the test audiences did as well, as the love for his character got the ending changed completely.

R.A. Mihailoff plays a great Leatherface. His presence on the screen is imposing and the way it should be.

Gore Factor: A crushed armadillo, a shot off ear, shot off fingers and bullet wounds, sledgehammer to the head, hands nailed to a chair, and mass grave examinations…ewwwww.

Nudity Factor: Nothing here to see, move along.

Overall: Leatherface: Texas Chainsaw Massacre 3 is a good gross-out horror flick, with enough gore and violence to keep everyone interested and squirming. It’s a step up from the last film in the series, but unfortunately the future of the franchise wouldn’t get any brighter after this. Check it.