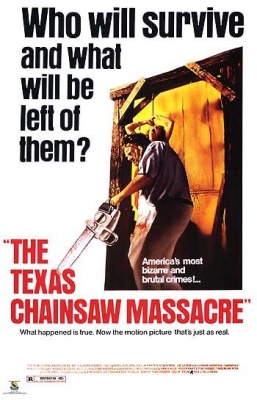 Plot: Five teens take a trip through Texas to check on their grandfather’s grave during a rash of ritualistic grave desecrations. They eventually go to the old family farm house and wind up on the bad side of a group of cannibals.

Review: This is the scariest movie I’ve ever seen in my life.

The story centers around Sally and her brother Franklin. The two of them, along with three other friends take a trip across Texas to visit the grave of Sally and Franklin’s grandfather. The local commentaries in the area have been desecrated by vandals, who dig up bodies and pose them on tombstones like artwork. After Sally and Franklin confirm their grandfather is still safe in the ground, they decide to take a trip out to his old house that they’ve not visited since they were kids.

Once the kids reach the old house, the bodies start dropping. The first to get killed are Kirk and Pam, who meet Leatherface, the chainsaw wielding star of the movie. Jerry eventually ends up dead next, before Sally and Franklin are attacked. Franklin ends up on the wrong end of the chainsaw, and Sally spends the night with Leatherface, his two brothers, and their grandpa. The climax sees Sally barely able to escape, with the hitchhiker getting run over and Leatherface not able to catch up to his prey.

What can be said about The Texas Chainsaw Massacre that hasn’t already been said? I realize I glossed over the plot, like the hitchhiker and the fact that the family are cannibals, but really that’s up to you to see for yourself. The film, even today, is the scariest movie I’ve ever seen. I wanted to start my “review” off with that line because it’s me being one hundred percent honest. I’ve seen a lot of horror movies, I grew up in the 80’s when Jason, Freddy and Michael Meyers were at their peak and it wasn’t unusual to dress up as one of them for Halloween. I’ve always been a fan of horror movies, but none of them scare me in the way Texas Chainsaw Massacre does. Even now, at the ripe age of thirty, I still get the creeps watching the movie by myself. 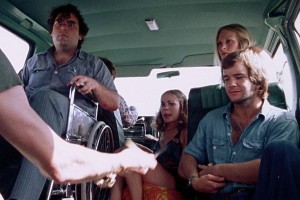 TCM had the luck of coming out in the early 70’s. There’s so much that works for the movie because of the time frame when it came out, like the hitchhiker early in the film. Today, no one picks up random people walking down the highway. In the 70’s, it was almost routine, so the kids finding the hitchhiker and getting attacked by him first gives you a little glimpse of what’s to come. The film is also helped that a lot of modern technology wasn’t available to these kids. You watch this knowing there’s no way for them to get help, and no one is coming to save them. That is what makes the movie so damn scary to me; it’s hopeless.

The movie is supposedly based on a true story, and should you find yourself visiting a number of horror movie message boards, you’ll still find people to this day that argue it’s based on a true story. The truth is, it’s not. The writer/director, Tobe Hooper, based some of the character of Leatherface on real life serial killer Ed Gein, who liked to dress up in the flesh of his victims. That’s it. This is yet another case of the movie coming out at the right time, because people bought that it was a true story and passed it along for years. With no internet to prove it’s not real, people just bought it. The tagline of the movie should have clued people in: “What happened is true, now the motion picture that’s just as real.”

There’s no music here at all. Sometimes you hear a cymbal going off, but the sounds are mostly grunts and groans, or the sounds of the inside of a slaughterhouse (seriously). The movie not having music adds to that whole “this is real” feeling that ended up surrounding the movie for the next forty years.

The directing of the movie is top notch. It moves along nicely in the early going, bringing you into these characters and finding out who are, before dropping the bomb of what they’re walking into. The pacing then slows down to allow the viewers to be tortured alongside those onscreen. The setting also backs up the whole feeling of hopelessness, as there’s nothing outside the crazy family house besides darkness. 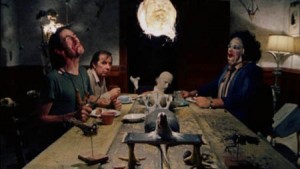 Gore Factor: Barely any. This is where so many people get confused about the movie. Even those that have seen the movie will claim it to be gory, but it’s not. There’s one death by chainsaw, and even then you barely see a small bit of blood fly across the screen (and that’s if you’ve got the DVD, as it’s almost invisible on VHS). The rest of the deaths in the movie are completely bloodless, even when the Hitchhiker gets run over. All of the gore is implied, which adds to the movies effectiveness to scare you. For all bones and furniture made of skin, you don’t ever see people actually getting cut up. Leatherface cutting his own leg is the majority of the gore in the film, and even that is barely shown on screen.

Acting:  The acting here is top notch, from everyone. Sally is played perfectly by Marilyn Burns. She’s not strong, she’s weak and frail and you honestly feel like she’s not going to survive the ordeal. When she’s the last left alive it’s almost like they’re picking on the weakest of the bunch. Gunnar Hansen did an outstanding job as Leatherface. It’s hard for an actor to portray a character when they’re wearing a mask and unable to speak, but his movements and presence on screen was perfect. He’s one scary mofo! Edwin Neal played a great psycho hitchhiker, and Jim Siedow anchored the group as the old man who easily snapped into a nut job at a moment’s notice.

Nudity Factor: None. There’s no place for it here.

Overall: All in all, The Texas Chainsaw Massacre gave me a fear of going to Texas and chainsaws, which I still can’t stand to hear starting up to this day. The film would end up being censored and banned by many countries, which only made rabid horror fans want to see it more. The Texas Chainsaw Massacre came along at just the right time, after all the monster movies and before the slasher genre. From the acting, to the directing, this is what I would call a perfect horror movie.