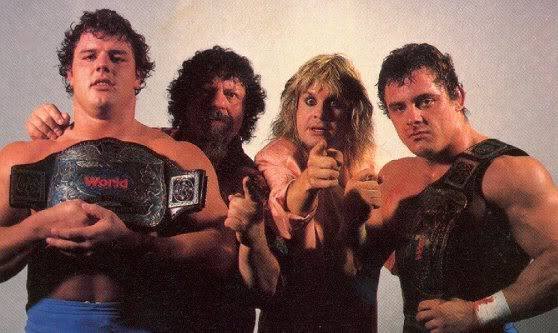 As a lover of tag team wrestling, this project is simultaneously a lot of fun, and a little frustrating. Most fans who’ve watched promotions other than WWE would likely agree that the E can’t lay claim to being the best company to showcase tag teams. Many of the all-time greats never appeared in the WWE, or had short cameos that pale in comparison to their work elsewhere. That doesn’t bother me, but the deeper I dig into the teams for this project the more “woulda, shoulda, coulda” teams I find that had considerable talents squandered through apathy, lack of quality opponents or a number of other factors beyond their control. The company’s been around so long, they have some great quality, just by sheer quantity, but it is frustrating there could be so much more.

Speaking of so much more, the WWE raided their super-secret footage vault and uncovered a Mongols match vs. Victor Rivera and Tony Marino, with the Mongols winning the International Tag Titles. The match can be found in the Nikolai Volkoff collection and is a significant historical find, so if that’s your thing you should be excited. It also gives you an example of a Mongols match, as they were discussed in this previous article. If you’re looking for an exciting, fast-paced match, you may want to stick to some of the matches recommended for other teams in this article. The Mongols match had the trademark methodical pace of the early 1970s with a lot of, uh, “limb work” and the last fall is decided by a standing elbow drop, in the high-spot of the match. But it is available to check out and gives you a sense of the wrestling style of the day and the Mongols work specifically.

We’ve got some real heavy-hitters in this edition, so let’s get to it. If you want to check out past articles, look here and if you’d like to join the discussion, you can join the Facebook group. 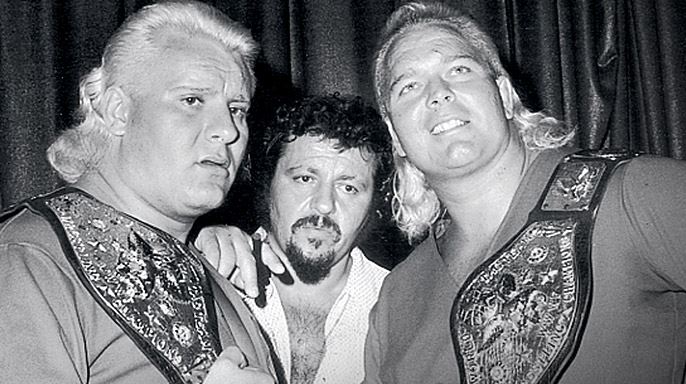 Thoughts: Glory be! Finally, a team from the 1970s that’s good in the ring. (Disclaimer: I have more teams to look into, this is just the first one from this era whose matches I’ve enjoyed thus far.) There’s a fair amount of 1979 All-Star Wrestling episodes featuring the Valiants available on the Network, generally featuring Gentleman Jerry and Luscious Johnny or all three Valiants in six-man action. I know a lot of fans prefer the original Jimmy and Johnny version, and I suspect Jimmy brings great character work earlier and the Jimmy and Johnny version were great stooges, as well. The workrate of the Jerry and Johnny team is generally miles ahead of other tag team matches of the 1970s, from what I’ve seen. By 1979, they did have the benefit of some really great fired-up babyfaces, like Ted DiBiase and Tito Santana, but the Valiants played the perfect foils. The Valiants had two lengthy title reigns, adding up to over 600 days combined. Their longevity is impressive with just under 300 matches with the company (I’m estimating a little, as six-man matches show up in both the Johnny-Jerry and Johnny-Jimmy combination so you have to count them and subtract from the total and math’s not my forte. If the exact number is important for your list, you should probably do your own math.) The episodes of ASW I’ve seen portray the Valiants as near a main-event level (they closed many of the TV shows.) They also presented a charismatic act, cutting crazy promos with Jimmy, Johnny and Capt. Lou Albano all cutting promos at various times. Their character and promo work certainly earn more points in their favor.

Placement Range: The Valiants check all the boxes, with lengthy title reigns, star-power and better matches than their contemporaries. The lack of great matches, despite being one of the first teams in the WWWF to have good matches, probably limits their upside a bit. They could crack my top 20, and likely will at least be in the 30s on my list.

Thoughts:  I remember the Bulldogs as a ground-breaking tag team that was completely different than anything we’d seen at the time. Their offense was very innovative, which played well, particularly to a young fan in the 1980s. Taking a closer look, I keep looking for the classic match that cements their legacy as an all-time great team…and I still haven’t really found those matches. Don’t get me wrong, I think the SNME and WrestleMania 2 matches with the Dream Team are very, very good. Many feel the Bulldog-Hart Foundation matches are all-time great matches, and again, I think they’re quite good (especially the 1/18/86 Capitol Center match) but not quite the classics they’re made out to be. I think a clear line of demarcation can be found between early Bulldogs, in solid tights and later Bulldogs with the Union Jack on their ass. (I originally blamed Matilda for zapping all the magic, but I realized she was accompanying them much earlier than I thought.) Whether it was a bad-luck bulldog or Dynamite’s injuries, I found the Islanders feud and Demolition matches disappointing.

Placement Range:  I really like the Bulldogs, but I suspect a lot of voters will read this and think the opposite is true. The British Bulldogs will easily make my top 20, probably not far from the top 10. They have an awful lot of really good matches and over 500 matches with the company. They’re extremely well-known and were accompanied to the ring by Ozzy Osborne. I’ve also heard some say the Bulldogs are an easy top-five team, and I disagree with this, because I just don’t think the list of great matches is there. Still love them, and I think top 15-20 is high praise. 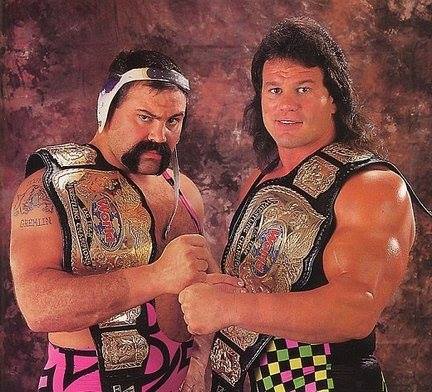 Thoughts: The Steiners may have the best case for a team with just a year-long run (though I want to look harder at the Brain Busters before making that call.) In just about a calendar year, they had an all-time great match with Bret and Owen Hart, and very good matches with the Headshrinkers at WrestleMania IX and SummerSlam against the Heavenly Bodies. They even had good matches with Money, Inc., with the best being the cage match linked in the FB comments. The title loss to the Quebecers on Raw in the Province of Quebec Rules is quite good. The Steiners drug the tag team division out of the dark doldrums of Money, Inc., the Nasty Boys and the Natural Disasters and they should be praised for it. They added prestige to the division and were perfectly at home rubbing elbows with main eventers, as they did at Survivor Series ’93. They delivered in every spot they were given during the year they were in WWF.

Placement Range: Lack of longevity and an epic title reign are all that hurt the Steiner Brothers. Despite being strongly associated with other companies, their year in WWF was really great. Nearly every match was good and they peaked with the Hart Brothers match, which could be the best WWF tag team match of the 1990s. I value match quality over longevity, so I’ll have them high, possibly in the top 20, though they could fall to maybe 30. For only a year in the company, that’s a pretty lofty spot on my list. 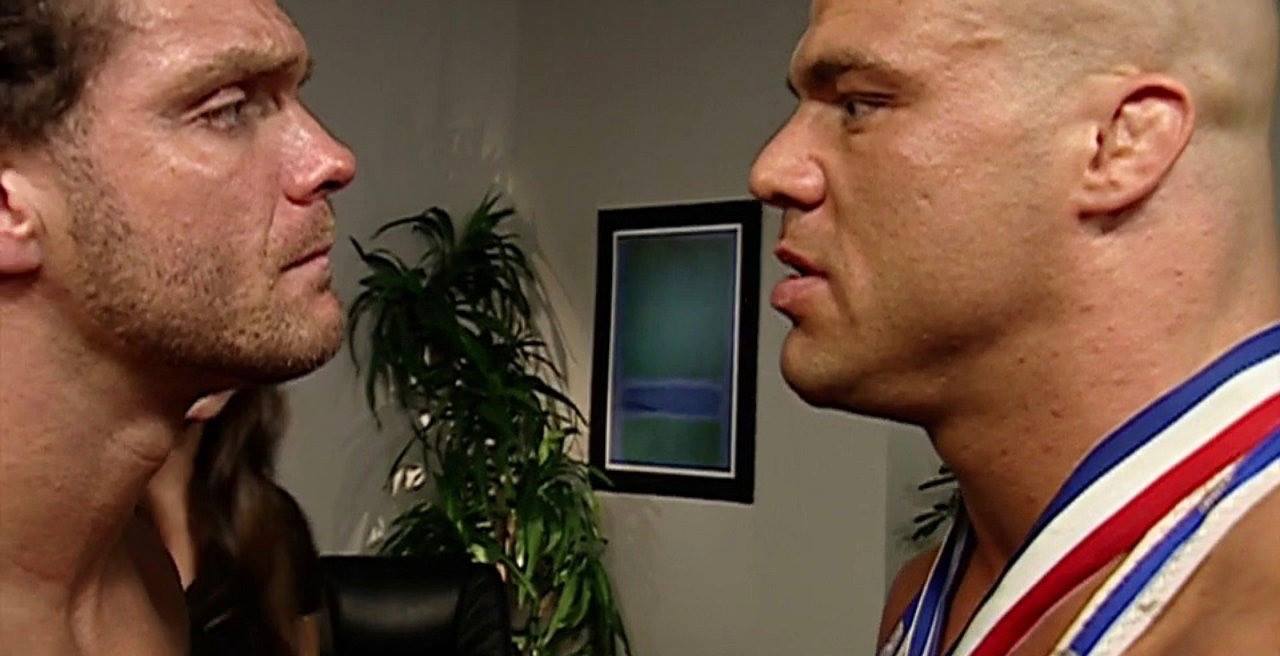 Thoughts: Angle and Benoit teamed together during the SmackDown Six era, simultaneously putting on fantastic matches and building their own singles feud (which would also be great.) Teams that also feuded were hardly unique, but few if any pulled it off better than Angle and Benoit. They were also the common denominator in most of the best of the SD Six tag matches, and that brief period of time featured some of the hottest tag matches in company history. The No Mercy tag title finals against Edge and Rey stands out as a top-five straight tag match in company history, and they had a lot of supplemental matches against Los Guerreros, Edge and Rey and other teams. They also tagged quite a few times both before and after the SD Six era, in mix-and-match main event tags, for whatever that’s worth.

Placement Range: They’ll be near the top of the short-term teams. The No Mercy tag has to carry a lot of weight for anyone who values elite level matches, so that will give them a boost on my list. Longevity will hurt them, as a fair amount of the 48 matches they have together are the mix-and-match main event variety, and I prefer dedicated and cohesive teams. Still, their top-tier work will carry them. They’ll be somewhere between 40 and 60 on my list, I expect. 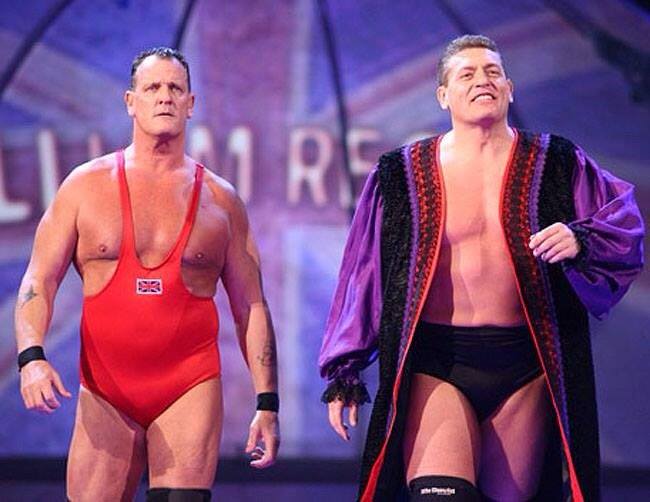 Thoughts: Regal and Taylor are a really good team with a few matches in WWE that are quite good. All of those matches involve London and Kendrick. Those two teams had great chemistry and could’ve had a memorable feud with more time and a few PPV matches, but unfortunately all we got was the four-way ladder match and several matches on SmackDown. The ones that didn’t have a bullshit DQ or count-out finish (or any involvement from Deuce and Domino) were good, but there’s just not enough on Regal and Taylor’s resume for serious consideration from me.

Placement Range: With just 45 matches and nearly all matches of significance with the same team, there’s just not enough for Regal and Taylor to make my list. The matches with London and Kendrick are enjoyable enough to check out, though. 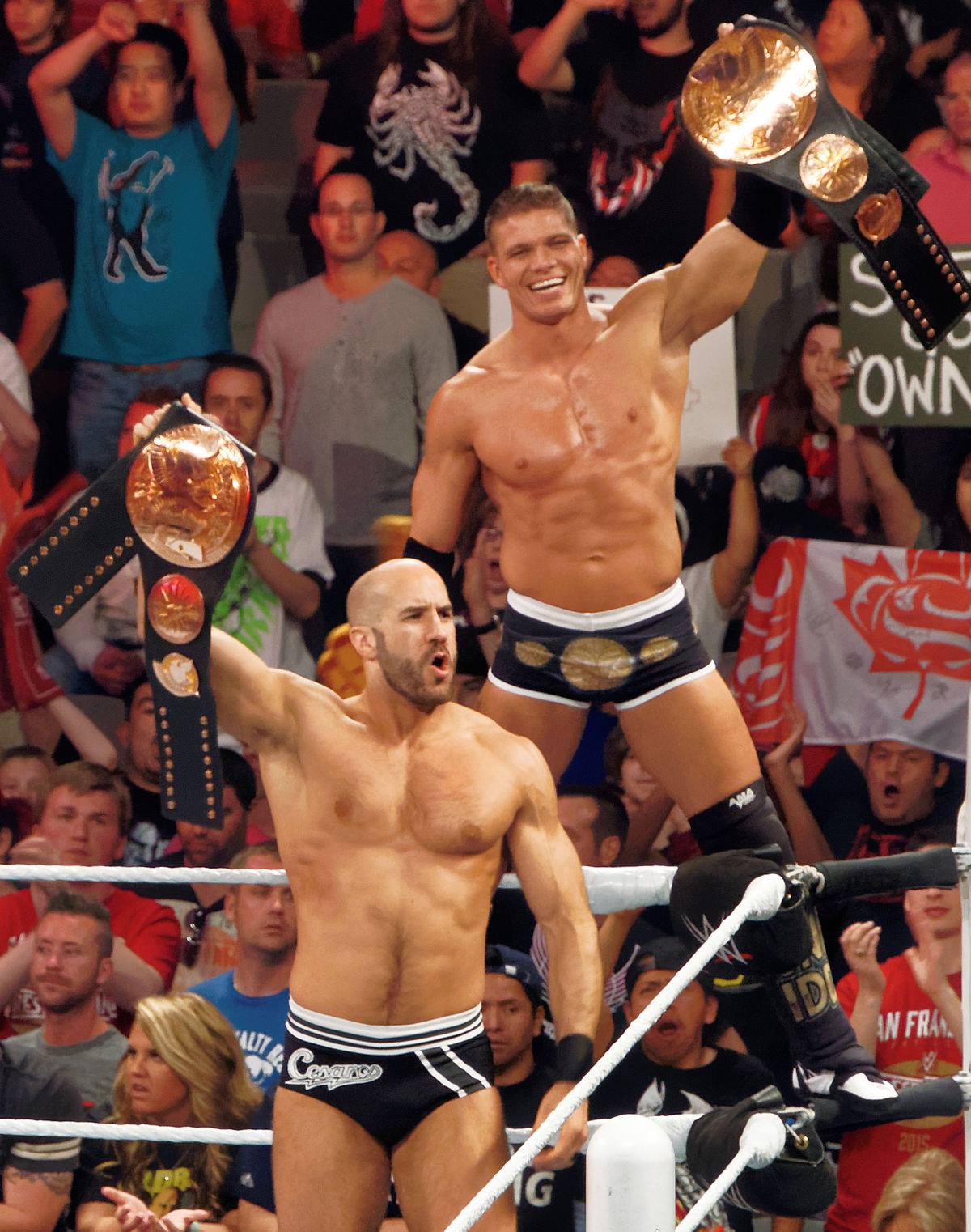 Thoughts: The great case of What Might’ve Been. In 2015, Kidd and Cesaro were having banger matches with the Usos and New Day and more than keeping up. The other two teams are strong top five contenders for this project, while Kidd and Cesaro were robbed of that opportunity with Kidd’s injury. In their six-month tenure, Kidd and Cesaro developed some great chemistry and teamwork. Their double-team giant swing-dropkick combo was a thing of beauty. Kidd’s moves were so smooth and fluid while Cesaro brought the muscle with the hardest uppercuts this side of Europe, pal. They worked as both faces and heels and were just a catchy team name and matching trunks away from checking all the boxes for a great tag team. I really love watching this team work. But the sad fact is that Kidd’s injury did happen, so this team doesn’t have the longevity to be high on this list. They never really had that top-tier match either, though their work leads me to believe it was only a matter of time, but unfortunately Kidd and Cesaro did not get that time as a team.

Placement Range: As much as I’ve enjoyed this team, I can’t justify them in the top half of my list. I also can’t see them falling off of it. They seem like a perfect 60-80 range team. And I’ll still wonder what might’ve been if not for Kidd’s injury (though that might have robbed us of The Bar, who are even more awesome.)

That’s it for this week. I’ll be back soon with a column looking at more teams. Again, if I missed any matches or other highlights let us know on the Facebook page.