It was almost 16 years ago to the day that the wrestling world bore witness to the inaugural, the historic, the very first ever… Lingerie Pillow Fight.

And what a Lingerie Pillow Fight it was. Strap yourselves in. 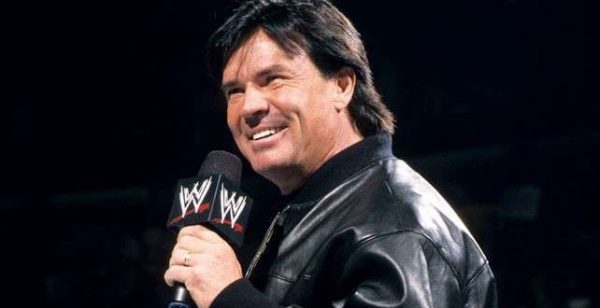 To set the scene, it was the brainchild of brand new Raw General Manager Eric Bischoff, fresh off handing the World Heavyweight Title to Triple H and wanting to continue making good life choices. So that’s… that’s pretty much it. He makes the match. So here we are. Milwaukee, Wisconsin. Monday Night Raw. September 2nd, in the Year of Our Lord 2002. Stacy Keibler vs. Terri Runnels in the first ever Lingerie Pillow Fight.

Oh by the way, I should mention that Stacy Keibler is actually the heel. I know I always forget because she gets pops either way. Anyway, in the ring we have a single bed, carpet, stuffed animals, and of course a bunch of pillows. There’s even a darn bedside table with an alarm clock on it. Thus the field of battle is set.

So, this. First of all, WWE Hall of Famer and known problematic Jerry “The King” Lawler is refereeing this match with his crown in one hand and a live mic in the other, I guess doubling as the emcee as he makes comments from inside the ring. To be honest I’m just glad both of his hands are where I can see them.

He announces Stacy as “The Greatest Legs in World Wrestling Entertainment”. He doesn’t specify so to be clear, the rest of her body did make the journey as well. Terri, on the other hand, is “vivacious and luscious”, so he’s being an equal opportunity Jerry Lawler today.

But hold that thought, because while Terri is making her entrance Stacy is getting to work on him already, trying to curry favour with the referee. She pushes him onto the bed and teases him, even spreads his legs, until Terri comes in, grabs a teddy bear, whacks Stacy and she falls and headbutts King right in the dick.

Terri picks her up to do it again and King squeals, “No no no!” Then he thinks about it for a second and goes, “What am I saying? Yes yes yes!” So I guess he outed himself as a masochist who likes getting hit in the junk.

Alas, Terri does not indulge his fetish and her and Stacy begin brawling around the ring instead. At some point, King remembers that he’s the referee and rings the damn bell. We are underway. They grab the pillows and start banging on with them and let me tell you, they were swinging for the fences because both girls were shoot selling some of these pillow shots.

Terri spanks Stacy. I leave that without comment. (Except to ask, seriously, what do you guys get out of this?? Does this really do it for you?? I do not understand het culture at all.) 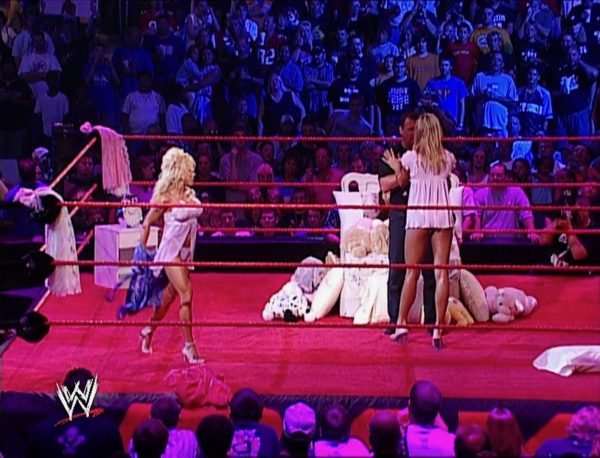 ANYWAY it gets far more interesting when Stacy reverses a sunset flip, ends up on top and then tries to SMOTHER TERRI TO DEATH WITH A STUFFED ANIMAL. King was in the middle of asking “Should I count?” when she does this, and he does not count, so apparently this referee draws the line at attempted murder.

Stacy gives up on asphyxiation as a strategy and goes outside to look under the ring for… something. We’ll never know what it was because she tried two sides of the ring, couldn’t find it and… just gave up and went back inside. I was HOWLING at this.

Meanwhile, Jerry Lawler is making his (first) offer of mouth to mouth resusciation to Terri, then gives her some sage wrestling advice: “Here, use your monkey on her!”

I stopped howling pretty darn quick when Stacy came back in and TRIED TO KILL TERRI AGAIN. For those counting along at home we’re 50 seconds in and this is the second attempted murder of the match. She gave her this stupid, reckless bodyslam right on the edge of the bed that had Terri whiplashing off and landing on her head. Stacy is in full on “If she dies, she dies” mode here.

The King, helpfully, offers Terri mouth to mouth again, while behind his back Stacy Keibler has taken a pillow and is stuffing the giant alarm clock inside.

She is going old school as EFF right now, and single-handedly turning this into the first ever No Holds Barred Lingerie Ultraviolent Pillow Fight Death Match.

Terri is now standing on the bed in an attempt to get away from The King, who is still trying to sell CPR to a perfectly conscious person – that’s not quite the protocol as I learned it in First Aid my dude. So as Terri is up there Stacy comes to take a swing at her with THE LOADED PILLOW but Terri leapfrogs it, bounces off the bed and LAUNCHES into THE MOST BRUTAL MISSILE DROPKICK IN WRESTLING HISTORY. She got so much momentum coming off the mattress, like a trampoline effect, that she absolutely FLEW off and damn near decapitated Stacy.

Let’s take a look at the scoreboard shall we?

Naturally Terri follows up a homicide attempt with… a sexy Bronco Buster, and Referee Jerry Lawler goes in the corner to break them up and tells them he’ll count to… 20 minutes.

Terri follows up the sexy Bronco Buster with the sexy Mickie James-style huricanrana out of the corner (and they’re both barely wearing anything so you can just imagine…) but she goes for this ‘rana and Stacy damn Keibler CATCHES HER IN MID AIR LIKE SHE’S JOHN FLIPPIN’ CENA.

This match is bonkers. 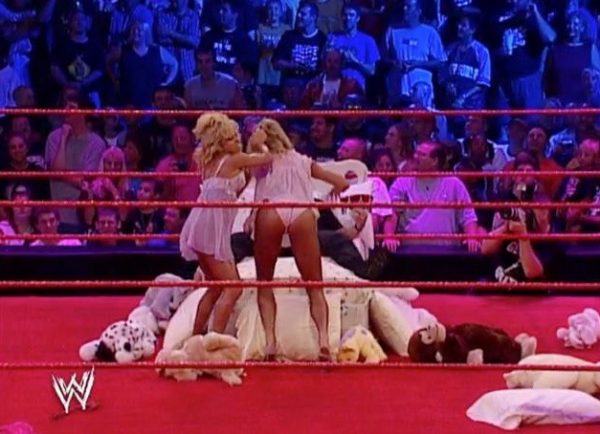 Stacy not only catches her but holds on and carries her around, and WWE Hall of Famer Jerry “The King” Lawler takes this opportunity to, deadset, GET DOWN ON ALL FOURS AND LOOK UP STACY’S SKIRT. I mean… fair dinkum. Stacy can’t see him doing this because she’s dealing with Terri’s vagina in her face, so she trips over him and falls onto the bed, with Terri landing on top in a pinning position, and The King, to his eternal credit, only stops to stare at Stacy’s arsehole for like two whole seconds before counting the pin.

Stacy is super pissed about losing the greatest match of all time (and wouldn’t you be!) so she picks up THE LOADED PILLOW and absolutely WALLOPS Terri right in the back of the head for attempted murder #4.

“I think she clocked Terri!”

And it still isn’t over because Stacy goes searching under the ring again and FINALLY finds what she’s been looking for. Which is… a bucket? She dumps the contents on Terri, and at first you think it might be sewage or something along those lines, but then Stacy rips open a pillow and beats her with it until she’s covered in pillow feathers and you realise that Terri has been TARRED AND FEATHERED!

Shades of Memphis! Shades of Mid-South! Shades of Jerry “The King” Lawler! That very same King is here with us today, and he does all he can to help Terri in this humiliating moment by… grabbing her tit once. Just once.

I give this match A BILLION STARS.

If you can’t have fun with this complete and utter nonsense I don’t know what to tell you. This is the most confirmed hoot to have ever hooted or been confirmed.

What knocked me out is that I never even knew it existed. Even I think the pillow fight nonsense is super lame. Subsequent pillow fights are legit some of the worst matches of all time. I never imagined in my wildest dreams that a lingerie pillow fight could do this. But I have almost never laughed so hard through a match. I’ve watched it dozens of times since I first saw it a little over a year ago, and I’ve been positively gagging for a chance to talk about it in public ever since then. Today is the day.

Now, there is one more thing.

When I went through the match I talked a lot about the attempted murders therein, and obviously I’m joking when I say this, exaggerating (slightly) to make a point about how insane and dangerous looking some of these spots and these bumps are. Obviously, nobody was killed in this match… except for the fact that Terri Runnels was actually, legitimately almost killed in this match.

I am 100% fair dinkum right now, because this comes straight from Terri. She thought she was going to die.

See, when Stacy tarred and feathered her after the match Terri forgot to close her mouth when Stacy poured the “syrup” all over her, and it went down her throat. Then the feathers came, she inhaled a bunch of feathers and they got stuck in her throat too and she couldn’t breathe, she couldn’t even tell The King that she couldn’t breathe or communicate her panic, so she was lying there legitimately terrified that she was about to die on live television in her underwear choking on syrup and feathers.

Guys. If this isn’t a perfect metaphor for women in the Divas Era, I don’t know what is.

Here they are having this ridiculous, preposterous, two minute gift basket of bullshit (an actual pillow fight for God sakes!) with a man literally leering over them trying to sexually assault them the entire time. Just utter exploitative nonsense, and at the same time it was so stupid that someone still nearly DIED from it.

And yet despite all of that, I still absolutely loved it as a wrestling match and what stuck with me the most were the brutal moves and old school heel tricks the women were doing within it (or perhaps, in spite of it). So yeah, it pretty much IS the Divas summed up in a two minute nutshell.

When I first saw this match I had already watched over two years’ worth of footage by that point, knowing I wanted to do *something* with it when I was done, but not really sure what. I think it was after I hit replay for like the tenth time in a row that day that I said to myself “I HAVE to tell people about this!” And suddenly I saw what it was, what ultimately became this Divas Deep Dive series. These are the kinds of stories that I just *CAN* *NOT* *WAIT* to share with you all every week. I have to tell people about this stuff.

This match is what this whole project has been about for me – finding good wrestling, and great wrestling, and even just fun wrestling, and finding it in the places you’d least expect. I definitely did NOT expect this, at all. And now it’s my favourite thing in the world.

Stay tuned for more nonsense next week as I write about… something. I’m not sure what yet, I looked under two sides of the ring for an idea and then just gave up. But I’m sure I’ll find it.