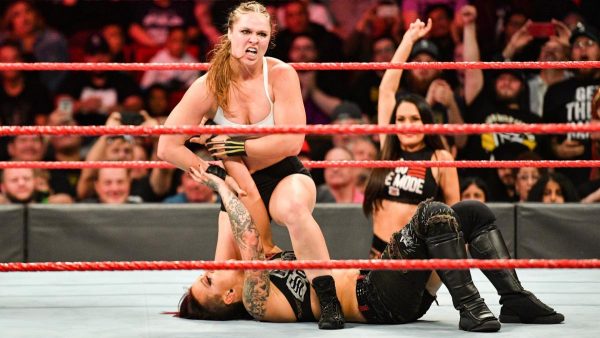 Matt: My match of the week is Ronda Rousey vs Ruby Riott. Great heel work from Riott. I loved the part of the match when Riott started fish-hooking Ronda, which is such a unique move that you don’t see often if at all in wrestling. Ronda is so damn good. Especially when you consider that she’s been wrestling for less than a year. You give these two 15 minutes on a PPV, you could be looking at a classic. I loved this match.

Jennifer: Johnny Freaking Wrestling looked like he got his groove back in this fast paced, acrobatic thriller with Tony Nese. I was a little worried at first because Nese looked jacked AF and Johnny has been trying to get his head right. I could easily see Nese coming in and taking advantage of Johnny’s shaken confidence. All my fears were resolved as Gargano countered Nese move for move. Even a gross buckle bomb wasn’t enough to keep him down. A few great reversals and then the Gargano Escape for the win. This was my first time watching Tony Nese and it certainly won’t be the last.

Runner Up: I wanted to throw a little love to my new lady crush, Lacey Evans. She and Candice LaRae had a really solid match. Lacey’s look is tremendous and she backs it up with power, heat, and a smart mouth. Candice’s reaction to her goading was excellent and authentic, but ultimately cost her the match.

Matt: On the Raw side of things, the segment of the week goes to everything that Elias and Kevin Owens did before Owens’ match with Lashley. The backstage portion was great and I’m really big on the idea of Elias having a tour rider. You get Elias his almonds you backstage goof! Elias is a master of getting crowd heat. The Supersonics line was great and I can’t remember the last time I heard a crowd that angry at someone. My goodness, the crowd heat for this segment was unreal.

On 205 Live, my segment of the week was the training/hype video for the upcoming Cruiserweight Title match taking place in Australia between Cedric Alexander and Buddy Murphy. I love things like this. It makes this match feel like a big deal. Training videos for big title matches is something that I feel that WWE can do more often.

Jennifer: SmackDown Women’s Champion Becky Lynch is so obsessed with becoming the face of the division that she took matters into her own hands. After a fiery speech, The Irish Lass Kicker unveiled a promotional poster for Super Show-Down featuring her standing triumphantly over Charlotte Flair. The Queen could not let this stand, however, and rushed out to spear Becky and toss her into the poster. To a chorus of boos, Charlotte twisted Becky into the Figure-Eight on the apron and flattened her with a kick. Then stood over her and let loose the famous “Wooooo!” Such a great feud between these former besties, I feel like we might be heading for an all-timer Down Under. 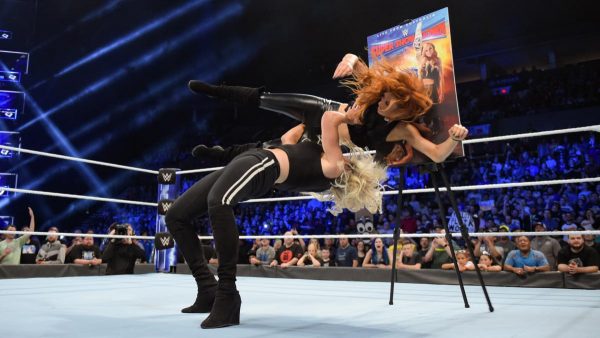 Matt: “Heroes, We all have them. Wonder Woman, Nelson Mandela, Me.” – Alexa Bliss

“I asked for almonds. Do these look like almonds to you?” – Elias to a backstage goof

“It doesn’t make sense; it’s like having a basketball team in Seattle.” – Elias regarding John Cena and Lashley teaming with each other

“You’re a loser, just like your husband.” – Lacey Evans 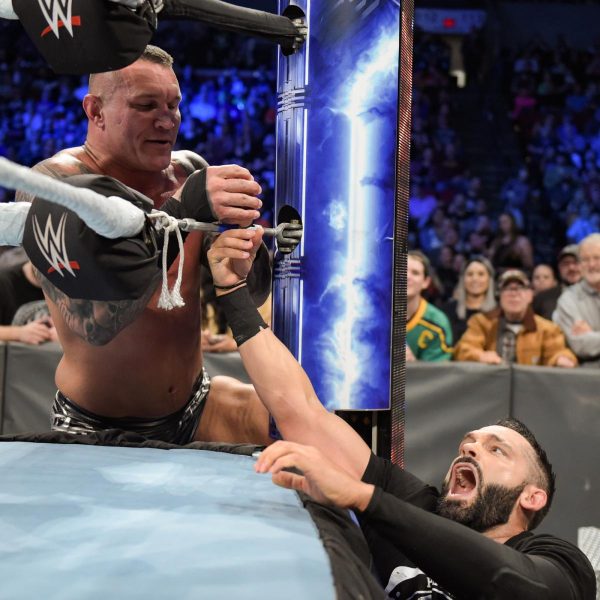 Matt: I really enjoyed all three singles matches involving the members of the Shield. It was a solid way to build to the six man tag in Australia. I loved the “A Moment of Bliss” segment. Fantastic promo work from Alexa and Trish vs Bliss might end up being the best match on the Evolution card. I don’t want to see the match and as much as I’m not a big fan of where this feud is heading, I thought that that the closing segment was an effective way to build to the Undertaker vs Triple H match on October 6th. Drew Gulak and Jack Gallagher’s post-match drubbing of Brian Kendrick was very well done and I look forward to the eventual match between Gulak and Kendrick. I’m digging this new gimmick for TJP as he is seemingly out to get the masks from all of the luchadors on 205 Live. I’m interested to see where this leads. Maybe a mask vs hair match vs a member of the Lucha House Party?

Jennifer: RANDY. ORTON. It is fascinating (and oddly hot) to watch him torture people. In this case, it was Tye Dillinger’s fingers that were nearly snapped off his hand. New Day Cooks! The guys and Mr. Bootyworth were going to share their pancake recipe before The Bar showed up and ruined it. Aiden English released a somewhat shady looking video of that night in Milwaukee where Lana allegedly came on to him. Fabulous Truth looked… fabulous against Almas and Vega in a mixed tag match. On NXT, EC3 and Lars Sullivan had a nasty, hard hitting brawl and I would like to see more of that, please. Jaxson Ryker of The Forgotten Sons is a lot of fun to watch as well. Tommaso Ciampa warned Velveteen Dream against further veiled accusations of his involvement in the Aleister Black attack, which I hope will be solved soon. 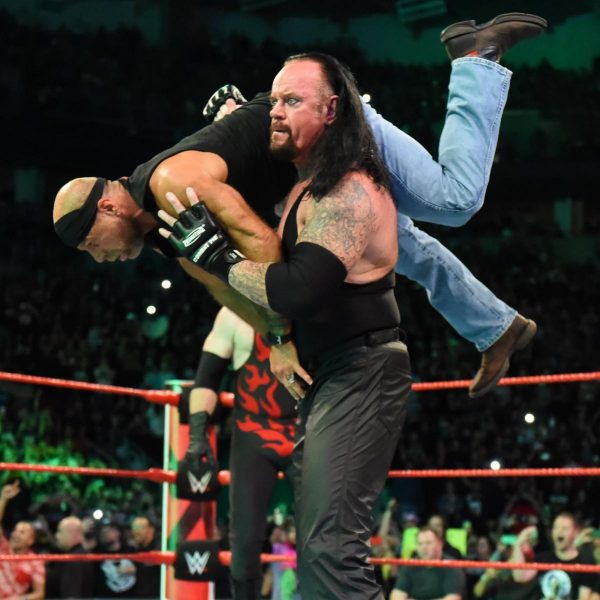 Matt: Last week, The Revival took the tag champs to the limit only to have them lose this week to The B-Team in four minutes. Makes zero sense. What are they doing with the team of Bobby Roode and Chad Gable? It seems like they just stuck these two guys together because they have nothing else for them to do. Remember when Bobby Roode was one of the hottest acts in the company? The tag division, outside of Ziggler and McIntyre, feels aimless. The main feud on Raw right now features four men who have a combined age of 206. You want a reason why people say that WWE has trouble building new stars? That was exhibit A. But perhaps most importantly, Shawn Michaels… Is… Bald. I am more than a little shaken up by this. The flowing mane. The luscious locks. GONE! Why Shawn why?!? Why would you shave your head?!? What happened?!? Who did this to you?!?! Was it Triple H?!? I have many more questions! This is not my HBK! It took 20-some odd years but the Heartbreak Kid has finally broken my heart!

Jennifer: Peyton Royce tappped out to Auska in a match that I didn’t care about. Again, nothing against either of them just not feeling them and their matches seem to slow the show down quite a bit.