Hello and welcome to “Weber Has Issues”, a weekly look at newly-released comics…and whether they’re appropriate “jumping-on” points for new readers. We had two worthy entrants this week, and I’m rather pleasantly surprised.

Before we go any further, you need to know this about me: I hoard things and keep them “on deck” to enjoy when I have some free time. I have about a dozen Steven King books on my shelf that I will read, someday (thank you Mom, I appreciate them all). I am YEARS behind on “Doctor Who”, but I hear great things about it. I am perpetually four weeks behind on “WWE NXT”. I have “Friday Night Lights” and “Sons of Anarchy” just waiting for me in my Netflix streaming queue. Finally, I’ve been putting off getting caught up on DC Comics’ “Justice League” for almost two years, and I have 12 issues of Marvel’s Hawkeye just staring at me. Keeping up on the maintenance of reading a 45-issue-deep monthly saver can be tough, hence my motivation for this column focusing on first issues that require no previous reading.

Justice League #22, (DC Comics, $3.99), by Geoff Johns and Ivan Reis, is the first issue of the title that I’ve tried to read since the first issue in September of 2011. I found that debut to be so-so, and very decompressed (written for the trade, just like everything else seems to be these days). This month’s installment, heavily hyped by DC, is the beginning of the “Trinity War”. Apparently, The Father, Son and Holy Spirit are splitting up in a big way.

No? Ah, the hot brunette from “The Matrix” is invading the DC Universe?

Not that either? OK. I guess I’d better re-read it.

I’m back. Alright, I guess there are several things going on here. We can discern that there are THREE discrete Justice League teams by the fact that there are three monthly Justice League books, but are they the “Trinity”? Or is DC reusing the title to represent Superman, Batman & Wonder Woman (last seen in a disappointing 52-week maxi-series from Kurt Busiek and Mark Bagley)? There’s also a mysterious trio consisting of longtime DC stalwarts The Question, The Phantom Stranger, and newcomer Pandora overseeing the wide-ranging story. I’m guessing that’s what they’re referring to here, but I can’t quite piece it together yet. This isn’t a great sign that this is going to be an easy-to-follow starting point for new readers. Everything in the promotional materials seems to indicate we’re in for an all-out war between the A-List Justice League, the second-stringers in the Justice League of America (put together to neutralize the global JL if necessary), and the weirdos in Justice League Dark (LOVE the concept, hate the name of the book).

We start with an unnamed female being dropped off in the rain in the Greenwich Village neighborhood in New York City. She finds the shop of the mysterious fortune teller, Madame Xanadu, who has long been a part of the magical corner of DC’s universe. Xanadu and Jane Doe’s meeting leads to a tarot card reading that becomes the framing sequence of the story.

Physical contact between the two leads to a premonition by Madame Xanadu: She sees the aftermath of a great war, and she sees the one word that defines it: Trinity. She asks, “What is the Trinity War”? Well, at least we’re not alone in this journey, Madame X is just as confused as we are. Xanadu goes to the cards, and the first card she overturns is Billy Batson/Captain Marvel/Shazam. That transitions to a scene featuring Billy in his orphanage, and the meat of the story is underway. Naive little Billy Batson wants to return Black Adam’s ashes to his homeland of Kahndaq (basically a fictitious Iran) but doing so would obviously cause an international incident. We get lots of time between the JL and the JLA, and there’s sufficient exposition to learn what’s going on in the storyline (but there are a few too many heroes included between the teams that may be confusing to newbies leading to questions like ”Who the heck is THAT Green Lantern”). Big, BIG things happen, and I’m not about to spoil anything major here (you know the drill by now). 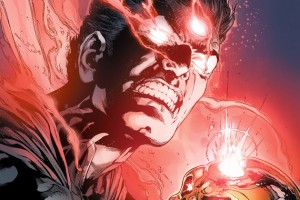 This issue reminds me a whole lot of the first issues of Infinite Crisis, Blackest Night and Sinestro Corps War, which were all big events also written by DC’s go-to guy Geoff Johns…this is a very densely packed story where lots of little things happen before something very big happens, and I have to say I really liked it. Stories like this are pretty much in my wheelhouse as a fanboy (my first favorite comic was JLA 200, where the big guys who founded the League match up against the newer members one-on-one). I initially feared this title would be tough to get into and would scare me away, but after a slow, non-distracted reading session I was able to follow it just fine. Your mileage may vary, but I really enjoyed the story and will read each of the remaining (Five?) installments.

My only quibble? I HATE it when the man-child version of Captain Marvel (he’s not “Shazam”, dammit, he’s CAPTAIN MARVEL!) is written without “The Wisdom of Solomon”, which is one of his core components; perhaps in this iteration he doesn’t have it yet. I must give Johns the benefit of the doubt here, since another major character acts WAY out of character in this issue and has an actual explanation behind his/her actions.

Reis’ art is awesome as ever; I just wish there were more killer drawings of my late-in-life favorite character, Aquaman. He’s gotten plenty of exposure lately, so I should count my blessings. Anyway, Reis rules and DC should pay him as much as they can afford; he’s this generation’s Neal Adams. 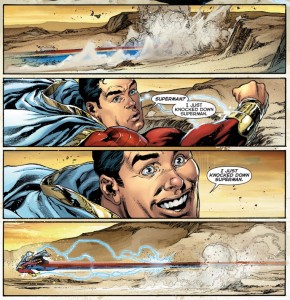 WHO WOULD LIKE THIS: People who like team superhero books/movies; fans of ensemble action stories like “The Expendables” and “Red” film series; longtime DC fanboys who want to catch up with what’s going on in the new 52; lovers of good clean comic book artwork.

Time to check out one of the more highly-regarded books from our friends across the way at Marvel Comics, Hawkeye. The avenging archer has been overcompensating for being portrayed as a blank in last Summer’s Avengers movie by starring in an outstanding self-titled Marvel Now! series. At least that’s what they tell me. I’ve been collecting Hawkeye from its release date, but have put off reading until now. I’ll put myself in my readers’ shoes and try to jump into the fray just as I did with “Justice League”. Yeah, that’s it, that’s the ticket. 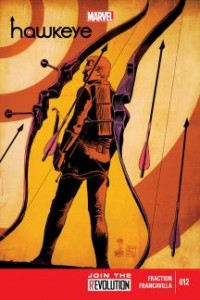 Hawkeye #12 (Marvel Comics, $2.99) written by Matt Fraction and with art by newcomer Francesco Francavilla was a great sucker-punch of a comic book that I really and truly did not see coming. I assumed I’d have to play catch-up with the status quo of this book, but all we’re given is a title page that reads:

Barney Barton,
the brother of Hawkeye,
traded on his brother’s name once upon a time.
Long story short, he was a fake Avenger and it worked out about as well as you’d think.
He’s been a carnie, a crook, an F.B.I. agent, a victim and a villain.
When Clint (Hawkeye) last saw him, he’d donated bone marrow to save his brother’s eyesight.
Also Clint might have stolen a whole lot of money from him.

I thought that looked sparse, but it’s all you need to know to read and enjoy this issue. This freakin’ rocked. I had no idea Hawkeye had a brother, but it doesn’t matter. We basically go through a day in the life of Barney Barton. And brother, that day is a doozy. Barney’s down on his luck and he’ll do pretty much anything for a little payday (get that mind out of the gutter, I said ‘pretty much’…this isn’t a Vertigo book). Barney, whose alter ego is “Trick Shot”(news to me, but I’m waaaaay behind), lets some comrades get the best of him before he plots revenge while waiting on a reunion with his kid brother. The book is a pretty quick read, but only because the storytelling is mostly done non-verbally. Regardless, this book is worth your $3, plain and simple.

If this series is consistently as good as this issue is, I’M ALL IN. Fraction nails the tension of a brotherly relationship with flashbacks to the Barton boys childhood. Barney, the big brother, has to look out for chip-on-shoulder Clint and his temper. I bought the connection between the two immediately, but what hit home was the boys alliance against their not-so-wonderful parents. The story choked me up at first read with tremendous emotional impact. I guess when it comes to brother stories, I (wait for it)…………have issues. Even if you’re an only child, this story is awesome. I can’t wait to have enough free time to tear into the rest of the series.

I don’t have any previous exposure to the work of Francavilla, but he did a fine job with the storytelling of this issue. There’s some subtle things going on with panels, colors and transitions, and they all serve the story well. The art reminds me a bit of a cross between David Mazzucchelli and Keith Giffen, and the use of nine panel grids remind me a bit of “Watchmen”. Good art that helps a great story. 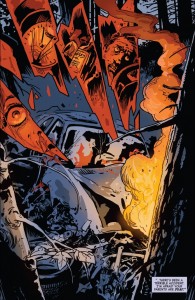 Other new comics I purchased this week: Batgirl #22, East of West #4, Star Wars #7 (see my above confession about comic hoarding), Superman: Unchained #2 (not as pretty this month but still great readin’), Astro City #2 (*** 1/2), and The Walking Dead #112 (I’ll let you know after my wife lets me check it out, it’s her favorite series).