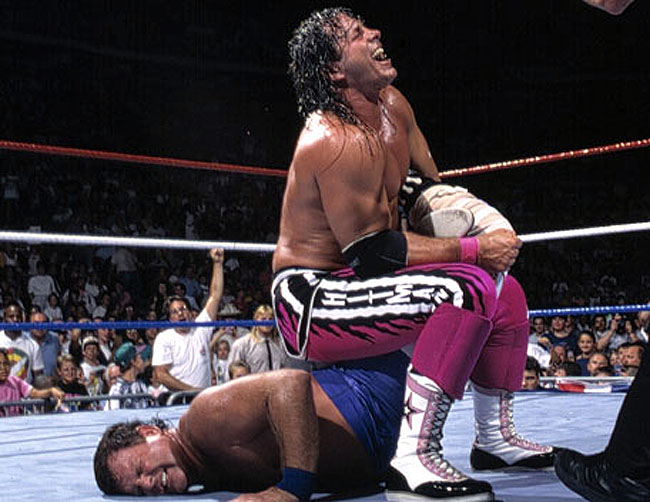 There can only be one king in the WWF. Back on June 13th, 1993 the World Wrestling Federation crowned a King of the Ring. One man in particular took offense to such a title being given. After all, he had been calling himself “king” for several years.

So, when Bret Hart won the 1993 King of the Ring tournament, Jerry “the King” Lawler ended up viciously attacking Bret when he was cutting a promo shortly after the victory. During the confrontation, Bret referred to Lawler as being a Burger King. Lawler responded by attacking Bret with a scepter. The attack would be the beginning of a feud that would go on for nearly three years, off and on.

During the July 7th taping of Wrestling Challenge, Jerry Lawler would beat Bret’s younger brother Owen Hart to send a message to the Hart Family that he would do the same to Bret at SummerSlam in August. Lawler would continue to get underneath Bret’s skin by taunting his parents during the July 26th edition of RAW. Bret was wrestling against Bam-Bam Bigelow before he left to get his hands on Lawler, who had been in the crowd taunting Stu and Helen.

Meanwhile, Lawler and Bret were also feuding in Jerry’s promotion USWA based in Memphis. The roles were switched as Lawler was the babyface and Bret played the heel. In that promotion, they would have a steel cage match the night before SummerSlam. A stipulation was if Lawler were to lose he would refund the money he earned from the show to the fans. Of course, Lawler was able to win after the Giant Gonzales botched his interference and cost Bret the match. I thought that was an interesting tidbit.

At SummerSlam on August 30th, Lawler tried to get out of the match with Hart by saying he had suffered an injury. It worked at first and he was able to get Doink the Clown to take his place. Bret won the match over Doink and was attacked by Lawler afterward. Lawler whacked Bret with his crutch and that led to them having a match shortly there after. Bret originally won by submission, but he refused to let go of the hold. So, as a result, Lawler won the match by a reverse decision. The victory allowed Lawler to have the title of being the real king of the WWF.

Bret and Lawler were supposed to continue their feud at Survivor Series in November, but Lawler had legal issues he needed to attend to and took a leave of absence from the company. He would return in early 1994 but his feud with Bret wouldn’t be a focus for the rest of that year outside of Lawler trashing hart on commentary.

Their feud continued in early 1995. William Shatner made an appearance on the January 9th edition of RAW and along with Bret Hart, he got the better of Jerry Lawler on King’s Court. A month later, Bret Hart cost Jerry Lawler a battle royal by forcing Lawler to have both feet touch the ground as he tried to hop around on the floor.

Lawler began to drag Bret Hart’s name in the mud during the February 20th edition of RAW. Lawler called Bret a racist after Bret won the Wrestler of the Year award. Jerry believed Bret won the award because the Japanese vote wasn’t counted. This would lead to a feud with Hakushi, but more to come on that.

It seemed like Bret wasn’t able to beat Lawler on a national stage as they wrestled again on the March 13th edition of RAW. Lawler won by count-out after Bull Nakano prevented Bret from returning to the ring. They would finally have another match at the first In Your House on May 14th, 1995. At the event, Bret Hart had two matches. He first beat Hakushi but was unable to beat Lawler. Instead, Bret was pinned by Lawler after Hakushi interfered and splashed Bret several times from the top rope.

They would meet again at the King of the Ring, but it wouldn’t be a normal match. No, instead they competed in a Kiss My Foot match where the loser would be forced to kiss the winner’s foot. Hart won and Lawler was forced to kiss both Bret’s and his own foot. Lawler was embarrassed and would end up going to a dentist to fix his mouth. This wasn’t any normal dentist, though. The dentist was evil and known as Dr. Isaac Yankem. Lawler wouldn’t be seeking revenge personally, but rather he recruited Yankem to do it for him. 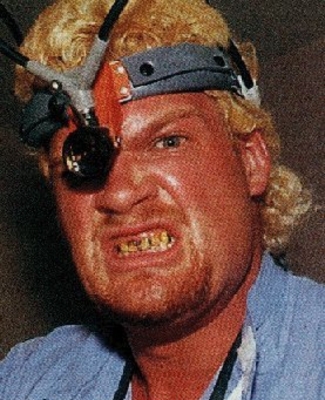 At SummerSlam, Bret Hart was able to beat Yankem but only be disqualification thanks to Lawler getting involved and attacking Bret. On the October 2nd edition of RAW, Bret attacked Lawler following a match but Yankem saved his friend. Two weeks later, Bret competed against Yankem inside a steel cage, which saw Lawler inside a smaller cage above the ring. Bret won the match by escaping over the cage essentially winning the feud and putting an end to his issues with Lawler.

The feud between Bret Hart and Jerry Lawler was one of the few highlights for the WWF during 1993. It was a personal feud and Lawler did a great job of doing things that were rather shocking. The incorporation of Bret’s family into the feud really helped spark it. Lawler seemingly carried the feud all by himself when it came to promos. He would add a lot more to the story than Bret would, in my opinion.

If Lawler didn’t have the legal issues at the end of 1993, I’d imagine the feud would’ve been that much better and memorable. They didn’t have any feud throughout 1994 and their rehash in 1995 was not nearly as good as their issues in 1993. There wasn’t a lot of interest in their feud for me in 1995. Was it still a good feud then? Yeah, but it was just a quick way to finish their lingering issues from 1993.

By that point, the feud had morphed into Bret Hart vs. Hakushi and Yankem, who were friends of Lawler. The program was intense and personal in 1993 but come 1995 the feud was more comical. I mean, there was a Kiss My Foot match and Bret had a feud with an evil dentist. It just hurt the rivalry, I thought.

Overall, the feud from June to August ’93 was really entertaining and fun. The year long hiatus of the feud due to Lawler’s legal issues really damaged the feud. When they returned to the feud in 1995 it was just poorly executed and the feud wasn’t able to regain the steam it had previously had.

I wouldn’t give the feud a thumbs up or a thumbs down. Instead, it would be right in the middle. The earlier stuff between them is entertaining and would be worth the view.

What are your memories of the feud between Jerry Lawler and Bret Hart? Feel free to share your opinions over on our Facebook page!