That was quite the weekend, no? A magical Tuesday to you and here is yet another “Weber Has Issues”, where we check out recently released “jumping-on-point” comic books. I have been waiting for this week all Summer. I finally have an opportunity to write about one of my favorite current comics. Settle in with a flagon of mead, ‘cause we’re about to talk about Thor and Mjolnir all up in here.

I didn’t read many Thor comics as a kid, but I did have an aluminum Marvel lunchbox that featured him prominently (but didn’t say “Avengers” anywhere on it).

I later saw an episode of “Spider-Man and His Amazing Friends” that featured Thor. There are clips of that episode on YouTube; boy, did they get his voice wrong–he sounds like “Fred” from Scooby-Doo!

I also enjoyed Thor’s participation (particularly his dialogue) in the “Marvel Super Heroes Secret Wars” classic series, which as you may recall is my favorite Marvel crossover tale. Reading (and liking) Thor’s endeavors in “Secret Wars” led me to explore what was going on in his own title, and that introduced me to the epic run of Mr. Walt Simonson.

Simonson’s legendary time as both writer and artist on Thor redefined what could be done with the Asgardian God of Thunder both in his home realm and lasted for nearly five years. Simonson deeply explored Norse mythology and gave Thor a powerful and kinetic look. He fleshed out Thor’s supporting cast and restored ‘Goldilocks’ as a Marvel force to be reckoned with. Simonson created THE definitive Thor.

My next statement is not hyperbole:  this current series, “Thor: God of Thunder”  is even better-written than Walt Simonson’s “Thor”. 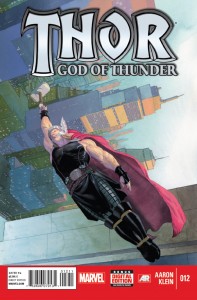 Thor: God of Thunder #12 (Marvel, $3.99) with story by Jason Aaron and art by Nic Klein features the aftermath of the “God Butcher” saga that wrapped up last issue, but this comic can be (and should be, dammit) picked up by anyone wanting a great read. Thor: God of Thunder is a universally-acclaimed monthly comic that features three simultaneous Thors from different eras (in the age of Vikings, in the current Marvel Universe of twenty different Avenger titles, and in the distant future, where he rules the realm of Asgard). It’s not nearly as complicated as it sounds, and the splash page catches you up to date in a concise and understandable manner. That’s all we ask for here at “Weber Has Issues”.

This stand alone issue is elegantly framed with a brief look at “Viking-era Thor” returning to Earth/Midgard in the beginning of the issue, and “Future All-Father Thor” doing the same in the epilogue. The main sequence of the story features the contemporary Thor in a “day in the life” archetypical tale, examining his role here on Earth and why his mortal connections are so important to him.

In this comic, Thor travels all over our planet and reconnects with people from his past and also responds to a fan’s rather unique request. It’s fascinating to see Thor act in a way befitting a pastor or an ambassador. In the course of twenty story pages, we see example after example of just why the people of this planet are important to him and in his own words, “Thor always returns to Midgard. No matter how much it pains him”. As an extremely long-lived other-dimensional entity (ok ok, “a god”) Thor is cursed to outlive every Earth buddy, every girlfriend, every puppy he ever connects with, and yet here we see just why he prefers staying down here with us mere mortals. 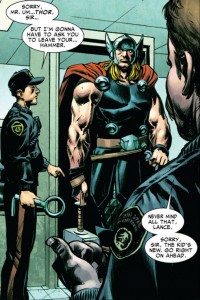 This issue is as unpredictable and compelling as the rest of this fantastic series has been. Jason Aaron (whose superior work on Vertigo’s “Scalped” was easily my favorite of his books) is knocking it out of the park issue after issue with “Thor: God of Thunder”. This book balances action, drama, romance, pathos, and humor better than any other superhero book that’s currently out there. Aaron casually drops a funny “Thor-speak” line in an otherwise somber conversation that made me nearly spit out my Pepsi One.

The art by Nic Klein is good, but not quite up to the level established by the regular series’ artist Esad Ribic, whose watercolor-influenced work gives this book its usual larger-than life feel (he does provide the cover if you want to see what I’m talking about). Still, Klein conveys the emotions felt in the conversations between Thor and ‘average joes’ very well, especially a very touching scene that takes place on the moon.

The second “Thor” film is coming out very soon (two months that are just going to fly by, I tells ya) and this book is gearing up for a compatible story featuring the movie’s villain in the coming issues for crossover readers. I’m really looking forward to it, but then again, I’m always looking forward to a new issue of this title.

Thor: God of Thunder #12 earns my highest recommendation. Buy this book. Buy it in issues, in hardcovers, wait for trade paperbacks or get digital copies, just get this series.

Once more, with feeling: Now, it’s time, live and in living color:

In descending order, here are my picks for the most influential (and also my favorite) artists to have drawn The Mighty Thor: 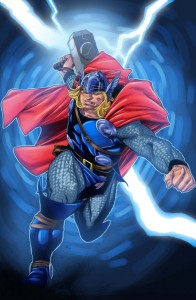 5. Olivier Coipel: This artist from France created the look for the current version of Thor, and his redesign is still in use. Coipel certainly made Thor look both powerful and regal, and has given him more of a Viking look that will hopefully stick around a long time. 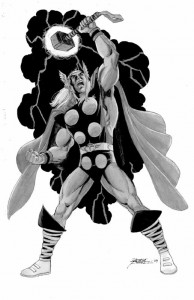 4. George Perez: My favorite overall comic book artist draws a mean classic Thor. Most of Perez’ best work on Goldilocks was in the 1998 “Avengers” series (and the Avengers/JLA team up). The four years Perez worked on the book gave us lots and lots of pretty drawings of Thor to look at. 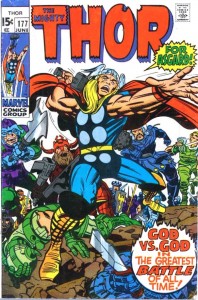 3. Jack Kirby: C’mon, he’s “the King”. Kirby co-created Marvel’s Thor in 1962 and gave him the look for which he’s still known today. Kirby’s bulky Thor was a powerhouse and one of Kirby’s signature characters. Kirby also created many of the iconic looks for Thor’s supporting characters and of Asgard itself.  I didn’t appreciate Kirby as a kid, but eventually I learned to give “the King” respect. 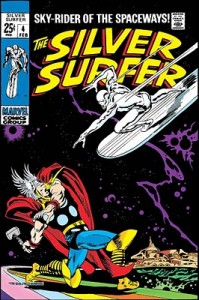 2. John Buscema: Picking up where Kirby left off, Buscema’s Thor was a dynamic hammer-wielding basher. He drew my absolute favorite cover (“Silver Surfer #4″) and illustrated Thor for three decades in Avengers and Thor’s own title. Buscema also taught me how to draw Thor (I’ve long since quit drawing) in the “How to Draw Comics the Marvel Way” book and VHS tape. 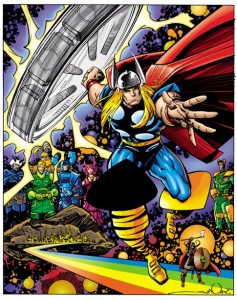 1. Walt Simonson: Simonson is synonymous with Thor. Someday, oh someday I’ll get an orignal page of Simonson Thor art or even a convention sketch, Simonson’s work is that important to me. I’ve been talking up Simonson’s Thor to friends for nearly 30 years, and I’m not going to stop anytime soon (even though the current Thor book is even better-written).

I recommend buying comic in person whenever possible and supporting your local comic book brick-and-mortar store (visit mine two favorites at https://facebook.com/pages/A-1-Comics-Inc/143922524867 and https://facebook.com/pages/River-City-Comics-and-Games/270845306275971) or by using Comicology’s nifty comic-reading app. To find a comic shop near you, call 1-888-COMIC BOOK.