A good week to you, and welcome back to “Weber Has Issues” where I examine new comics that are easily accessible and don’t rely on a reader’s previous knowledge of continuity. This week I’m taking a look at a new book that aims to do just that by using some fairly obscure characters and giving them a contemporary spin.

Confession time: I’ve never seen the polarizing “Flash Gordon” film from the ‘80s. I’ve heard some of the Queen soundtrack, so I suppose that counts for something, but I dunno, I never felt the need to check out “Flash Gordon”. My knowledge of his exploits relies solely on the mediocre animated series from Filmation.

Similarly, I don’t really know much about The Phantom. I felt no compelling reason to watch the 1990‘s Billy Zane film which featured he character. My favorite thing about The Phantom? That Rey Mysterio (then “Jr.”) wore Phantom-inspired ring gear for my favorite match of all-time at Halloween Havoc ’97. (I later saw the tights on display at the ill-fated Nitro Grill in Las Vegas).

Mandrake the Magician…..now that’s a name I haven’t heard in a long time. Mandrake is an adventurer who predates Superman and has been in newspaper comic strips continuously since 1934 (though is now in reprints). Imagine Harry Houdini as a crime-solving mystic and you get the idea. 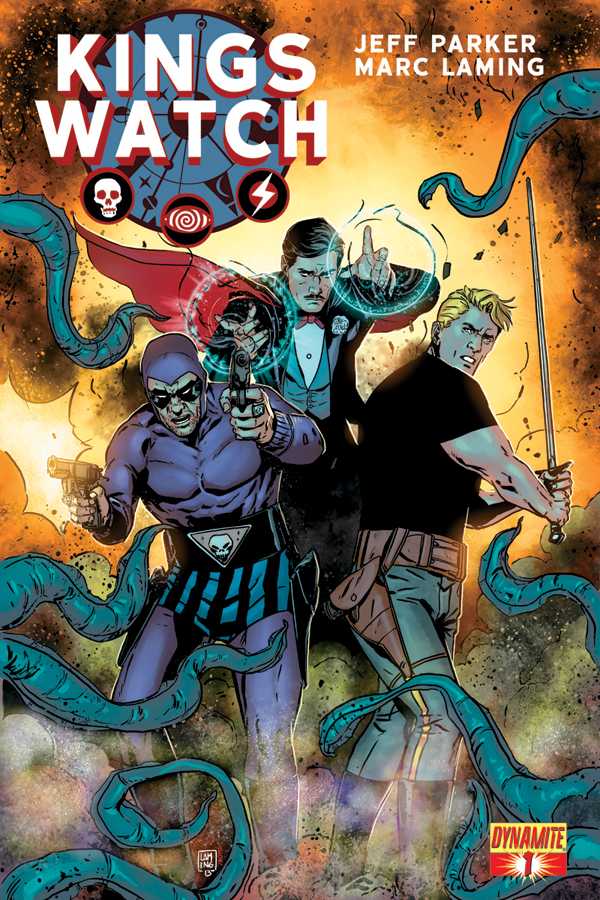 Kings Watch #1 (of 5, Dynamite Entertainment, $3.99) by writer Jeff Parker (Batman ’66) and artist Mark Laming throws together the three mostly-forgotten icons into an apocalyptic adventure that is fun and thrilling. Each character gets a brief introductory chapter that tells just enough for the new reader to get the essence of Flash Gordon, The Phantom, and Mandrake (who are all property of King Features Syndicate, hence the “Kings Watch” title (though the ‘The King’s Watch is not coincidentally used as the name to an inter-dimensional portal that will let through some scary bad guys in future issues).

The story is not retro at all, and treats all three leads seriously. The Phantom is actually something of a badass here, despite the purple striped boxers. Flash Gordon as a wisecracking alpha male works very well in this context. Mandrake is only seen for a page, but it’s an intriguing take. Mandrake has a demon trapped in his Northern California home (That sounds familiar–I have a demonic three-year-old son and live in Northern California) and uses the demon as a barometer for how bad the situation really is.

The art is excellent, and Laming draws both jungle action and interpersonal communication very well. The layouts are easy to follow and the characters are easy to identify, and that’s all I ask.

We also spend time with Dale Arden, historically Flash’s love interest and here our POV character. She’s experiencing end-of-the-world nightmares along with the rest of humanity, but will undoubtedly be swept off her feet by the swashbuckling Gordon.

I haven’t decided if I’ll be reading the rest of this series in issues or in trades, but I will be checking it out one way or another. It’s a solid tale that did the near-impossible: It made me enjoy Flash Gordon and The Phantom. “Kings Watch” #1 passes the Weber Has Issues test: Anyone can pick this up and enjoy it without knowing anything about what has gone before.
If the story is anything like this, I’ll be looking forward to Jeff Parker’s upcoming run on “Aquaman” (you may not know it, but the fish-head is my favorite superhero).

WHO WOULD LIKE THIS: Fans of TV shows like “Lost”, Comic readers who are into the classics, people who aren’t necessarily into the “big two” superhero universes.

THE FIVE LOOKS OF DOOM:  This week, since we’re talking about The Phantom, I take a look at Rey Mysterio’s top Superhero homages.

This tribute was more subtle than others he’s done, but I appreciate the bat ears on the Lucha mask.

More creepy than awesome, but a nice effort nonetheless.

I almost prefer this to the weird costume they put Chris Evans in for Avengers.  Love Rey’s mask here.

This look gets me nostalgic for WCW/NWO Revenge on Nintendo 64.  I love that this costume made it into the game.

Baby, I dig this look the most.  Despite Rey obviously being on the famous Todd Weber’s “Velveeta and spam sandwiches on sourdough bread” diet at the time, the look is an awesome tribute to the DC speedster.

I recommend buying comic books in person whenever possible and supporting your local comic book brick-and-mortar store or by using Comicology’s nifty comic-reading app.  To find a comic shop near you, call 1-888-COMIC BOOK.