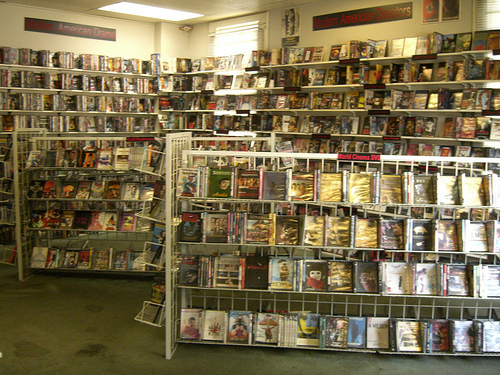 Justin: Jen, there is nothing that screams “1990s” more than video stores! Let’s do this.

Which was your favorite store? Which was most popular in your area? Any memorable characters that ran them? Did you prefer the mom and pop outlets or the big chains?

Jen: We had a tradition, we would go grocery shopping and then stop at Major Video. And even better? When we were allowed to rent a video game too.

I don’t think Major Video was a major chain, but I think there were a few throughout Rhode Island. We did also have a couple mom and pop type places nearby that my parents liked a lot. As long as they had Disney Movies, I didn’t care. I can’t recall any characters at the video stores. You always see characters in movies that are obsessed with movies. I guess there was a reason for the stereotype, but I only remember one because he owned one of the stores. Sorry to disappoint, I always seem to come across interesting people. 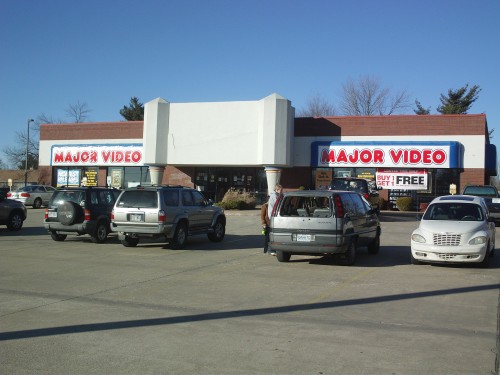 Justin: Major Video was pretty great, and was in a good location too. My favorite was the Movie Center, there were two of them and they always seemed to relocate throughout West Warwick. They had choice wrestling variety though, which was huge.

When I was eleven or so, I called to ensure they had the newest wrestling game in stock before my mom drove us over there. Apparently I called the wrong one (I thought the clerk’s name was Phoenix, not realizing part she meant the store was in the part of West Warwick known as Phenix). So we got there and they didn’t have it and I freaked the fuck out big time. I think we went the next night to the other store to pick it up but man that was a let down.

Renting video games was funny because I felt like I HAD to play it and nothing else until I returned it, even if I didn’t like the game.

Did you prefer the “pay by day” model or the “rent for two, get third free” type of setup? How often did you rent stuff?

Jen: I felt the same way about renting video games. I can’t recall anything that was a favorite game to rent, but I know it was always a special treat to get to rent a game as well.

When I got to middle school, a local place opened up about a mile and a half away, so I could ride my bike to the store and rent movies on my own! That was a big deal, at least I thought it was. That place didn’t have video games, but it did have a favorite – Camp Nowhere.

I’m pretty sure the only option we ever had was a pay by day type deal. I really can’t remember….

We probably rented videos weekly. My dad is a huge movie fan, and now he chooses to buy the movies rather than rent. My brother and I have tried to convince him to get discs on Netflix for years and it hasn’t worked.

I was just trying to think whether there are any physical movie rental locations around us anymore. I don’t think that there are, unless you count Redbox. It’s crazy how quickly the video store became extinct. 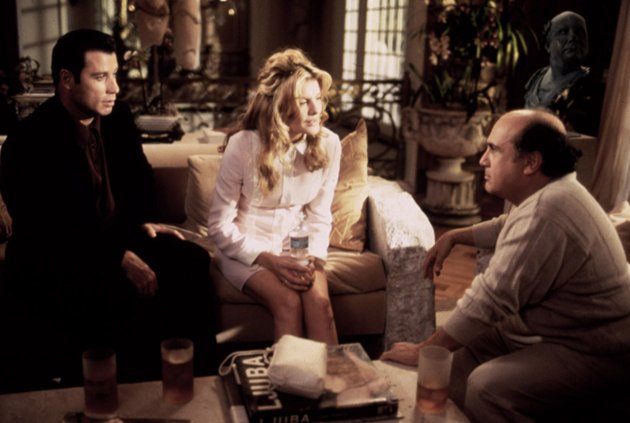 Justin: One time when we are about 15, Josh Richer and I walked down to the video store at the end of the street as tried to rent Get Shorty. The lady at the counter told us we were too young but if we got parental permission, she would allow it. So, like a dope I actually called my mom and she said no and I admitted as much to the clerk. Why didn’t I fake the call? Makes no sense. And why would she allow that without speaking to her? Lots of weird questions surrounding that one.

I loved the Stop & Shop video store. That was the greatest place to kill time while my mom shopped. They always had a good movie or wrestling tape playing (JOHN HARRIS FTW… he had Hulk Hogan vs. Big Boss Man in the cage playing on the TV!) and often had great deals in the For Sale bin too. One time I bought a used copy of the NES “Where in Time is Carmen San Diego” for like $5 and an awesome Coliseum Video version of Wrestlemania III (in its case) for $6.95. I remember the price because I still the case with the sticker on it.

They did go extinct hella fast, even quicker than the poor Dinosaurs. There was a Hollywood Video hanging around for a while in Cranston when I lived there. I’m also pretty sure the Blockbuster that replaced Major Video stuck around there until the bitter end too.

Did you ever buy anything from a video store? There is zero chance they could ever make a comeback, right?

Jen: I can’t believe you went through all of that to rent Get Shorty, and your mom said no! Pretty hilarious that the lady just let you call for yourself. With Redbox and Netflix, kids these days don’t have to go through all of that.

Sometimes we’d rent from the Stop and Shop video store, but mom never let me hang out in the store while she shopped. She always made me stay with her, I think it was so I would help keep an eye on my brother. He had a tendency to run off. If I could escape, I hung out with the magazines. Oh, how I loved Teen Beat and Bop Magazine. The video store was gone from Stop and Shop long before we even started working there. Good call to get out that early Stop and Shop, banks make you way more money and you never had to incur the losses that Blockbuster did. 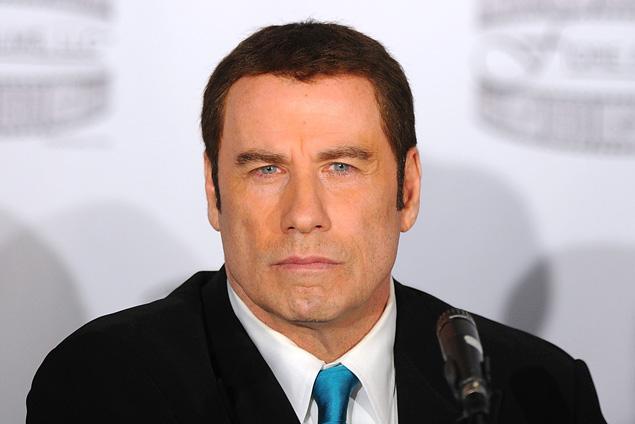 Justin: In every other store, the magazine rack was king but S&S Video trumped it every time.

Towards the end, I would poke around dying stores to see if they were unloading any good movies or wrestling tapes. I built up a decent little collection on the cheap that way. DVDs had such a short run on top. I mean there was a time that we wouldn’t leave WalMart without having purchased at least one movie, if not more. And now I feel like I rarely ever put in a movie or TV show on DVD.

Do you think TV series on DVD lent itself to the rental game? It seems like it would like it does with Netflix but I don’t remember ever really renting a TV series at the store. I guess it was a pain because it was always broken up into multiple discs to rent.

I have a funny story coming, but did you ever traipse back to the RESTRICTED SECTION? You know the one!

Jen: I think that the idea of renting TV shows on DVD was good in theory, but having to rent one disc at a time totally ruined it. I never rented any TV shows at the store for that reason. It definitely paved the way or NetFlix and watching shows in bulk. Even getting one disc at a time on NetFlix is kind of annoying. I’ll check Hulu or Amazon Prime to find a show before signing up for receiving one disc at a time. Waiting two days to receive it in the mail seems to lose the momentum.

Ha! The restricted section! I wasn’t brave enough to peek back there until I was older, and when I finally did the owners of the video store just stored everything in black cases. So, I saw nothing. Pretty lame.

Justin: I snuck back there a couple of times at Major Video but by the time Blockbuster took over, the restricted section was long gone… Stupid “family friendly” sanitation!

When my cousin Matt visited some family in Germany, he wanted to rent a few wrestling tapes, natch. However over there for some reason, the wrestling tapes were in the restricted section and since he was like 13, he couldn’t go browse on his own. So he had his mother and my cousin going in and out to show him the options of tapes he could rent. The thought his mom pilfering through all of the adult film titles while grabbing a copy of Invasion of the Bodyslammers always makes me laugh.

So, final thoughts about these stores that seemingly existed in such a brief blip of time, yet brought joy to so many of us. Friday night? Rent a movie! New video game is out? Hit the Movie Center! I think the smell of the stores is still just burnt into my brain. The mesh of plastic and mustiness…never forget.

Jen: Ha! That is pretty funny, and also incredibly weird the wrestling videos would be stored there.

Last thought…it’s kind of sad that kids born after say 2004 won’t ever step foot in a video store. The only places they may come across the characters that worked in video stores these days might be the actual movie theater, or maybe Game Stop.

Justin: That is a very sad thought, Jen. Way to end this on a depressing note. As much as the instant gratification of On Demand, Netflix and other streaming services is really awesome, I definitely do miss walking into the video store and scanning, searching and hoping that the title you want to rent is in stock and available. Any wrestling fan also has an extra special spot in their heart for the old video store as well. Without it, growing up in the 80s and early 90s, there would have been no way to go back through time and learn about everything that happened before you started watching.

So, someday in the far future when society wants to go back to being more communal and less individualized, maybe the video store will make a revival. And if it does…please remember…always stay away from the Gene Picks! (Gene is Trash!)