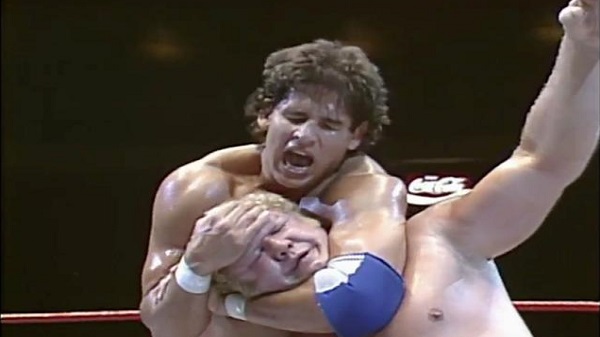 So after a 1-week hiatus where we headed up North of the border for the Big Event, the VV Previewing is back in action as we are back in the hallowed halls of Madison Square Garden. As the summer was coming to a close and the fall was beginning, there were several guys that you wondered where they were headed and what their position in the company was. One of those guys on the roster who was in a state of flux was Tito Santana as his feud with Randy Savage had ended back in the summer, and now he was pretty directionless in that he had no major feud going on. On the other hand, Harley Race was had just become the King two months ago by winning the King of the Ring tournament and also got a big win at the Big Event over Pedro Morales, and as 1986 was coming to an end he seemed like a guy that was set for a good run in the midcard while also getting some main event matches sprinkled in. These were two guys that you figured could put on a good match if they were ever placed together and as they were set to face off this month at MSG, it would be interesting to see how the match turned out and who would win.

Since Santana’s last appearance at MSG back in July, the two men faced off at a house show on July 17th which Race would win and then they would face off again in the main event of the July 27th house show which ended in a draw. Since then, the two men stayed apart from each other with Santana trading wins and losses with several different men while Race was kept strong in his matches, including winning the Sam Mushnick Memorial Tournament in St. Louis on August 29th. Both men were kept pretty strong on TV as they would win their squash matches though Santana would have more competitive matches than Race did, and as both men come here to MSG it again would be interesting to see how the match would play out.

Race was pretty hot as a heel as he comes out with a lot of confidence and he has done a great job in enveloping the “King” gimmick despite how silly it seemed, and Santana was still very over with the fans as he gets a big pop from the crowd. One other side note is that Bobby comes out with his wrestling gear on under his jacket which was a nice touch as he was getting ready to wrestle later that night. The two men lock up to start with Race hooking a headlock only for Santana to whip him off and hit a dropkick, and he hits a slam and an armdrag on Race before working on the arm. Race gets to his feet and whips Santana off before hitting a stiff clothesline only to miss a falling headbutt, and Santana hits a second slam on Race before hitting another armdrag and he goes back to the arm of Race. Race fights to his feet and backs Santana into the corner before hitting a headbutt only for Santana to reverse a whip into the corner and Race sails over the top to the floor, and Race regroups on the outside before tripping Santana up and pulling him outside where he rams him into the guardrail. Race knocks Santana down and hits a falling headbutt on the floor before rolling back into the ring, and Santana recovers until Race stomps at him from the apron and drops to the floor only for Santana to block a ram into the post by sending Race into the post. Santana rams the knee into Race and pounds on him before rolling back into the ring as Race regroups before getting on the apron, and Santana grabs him and nails him as Race falls over the top back into the ring. Santana stomps on Bobby’s hand in a nice touch and stomps on Race only for Race to catch him with a headbutt to the ribs, and he knocks Santana down only for Santana to block a suplex attempt as he hits one of his own for a two count. Santana misses the elbow and Race knocks him down before hitting a belly-to-belly suplex for a two count, and then he drops a knee on Santana and then he drops an elbow on Santana for a two count. He hooks a headlock on Santana who whips him off and both men clock heads with Race falling over the top to the floor and Santana falls to the mat, and Santana goes after Race only for Race to hit a headbutt and he goes up top only for Santana to grab him and toss him to the mat. Santana drops a fist on Race and looks for the Figure-4 only for Race to kick him off as Bobby gets on the apron, and Santana again tries to hook the Figure-4 on only for Race to rake the eyes as Bobby falls back to the floor and then Race hits a stiff piledriver on Santana. Race attempts a falling headbutt only for Santana to avoid it and Race hits the mat as Santana starts to fire up on Race, and Race begs off in the corner as Santana pounds on him and he whips Race hard into the other corner before hooking a sleeper on. Race manages to grab the rope only for the ref to kick it away which made no sense since it should’ve constituted a clean break and Santana keeps the hold on, and he forces Race to his knees only for Race to escape the hold by hitting a low blow. Race hits an uppercut that knocks Santana down and then he hits an atomic drop which Santana blocks and he goes behind Race before hitting an atomic drop of his own, and Santana pounds on Race only for Race to catch him ducking with a kick. Race drops a knee on Santana and goes up top only to miss the diving headbutt and Santana again attempts the Figure-4, but Bobby gets on the apron and distracts Santana who grabs at Bobby only for Race to roll him up which gets the three and Race wins the match. After the match, Race goes outside and regroups with Bobby only for Santana to go after him and he fires up on Race, and he throws Race back into the ring only for Race to roll out of the ring and he heads to the back as the ref keeps Santana back.

The match itself was pretty good as both men worked hard for the 13 minutes that they got and put on a solid, basic match that you expect from two ring veterans like this. Even though Santana was starting to reach the apex of his prime and Race was pretty much past his prime by this point, both guys showed they could still go and put on solid matches for shows like this. These were matches that belonged on house shows like this with two established names going putting on a good match as opposed to some of the matches that we’ve seen over the last two years, and we would see more matches like this on the future house shows which would make them better. This was a good win for Race as he steals the win from Santana thanks to Bobby and Santana was getting into an interesting spot as he was still over, but he was moving into a position where he was putting guys over which he was good at though you wonder if he still had enough juice for another solid run as a top midcard face. The crowd was into the match and were hot for Santana, but they are not happy when Race gets the win. Race manages to steal the win over Santana and both men move on.