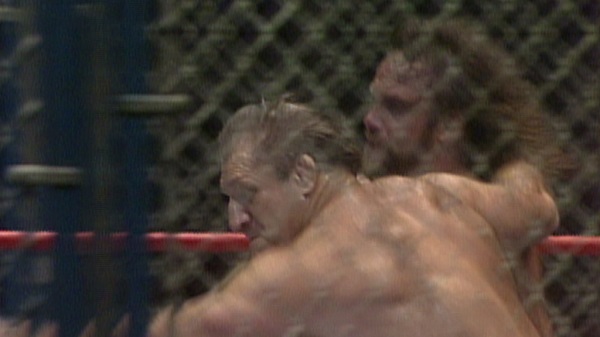 As we continue into the summer of 1986, there seemed to be a lot of flux going on with some of the members of the roster and that a few of the feuds that have been running for most of the year were clearly nearing the end. One of the those feuds was clearly the one between Randy Savage and Tito Santana which has been going since late last year, and considering that they added Adonis and Sammartino to the feud should be an indicator that the feud was almost over. As great as the feud has been and despite putting on really good matches, you figured it was time for both men to move on and doing it here at MSG was the perfect end while also having it inside a steel cage which is the perfect way to finish the feud. Plus the fact that Sammartino was almost seen as a special attraction for the MSG house shows makes this match even more special and you knew the crowd would be hot for this match despite how long the feud has gone.

Since their last match back in June, Santana and Savage have had one or two matches on the house show circuit though they have pretty much stayed away from each other and Adonis has also done his own thing. As mentioned, Sammartino was at the point in his career where he was seen as a special attraction for the MSG house shows though I think there was a feeling that he was nearing the end of his in-ring career as he did not like where the company was going. It is pretty sad to see since he was the guy that pretty much carried the company on his shoulders for the last 20 years and to see that coming to an end felt like the end of an era for the company.

The match itself was pretty fun as both men worked hard for the 10 minutes that they got and put on a fun cage match. Considering how long the feud between Savage and Santana has gone on, it only made sense for the feud to finally end and to have a cage be involved even with Adonis and Sammartino being brought in to spice up the feud. They have built the feud up pretty well and after their solid, if somewhat disappointing tag match the previous month they brought the fire this time around and put on a good brawl. It was also smart that Santana and Savage were the only ones that bled since they’ve had the blood feud and they focused on each other for most of the match. Adonis did his usual overselling including the dive off the cage which was an impressive spot, and Sammartino did his usual thing though you could clearly tell that he was nearing the end of his run as this would end up being his last appearance in MSG until his Hall of Fame induction in 2013. One other thing to mention is the commentary as Gorilla and Alfred have gelled incredibly well as a unit and have made these shows tolerable to watch amidst some of the dreck. But as mentioned, it was pretty clear that the feud has run its course as Savage needs to move onto something else while Adonis was also doing his own thing, and it would be interesting to see where Santana goes from here since some guys on the roster seem to be surpassing him on the face side. The crowd was into the match and popped for Santana and Sammartino when they won, but again it’s worth mentioning that Savage was winning the crowd over and you wondered how long it would be before they pull the trigger on a face turn. Santana and Sammartino get the win over Savage and Adonis inside the cage and both teams finally move on.

Thoughts on this match or the July MSG show in general? Leave them here to be read on-air during the Place to Be Podcast later tonight!