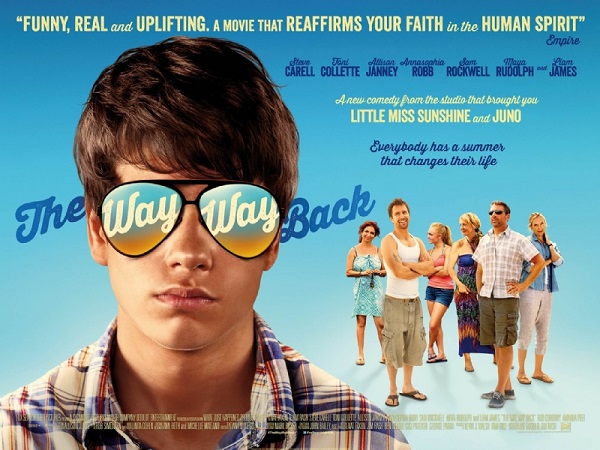 The Way Way Back

Grow the way you are destined to

When I first saw the trailer for The Way Way Back, I knew I had to see it and I was going to like it. The movie was released on July 26th of 2013 and was recently released on DVD. This is a story about a 14-year-old boy named Duncan played by Liam James. It centers on his relationship with his divorced mother Pam (Toni Collette), her new boyfriend Trent (Steve Carell) and a water park manager Owen (Sam Rockwell). The film ends up featuring quite the ensemble cast including Rob Corddry and Amanda Peet playing the roles of Trent’s friends Kip and Joan along with Allison Janney as Betty – the out of her mind neighbor – who has a daughter named Susanna played by AnnaSophia Robb. Rounding out the cast are Maya Rudolph, Nat Faxon and Jim Rash who all play water park employees.

This was a great cast that told a compelling coming-of-age story about a boy who needs to find his own path. The Way Way Back alludes to the far back seat in the station wagon where the movie opens. It is in that station wagon where Trent (Carell) asks Duncan what he is on a scale of 1-10. Duncan replies with a “6” while Trent tells him he’s more of a “3.” I will go more in depth with Carell’s character further down but at the beginning of the film you can tell it is an uphill battle for Duncan. This opener does set the stage for what will be a fun story to see unfold.

Early on in the film, Duncan is introduced to Owen (Rockwell) and there are glimpses of chemistry. Duncan’s growth throughout the movie is helped in part to Owen and their connection is one of comedy, trust and sentiment that drives the film in a great direction. The Way Way Back is full of sentiment and really makes you wonder what will happen next.

This movie is cut from the mold of many others and in the DVD featured commentary, the directors, Nat Faxon and Jim Rash, discuss the role of Owen. They noted that this character was created in likeness to Tripper from Meatballs played by Bill Murray. Rockwell has turned into one of the premiere actors in Hollywood and his charisma on the screen makes you want to see him more and more. He is the guiding light for Duncan who is continuing to develop on his journey throughout the film and as Owen puts it “You’ve got to go your own way.”

Rockwell’s comedy is second to none and his quirkiness is at an all time high. Every scene with him exudes the same feel good moments that Bill Murray brought to Meatballs over 34 years ago.  It is easy to tell that Owen has been through some tough times in his life and he sees hope in Duncan. He wants to be there for him and help him to become a better person at this crucial stage of his life. In essence, Owen is the father figure that Duncan wants and doesn’t have. Meanwhile his mother, Pam (Collette), has to battle her own demons.

Pam is a caregiver and someone who is looking to change things up in her life, starting with her boyfriend Trent (Carell). Early on, the dynamic between Duncan and Pam is somewhat frigid and confrontational but there is a genuine care and love that doesn’t go unnoticed by the viewer. She is one of the feel good characters that make you just want to scream “CHANGE YOUR LIFE FOR THE BETTER” while she continues to put herself through this whirlwind relationship with Trent. There are moments that show you how desperate Pam is to find love and what she is willing to sacrifice. It takes her to a whole new level and she is unsure what to do with her son, who at the same time is unsure about what life is throwing him. She tries her best to be the good mother and at some points succeeds but there is so much work to do.

If Pam plays the role of the good mother, then Janney’s portrayal of Betty is that of the not-so-good mother. Betty jumps out in the opening moments of the film as a drinker and a socialite who does add some feel good comedy. She too is recently divorced to a husband who turned out to be gay and that ends up being the butt of most her jokes. Betty is a very witty character that is a joy to see throughout the film and is used just enough to be effective.

She has a son, Peter, who is played by River Alexander who has a lazy eye. Peter plays it off very well and has a great deal of confidence that shows through his wit. Robb plays Susanna, Betty’s daughter, who is the same age as Duncan and is his love interest throughout the film. Susanna has some good development over the course of the summer and allows herself to grow to Duncan and come together when the time is right. This relationship isn’t rushed, but it takes time, like the movie to blossom. The relationship between Duncan and Susanna is something you expect from the movie and helps put it together with both actors doing a good job at the awkwardness that is 14-years-old.

On the other side of the coin, Carell’s character Trent is something I never expected. Let me preface this by saying I am a HUGE fan of The Office and of Michael Scott. I thoroughly enjoyed him in that show and I was even more surprised to see him take this part as Trent – a not so nice person. With Trent’s “You’re a 3” comment early in the film, it sets the stage for Carell to play a serious role and not rely on his comedy. Trent is kind of a jerk throughout the entire film and Carell pulls it off in a big way. From making Duncan wear a life preserver on a boat in which no one else is wearing one, to getting upset about the rules of Candyland, and then kissing Joan (Amanda Peet) behind Pam’s back, Trent turns out to be a true heel in every sense of the word. He is the kind of character that makes the movie more than what it is and gives Duncan a chance to stand up to him and grow throughout the film.

Trent’s relationship with Pam is shown to be on the rocks throughout the course of the summer due to his behavior. In the final moments, there is a confrontation that everyone wants to see and when it unfolds you have this overwhelming sense of satisfaction. That is exactly what this movie is all about. Duncan goes on this great journey with a cast of great characters and finds himself at the end. The recipe of Meatballs and Dead Poet’s Society rings true with a character that needs to break out of his shell and a charismatic mentor to help him along the way.

This was one of the best movies I saw all year and at the end I really did feel great knowing how the journey started and ended. It was a movie I was more than happy to add to my collection and something I could see myself going back to time and time again. Rockwell’s performance was incredible and Carell played the jerk to a T. Liam James was given a great role to springboard into Hollywood and I am looking forward to seeing what he does next.  I ranked this the 2nd best movie I saw in 2013.

Thank you once again for checking out my movie reviews. If there is a movie you’d like to talk about more, please feel free to shoot me an e-mail. Thank you for all your feedback and here’s to 2014 and the movies!