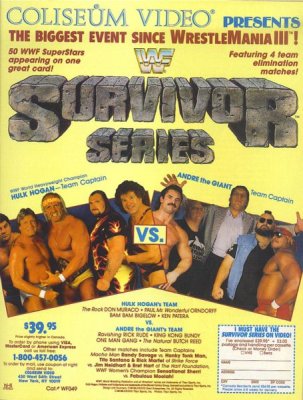 Here we are, the first pay-per-view ever ordered in the Ferrari household. With WrestleMania III back in March, the World Wrestling Federation raised the stakes for larger-than-life events. And with the new Thanksgiving Night event, Vince McMahon fought to keep his closest rival, the National Wrestling Alliance, from gaining any traction on pay-per-view.

The inaugural Survivor Series was scheduled against the NWA’s annual Starrcade, and McMahon tried to force the hands of pay-per-view companies by suggesting that anyone who aired Starrcade would lose out on WrestleMania IV. And the war between the “Big Two” was on.

Gorilla Monsoon kicked off the show by calling Survivor Series “one of the most prestigious events ever” in the World Wrestling Federation, though no titles were on the line. The four matches on the three-hour card were elimination matches – two 5-on-5 men’s matches, one 10-on-10 men’s tag team match and one women’s 5-on-5 match.

I would say that in the first 5 years or so of the Survivor Series, it was my favorite event of the year, with a lot of craziness in each match. It’s lost some of its prestige, even though it’s the second lasting show the WWF created.

The main event was built on the first face-to-face encounter between WWF Champ Hulk Hogan and his former friend Andre the Giant since WrestleMania III. And they milked the hell out of that for most of the match. While the two men got into it for a bit, One Man Gang and King Kong Bundy pulled Hogan out of the ring to get the champ counted out and stretch the feud out even longer. It was a great strategy to build anticipation, but Hogan does come off looking like he was ducking Andre for most of the match.

The match was also a coming out party for Bam Bam Bigelow, who looked like a superstar fighting off a 3-on-1 disadvantage against Andre, Bundy and Gang at the end. After disposing of Bundy and Gang, he fell to the Giant, and there’s no shame in that.

Worst Match: The Killer Bees, The Young Stallions, Strike Force, The British Bulldogs and the Fabulous Rougeau Brothers defeated The Islanders, The Hart Foundation, The New Dream Team, Demolition and The Bolsheviks.

The only reason this match is here is because I really didn’t get reasoning behind the booking. The new tag team champions, Strike Force, get eliminated early by former champions The Hart Foundation. The Harts are one of the Final Four teams but get ousted in a real fluky situation. And giving the win to the Killer Bees and the Young Stallions, two teams I never believed were championship material (even at 8 years old), just seemed very weird to me. The match was still fun for the most part, but probably had the potential to be better given the teams involved. It was disappointing more than just outright bad.

What A Maneuver!: The women’s 5-on-5 elimination match went back and forth between somewhat plodding and really exciting, depending on who was in the ring. The Jumping Bomb Angels raised the level of competition with the women in the match and some of the others – including Velvet McIntyre, Leilani Kai and the Glamour Girls – held their own surprisingly well. Kai put McIntyre away with a slingshot electric chair drop that I’m not sure I’ve ever seen again. Monsoon and Ventura put the women over as innovative and something special, but the match loses a little bit when you realize the announcers had no idea what to call any of these innovative moves. Once the Jumping Bomb Angels left the WWF, the quality of women’s matches dropped considerably.

Intercontinental Elimination: The kick-off of the Survivor Series had the Honky Tonk Man and a band of heel hangers-on against probably all of the main challengers for his Intercontinental Title – former champs Randy Savage and Ricky Steamboat, along with Jim Duggan, Jake Roberts and soon-to-be perennial challenger Brutus Beefcake. The Greatest Intercontinental Champion of All Time’s team did not fare well, leaving HTM against Savage, Steamboat and Roberts, leaving him no real choice but to walk in self-preservation, a frequent strategy in title matches. A fun opener that managed to set up several stories down the line.

Championship Trivia: Not one WWF champion managed to survive their matches in the inaugural Survivor Series: IC Champ Honky Tonk Man and WWF Champ Hulk Hogan were counted out; Tag Team champs Strike Force were booted fourth out of 8 eliminations; Women’s Champ Sensational Sherri was pinned by Velvet McIntyre and the WWF Women’s Tag Team Champs the Glamour Girls were sacrificed to the Jumping Bomb Angels.

Million Dollar Vignette: Before the main event, we got a video package on the new Big Bad of the WWF: Ted DiBiase. The Million Dollar Man showed off some of the ways he’s embarrassed fans during interview segments and other vignettes as he rode around in limos and drove fast cars while wearing a fur coat. If you didn’t hate the guy yet, you definitely did after the Survivor Series.

*DISCLAIMER* The Survivor Series Rankings are for discussion purposes only and in no way reflect an official or authoritative list. It is simply my opinion. Elimination match survivors are in bold.

4 – The Killer Bees, The Young Stallions, Strike Force, The British Bulldogs and the Fabulous Rougeau Brothers defeated The Islanders, The Hart Foundation, The New Dream Team, Demolition and The Bolsheviks

Of the 50 wrestlers involved in the first Survivor Series, only 23 managed to garner an elimination. Next time around, we’ll winnow the list down to the Top 10 or so, but for now, we’ll list them all!