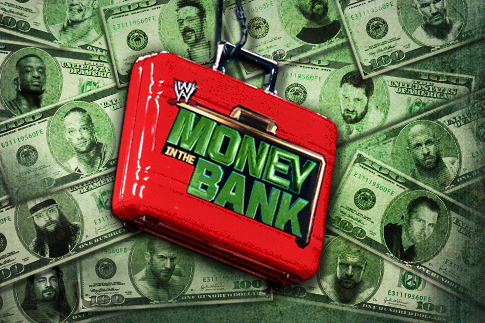 Not a fan of messing with the Wyatt music at this stage of the game.  Jey gets a bodypress on Harper to start, but Jimmy comes in and walks into a dropkick.  The Wyatts quickly work Jimmy over in the corner, but Rowan ventures too far into the Uso territory and gets double-teamed.  To the floor, where Jey gets a dive off the railing and back in with a bodypress for two.  Sadly, Rowen tosses him off the top and into the railing, and Jey is YOUR twin-in-peril.  Rowan tosses him around the ring for two, and Harper cuts off the tag before putting him down with a big boot for two.  Rowan misses a charge and it’s hot tag Jimmy.  Samoan drop for both Wyatts and he hits Harper with a corkscrew dive for two.  Pair of superkicks gets two.  Rowan goes after Jey on the outside and Jimmy hits them with a dive, but Harper clobbers him from behind as a result.  It’s BREAKING LOOSE IN TULSA and Jimmy rolls up Harper for two, but Harper powerbombs him for two.  And now Harper is doing dives, taking out both Usos on the outside.  Back in the ring, things look bleak for Jimmy and a double chokeslam gets two.  Jey makes the save and dumps Harper, but Rowan goes up and gets crotched.  The Usos return with a double superplex and both hit flying splashes to retain at 13:05.  Kind of a surprising result, actually.  Great opener, too.  ***1/2

Meanwhile, Dean Ambrose is unsure whether to win the case or smash Seth’s face in.  He settles on both.

They fight out of the ring on a vicious lockup, but Naomi tosses Paige off the apron by the hair.  She follows with a dive that looked like it might have broken a few ribs.  Back in, that gets two.  Naomi with a flying bodypress that Paige reverses for two.  They trade rollups for two and Naomi rolls her into a submission move, but releases and goes up. And they mess up again and both fall to the floor, as they seem to be grasping past their skill level tonight.  Back in, Paige gets the dreaded STUMP PULLER, but gets nowhere with it.  It’s been well documented that the pain of the hold comes from an erection digging into the neck of the victim, and obviously that wouldn’t apply here.  Naomi with the butt-butt for two, and apparently this is her deadly finisher.  So, bummer for her, I guess.  Paige tries a rollup and gets reversed for two, but comes back with a DDT to retain at 7:05.  So yeah, Paige gets beat up the whole match and wins on a fluke, as usual.  *1/2

Meanwhile, we go to the panel of “experts” for some talking.  The expert picks are Randy Orton and Bray Wyatt, so you can eliminate them from the running.

Sandow’s costume of choice tonight is Paul Revere.  This poor guy.  Sandow attacks in the corner and pounds him on the apron, then goes to the chinlock while the crowd tries to get the theme song going.  Sandow with the Elbow of Disdain and a chinlock while the announcers drift off into some other conversation entirely.  Rose makes the comeback, but walks into a Sandow clothesline and the full nelson slam for two.  Rose finishes with the facelock DDT at 4:17.  I think it’s almost time to give up on both guys.  Clearly the audiences aren’t getting the Rose deal and shoving him out there to die week after week isn’t gonna suddenly get him over.  ½*

Apparently Dean is going minimalist with his new gear by just using jeans and a wifebeater.  Seems apt.  He immediately brawls out with Rollins because they hate each other and that’s awesome.  Kofi immediately starts with the crazy stuff, running up a ladder held by Swagger and then hitting a Boomdrop onto the ladder.  Kofi climbs and Ambrose saves, pushing him into a dive on the other guys.  He’s earned his pay tonight.  The Dean and Seth show continues as they battle over the ladder, which Dean wins via a suplex onto the ladder.  Dolph and Kofi slug it out on the ladder, but then team up to get rid of everyone and go right back to punching each other on the ladder.  Rollins gets rid of them and then it’s time for a sequence with RVD.  Rob with a wacky Rolling Thunder onto the ladder in the corner and he boots Ambrose off the apron and hits the frog splash on Swagger.  Swagger comes back with a ladder to get rid of Kofi, and then sets it up in the corner for a crazy superplex attempt on RVD that goes horribly wrong for him.  Rob looks to follow with a frog splash off the top of the ladder, but Rollins breaks it up and Swagger powerbombs RVD off the ladder instead.  And then Ambrose superplexes Rollins off the ladder because SOMEONE had to.  Swagger cleans house on everyone and hits a Swaggerbomb onto Kofi and the ladder, but RVD prevents him from climbing.  And it’s back to Dean Hates Seth again as they fight on top of the ladder, but Swagger keeps Ambrose from winning.  Rollins climbs and Ambrose stops that as well.  Ambrose apparently dislocates his shoulder and the trainers haul him out of the match, drawing the biggest heel reaction of the night.  So Rollins goes for the case, but now RVD saves, only for Kofi to construct a bridge out of ladders and climb up himself.  Rollins is backdropped onto the horizontal ladder in a terrifying spot, leaving Kofi alone, but Dolph saves out of nowhere and runs wild.  Fameasser for RVD and Zig Zag for Kofi, but Swagger uses the anklelock to keep him from climbing.  But after Dolph fights him off and gets the big hope spot, Rollins saves to rip the fans’ hearts out again.  Rollins climbs, but Ambrose returns and he’s fucking pissed.  He beats the blond out of Seth’s hair with a chair and climbs, ONE ARMED mind you, the babyfacest babyface ever, but Kane runs in and saves.  Tombstone ends Ambrose’s night, and Rollins gets the academic win at 23:14.  Crazy spotfest, but the drama with Rollins and Ambrose at the end was off the charts awesome with the crowd getting played like a fiddle.  ****1/2

Give it to Cody, he’s all in with whatever crazy shit they throw at him.  Also, if you want to hear someone suck the humor and fun out of something most effectively, listen to Michael Cole robotically describing the premise of Slam City here.  Imagine Sheamus as a movie usher!  I’m gonna say no thanks.  The Dusts control Ryback, but Goldust gets clotheslined and Axel pounds away in the corner to take over.  Axel chinlocks Goldust and Ryback gets the spinebuster, but the clothesline misses and it’s hot tag Stardust.  DDT on Ryback and Axel gets dumped, and the Crossroads gets two.  Heels collide and Stardust rolls up Ryback for the pin at 7:40.  *

Tonight, Big E stands up for MURICA.  Why have they not booked Jack Swagger into this feud?  It’s RIGHT THERE.  Big E pounds away on Rusev and tries the spear through the ropes, but Rusev blocks with a knee and starts throwing suplexes.  CLUBBING FOREARMS to the back, but a splash misses and Big E comes back with a belly to belly for two.  Rusev misses a blind charge and E slams him for two.  Overhead suplex and he spears Rusev off the apron, which does not make Lana happy.  Back in, that gets two.  Rusev finally puts him down with a pair of kicks and RUSEV CRUSH at 7:15.  Rusev should not be selling that much until he gets to the house show run against Hulk Hogan.  **

Meanwhile, Brie Bella returns to support her husband, which draws the wrath of Stephanie.

So apparently the storyline is that these chicks are fighting over FANDANGO.  That’s slightly below fighting over shampoo contracts in my book.  I’d call this the death slot, but everything after the first ladder match has pretty much been death.  Summer Rae with the Nash choke in the corner, but Layla takes her down for two.  So out of curiosity, who am I supposed to be cheering for here?  Because Summer is clearly a heel and so is the Layla/Fandango pairing.  Layla works an indian deathlock, but Summer throws her around as this dies a thousand deaths before our eyes.  Layla finishes with a high kick at 3:00.  So her prize is that she gets to be with Fandango.  Lucky her.  DUD

Big slugfest to start and Reigns is the first one to clear the ring and climb, with Sheamus making the save.  They have a ladder fight and both climb, which sets up Kane to dump everyone off.  This allows Orton to climb with the help of Kane, but Reigns saves.  Cesaro puts Cena out with the uppercut, and slugs it out with Sheamus on the ladder, but Wyatt steals the ladder and they’re left hanging onto the belts.  Neither can capitalize and Orton is bleeding all over the ring from a ladder to the head.  Orton and Sheamus fight on the floor and we get the draping DDT off a ladder as this thing kind of grinds to a halt.  Everyone fights over the ladder and tries to climb, but Kane clears the ring.  Sheamus goes on a tear next with his sixteen finishers and the crowd isn’t buying any of it.  Honestly this has felt like 15 minutes of filler thus far while we wait and wait and wait for Roman Reigns to get his big spots.  Sheamus and Cesaro fight on top again, giving us a weird and dangerous spot where Reigns pushes the ladder over and then Cena pushes it back again.  So again Orton and Kane clear the ring, but Reigns hits Orton with the Superman punch and goes on his run.  So we’re left with Reigns and Cena slugging it out until Reigns gets the spear.  Orton takes him out and climbs, but Bray Wyatt finally makes an appearance in the match and saves.  Del Rio gets his hope spot, saved by Sheamus, and Cesaro takes HIM out, only for Orton to RKO him off the ladder.  Reigns slugs Orton off the ladder, but Kane saves and Orton is a bloody mess again.  Cena hits them both with FUs and wins the WWE title at 26:30.  Say it with me:  Cena wins, LOL.  This was a huge disappointment, with all the new faces basically treated like a complete afterthought.  ***  And really, one FU on Orton and he wins the belt and gets anointed as GREATEST WWE CHAMPION EVER by Michael Cole?  Come on now.

Considering how hard they were pushing the Network for people who ordered the show tonight, you should probably subscribe now before PPV drops them completely, as is inevitable.  As a $10/month free show, this was an easy thumbs up for the briefcase match alone, but man what a letdown from the past three years.  The Daniel Bryan injury has really sucked all the life out of the promotion, sadly.  I take solace in pointing out that I predicted both wins in my Sporting News columns, though.