One thing we at Place to Be Nation like to celebrate is the subjectivity inherent in entertainment — be it in wrestling, comics, music, television or, indeed, film. With that in mind, ten members of the PTBN staff will be picking the movies of the PTB generation.  In this series, panel members will collect their five favorite films of each year, beginning with the year in which the oldest writer was born — 1976. The only rule given to each contributor was to provide his or her own criteria. Some writers may go with the most artistic films, while others might side with the most iconic blockbusters. We welcome your lists on Facebook and Twitter. Each staff member has submitted a list of five movies from 1985 ranked 1 through 5. A first-place vote is worth five points, a second-place vote worth four points, and so on. Using that point system, we have identified the top 5 movies of 1985.

1985 was another year of parity, as 21 different films received votes. That enabled one film to run away with the No. 1 spot, but made the race to make the final list very tight. But before we reveal the top 5, let’s see the movies that received votes, but fell short of making our final list.

Kiss of the Spider Woman — 1 point

The Purple Rose of Cairo — 1 point 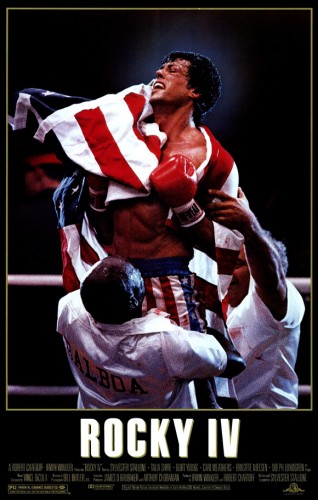 Aaron George: It feels like just last week I was waxing poetic about men punching each other in the face, Hulk Hogan, Mr. T and runs on the beach. Now Sylvester Stallone must face his biggest challenge: filling 90 minutes of cinema.

The first thing I think of when I think of Rocky IV (aside from how amazing it is) is that it’s possibly the laziest movie ever made. Not only are we treated to the usual brigade of training montages, but we get a montage midway through the film where we recap the past three Rocky movies. And yes it was to the awesome “No Easy Way Out” but that doesn’t mask the fact that Stallone filmed 85 minutes of footage and realized “this will not do.”

So why do I love the slothiest of films? Birthday robots? Maybe. Apollo getting exactly what he deserved? Probably. Boxers who have no idea of the concept of defense? Absolutely! I guess when you get right down to it, I love punching communism in its big red face and that’s exactly what Rocky does for 75 minutes.

Ivan Drago is a great villain who doesn’t give a shit. “I must break you,” and “If he dies, he dies” are two of the scariest things I ever heard as a child. I’m not sure why the writers felt the need to kill off Mr. Creed after that six minute dance choreography (more filler) but they did and it gives the movie a pretty good revenge quality that only adds to the epic 44 minute fight at the climax. (I know… but it felt that long)

I’d be remiss if I didn’t mention the awesome music. Vince DiCola (with the help of Bill Conti’s classic theme) does a great job at creating a score which is at the same time as cheesy as it is exhilarating. When that “training montage” (actual title) comes on my iPod I can bench like 50-60 pounds, and the “War” piece which colors the fight with Drago lives up to the epic scale of the fight it’s scoring. While we do lose “Eye of The Tiger”, Survivor is back with the pretty underrated “Burning Heart”, and the aforementioned “No Easy Way Out” rounds out what is a pretty solid soundtrack.

So how can I justify ranking this higher than Back to the Future? I guess because it’s Rocky and it’s awesome. Besides, Rocky ends the Cold War. What does Marty McFly do? Bang his mom? Think about it. Because If I can change, then you can change… 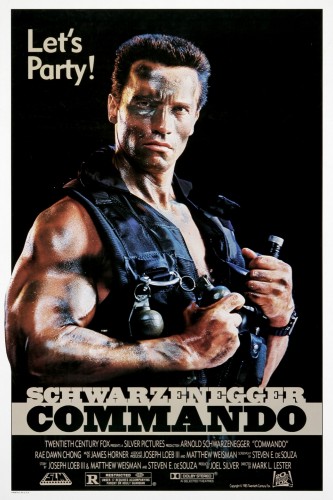 Greg Phillips: Ah, Commando. I could write a novel about this movie and how much I love it. As an action aficionado, this movie is something of a holy grail, an example of the perfect tongue-in-cheek straight-ahead action flick. 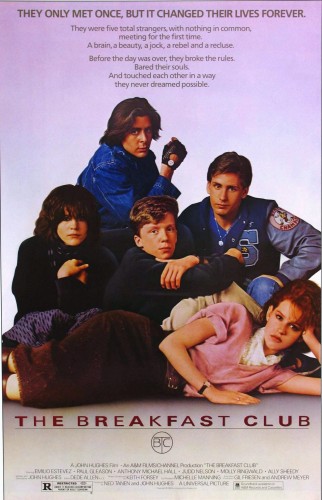 Steve Wille: Teenage coming-of-age movies became a popular genre in the 1980’s, and no one had as much success in this area as writer/director/producer John Hughes. In fact, in my mind, Hughes is one of the few artists whose films may be a genre onto themselves.

In perhaps his most famous work, The Breakfast Club, a group of teenagers from different walks of life finds common ground during a detention session. Unlike many of its box office peers at the time, the plot occurs without traditional action sequences, but through witty dialogue and dramatic interpersonal scenes. The cast of teenagers, part of the infamous “Brat Pack” included red-headed crush Molly Ringwald, Judd Nelson, Anthony Michael Hall, Emilio Estevez, and Ally Sheedy. From what my wife tells me, every girl from the 80’s and 90’s wanted to make out with the “dirty bruiser” in the hallway, and Ringwald gets to do just that, kissing Nelson’s rebellious character, John Bender in a supply cabinet.

The ending sequence, poignant and iconic in itself, shows Bender leaving detention, returning his earring to its proper place, triumphantly putting his fist in the air as Simple Minds’ classic song “Don’t You Forget About Me” plays the movie out. 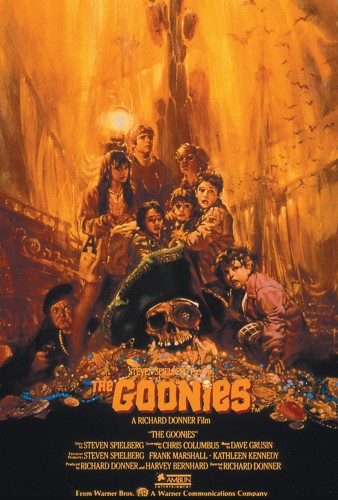 Anthony Estrada: To this day, there are rumors of a Goonies sequel. Think about that – there is still interest in a follow-up to a thirty-year old movie about seventh-graders hunting treasure in the sewers. That blows my mind. In 114 minutes, one is exposed to a world so detailed, so resonant and so exciting we not only want to revisit it again and again, we want to be told more stories about it.

I can lovingly list names and scenes from The Goonies the way Chunk reads ice cream flavors from the freezer in the Fratelli’s basement. Space doesn’t permit me to do so with justice. But I can describe the impact this movie had on me. I was a shy kid who liked to escape into books, movies and TV. I wanted my life to be an adventure filled with big stakes, important choices, (relative) danger and loyal friends. The Goonies provided all of that.

The movie follows a group of friends, all different, all undesirable in some way, on the brink of losing one another unless something can stop the imminent foreclosure of their homes. They take action – it begins as a game of make-believe to kill a rainy afternoon. They’re quickly in over their heads, literally running for their lives and, just possibly, on the trail to an actual, no-kidding, honest-to-goodness pirate treasure.

I knew these characters. My brother, cousin and I ran around the backyard pretending to be them. Over the years, I spent well over 114 minutes engaging with Mikey, Mouth, Chunk, Data and the rest of the crew. I’m excited to share it with my daughter when she’s old enough for it. And fortunately, I don’t need a sequel to make that happen. 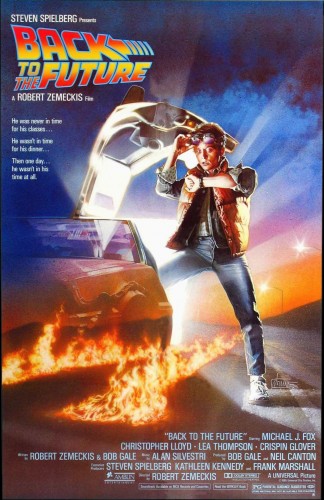 1. Back to the Future

Nick Duke: It’s hard to come up with things to say about Back to the Future that aren’t completely obvious. The movie has ingrained itself so deeply in pop culture that practically everyone knows Marty McFly, Doc Brown and the Delorean time machine. But how exactly did that happen?

It happened because in 1985, we were treated to one of the most entertaining and fun movies that has ever been made. The movie doesn’t take itself too seriously, but manages to make the audience actually care about the struggle of Marty and Doc to send the Delorean back to 1985. Along the way, we get some rather creepy moments between Marty, played by Michael J. Fox in a career-defining role, and a younger version of his mother, played by Lea Thompson. We’re also introduced to Marty’s awkward, yet endearing father George McFly, who is brought to life in all his nerdy glory by Crispin Glover. But my favorite character in the movie is its antagonist – Biff Tannen.

Biff is an idiotic meathead in every sense of the word and doesn’t really bring anything new to the table in terms of stereotypical bullies. But, he is entertaining as hell, whether it’s the 50s jerk version, the 80s jerk version or the reformed 80s version from the end of the movie.

But no matter what your favorite aspect of the movie is, it’s impossible to debate its iconic status. “Where we’re going, we don’t need roads…”