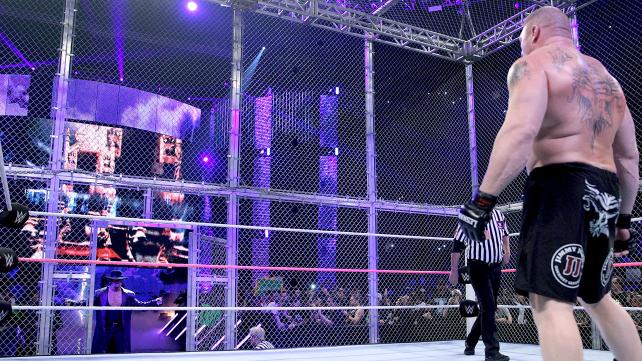 Man, they REALLY must be desperate for ratings if they actually talked Del Rio into coming back. And with Zeb Colter as a manager now. Well, this completely contradicts that Daniel Bryan theory. Pretty subdued reaction for ADR, who as at least looking pretty ripped tonight. Now if he immediately goes back to boring old Alberto, this will be a waste. Actually, they should watch Narcos on Netflix and rip off Pablo Escobar as a character, because that would be a far more interesting direction for Del Rio. Del Rio goes after the leg and then works on the arm, and a backbreaker gets two. Double axehandle gets two and we hit the chinlock. Cena goes up and ADR brings him down with enzuigiri for two. Another double axehandle gets two. Del Rio preps for the armbar, but Cena puts him down with a clothesline and makes the comeback. Del Rio counters the FU into a backstabber and low kick that gets the pin and the title at 7:45. Pretty disappointing return match, as they seemed to be on totally different planets and the crowd wasn’t into it. **

Meanwhile, Corporate Kane cheerfully interrupts a Seth Rollins meeting with the Authority, and HHH informs him that it’s a private meeting. Except for the cameraman standing there.

The announcing here is hilarious from the start, with JBL trying to put over the Cell by noting that there’s nowhere to run or escape, when in fact the most famous spots in the history of the match involve people escaping the cage. Reigns beats him down for a bit, but Bray runs away in the match where you’re supposedly unable to run away. Bray finds a kendo stick to take over and pounds away while Roman sells, which is a sure-fire way to get him over as a badass main eventer. Next up, Bray wedges a chair into the cage, but that backfires on him. And now Roman finds a pair of kendo sticks from the magic ether under the ring, and a pair of tables as well. And that backfires on HIM, as Bray slams him off the apron and through the table. Well maybe if he didn’t take 10 minutes to set up the tables. Back in, that gets two. They head to the floor again and Bray splashes him into the cage as we get a new one: A “Let’s go Roman / Roman Sucks” chant from the crowd. Bray finds yet another table under the ring and they fight on the top rope, which results in Roman giving him a powerbomb through the table. Which gets two. Some guy tries a “this is awesome” chant and no one is buying while they lay around trying to build heat or sympathy or SOMETHING. Sister Abigail is reversed into a rollup for two, and the superman punch gets two. They head to the apron for another slugfest and Reigns spears him through the table to finally pay that one off, and that only gets two. He takes forever to set up for the finish and Bray catches him with Sister Abigail for two. Reigns uses the kendo sticks to come back again, however, and the spear finishes at 23:05. So a POWERBOMB THROUGH A TABLE is only a near-fall, but a simple spear gets the pin? Fuck this match. Dull and slow-paced with about 5 minutes of spots stretched out to over 20 minutes, but they worked hard. My biggest beef is that instead of a buildup to a climax, it was big move-lay around-lay around-lay around-big move-lay around-lay around-finish. ***

Sadly, Xavier Woods is not here tonight due to the Dudley Boyz, so there will be no tromboning. They will, however, play congo drums on Bubba’s belly like a “Caucasian Kamala”. Bubba quickly slams Kofi off the top and the New Day retreats for some unicorn strategy. Back in, the Dudleyz badly mess up a double-team on Kofi and even the announcers concede that it was ugly. Big E pounds on D-Von in the corner and immediately 50% of the New Day’s charm is lost without Xavier out there running his mouth. Big E with a splash on D-Von for two. New Day tries their own Wazzup, but D-Von fights them off and makes the hot (ish) tag to Bubba. The Dudleyz hit their Wazzup on Big E, but Kofi throws the trombone at Bubba and does the old Eddie Guerrero sell, but the ref doesn’t buy into it. The neckbreaker gets two on Kofi after his tantrum, but Big E lays out Bubba with the trombone and the big kick finishes him at 8:24. OK, time to send the Dudleyz back to TNA now, it was cute for a week or two but enough is enough. **1/4 Three in a row where the crowd was totally dead for the match.

I don’t see this one helping out the crowd situation any. Charlotte pounds away on Nikki to start, but a forearm puts her on the floor. They brawl for a bit out there and Nikki gets two in the ring. The crowd is so jazzed that they chant for Sasha Banks. Nikki with a suplex for two and a backslide for two, and she goes to a half-crab. A catapult into the ropes gets two. Spinebuster gets two, but Charlotte comes back with chops in the corner and a neckbreaker for two. They go up for a superplex attempt and nearly kill each other coming down with some sort of messed up reversal, and Charlotte gets the figure-four, but Nikki quickly makes the ropes. They head to the floor and Nikki necksnaps her into the apron, but Charlotte gets the figure-eight in the ring to finish at 10:40. What was the point of the finishing sequence? Why not just have the first figure-four end it? I don’t know why they sucked all the personality out of Charlotte between NXT and here, but I wish they’d just put the title on Sasha already. **1/2 Paige and Becky come out to celebrate, because apparently they STILL haven’t broken up this team yet.

The video package that attempts to turn this ridiculous storyline into something we should care about is something to behold. Not in the sense that it works, but in the sense that they just take all the same clips and present them again as if to say we should buy into it THIS TIME. Kane quickly tosses Seth and preps the tables, but Rollins runs away a bunch and gets a cheapshot to take over. Seth chokes him out on the ropes and a neckbreaker gets two. He gets the heat on Kane, which leads to the fundamental problem with this stupid Kane character, as he’s this indestructible superhero until it’s time for the match, at which point he becomes just another wrestler in the ring doing a match. Rollins pounds away in the corner and dropkicks the knee to cut off a comeback while JBL notes that Seth has “defeated all comers” and may be on his way to being one of the greatest of all time. He’s only won a couple of matches since July! He’s defeated almost no comers! That’s the whole problem. They fight to the top and Kane comes down with the flying clothesline, and the chokeslam gets two. Seth escapes the chokeslam and they fight on the floor, with Rollins again trying to run away like a huge coward. Kane tries to chokeslam him through the table, but Seth counters to a powerbomb that fails to break the table. Luckily for us, Kane beats the count. Rollins with the flying knee to put him down and a frog splash for two. And then Kane just no-sells and pops up, so Seth hits the Pedigree to retain at 14:35. Seth is a miracle worker under normal circumstances, but there’s only so much you can do with Kane. **1/4 So now Kane is fired as authority figure. I know, I’m shaken up too. On the bright side, at least the feud appears to be done with.

Ryback pounds on him in the corner to start and gets a delayed suplex, as Cole tells a story about Owens DISRESPECTING a Magic Johnson statue by telling us that he doesn’t believe in magic, he believes in himself. That actually sounds like a pretty positive message for kids. Does anyone today really know Magic Johnson as anything more than a vague former basketball player anyway? Ryback slugs away in the corner, but Owens takes him down with the senton for two. Ryback with a spinebuster and powerbomb for two, but Owens kicks him to the floor again and the crowd continues to be completely dead. Back in, Owens with a rollup for two, but Ryback counters the powerbomb with a lariat. Owens grabs the ropes to escape the Shellshock, rakes the eyes AGAIN, and finishes with the powerbomb at 5:38 to retain. Just a normal TV match that felt incredibly rushed on PPV. *1/2 I mean, to be fair, they had to cut SOMETHING down to make room for all the replays, commercials, video packages, and panel discussions.

They throw down in the corner to start and head to the floor, but Taker escapes an F5 and Brock is suddenly gushing blood from his forehead. Well thank god. The replay shows Brock didn’t even try to disguise the blade. Back in, Brock takes him down with a spinebuster and destroys him with a chair, then tosses him and just levels him with a sick chairshot IN THE FACE. The gloves are off (not the referee’s, because there’s blood), but Taker suplexes him on the floor and now he’s also bleeding from a conspicuous place on the forehead. Back in the ring, he runs Brock’s throat into a chair and pounds on the cut with elbows, but that only wakes up the bear and it’s SUPLEX CITY. F5 gets two. And now the stupid doctor wants to check on the cuts, so Brock PUNKS HIM OUT and hits Undertaker with another F5 for two. I’m sure CM Punk was cheering that one. Serves him right for trying to uphold the Hippocratic oath, that jerk. Brock grabs the stairs and rams those into his face, but Taker kicks them back at him. Gogoplata follows, but Brock escapes and pulls up the canvas to reveal the bare wood. That one backfires and Taker chokeslams him on the boards, then adds a tombstone that only gets two. Our Viking Space Lord lives! Brock gives him an epic ballshot and adds an F5 on the boards to finish at 18:07. Finally a PG-era Cell match that lives up to the carnage promised. ****1/2

And then Undertaker’s round of applause is RUINED by the Wyatt Family coming out and beating him up 4-on-1, with no one bothering to save him. And they carry him to the back to end the show. JBL is very offended.

Hey, there’s actually a direction for Survivor Series already with Team Undertaker v. Team Wyatt! That’s a better track record than the Rematch-A-Mania we usually get.

Great main event with a mostly forgettable undercard, but nothing I’d call really bad, outside of the really disappointing Cena-Del Rio opener. Thumbs mildly up.