Last week on the Caliber Winfield Super Terrific Happy Hour, I harkened back to the genesis of my wrestling fandom. We left off at the dawn of what I consider to be the greatest wrestling angle of all time. 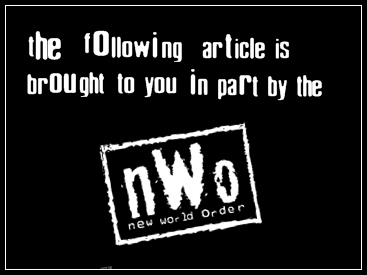 I was watching Nitro in my bedroom on that fateful day, when all of a sudden there he was; Razor Ramon. I raced out to the living room to switch the TV over and show my mom what was going on. I couldn’t believe it. He was here to start a war! The Ross Line was wrong, he was still part of the WWF! See, I was still in that mode where you could tell things weren’t on the up and up, but you WANTED to believe, and in some cases thought like Russo eventually wanted everyone too, that you knew everything else was planned, but this, THIS was real.

Well, that’s what I thought. I thought the WWF was here to crush WCW. My dreams had come true. Oh my God! It’s Big Daddy Cool! He’s here too! They’ve got a 3rd guy?! Oh man, who could it be?! It better not be someone lame, like Shawn Michaels. It better be someone with a cool finisher! I tuned into The American Bash, scrambled, and holy shit, I thought what they did to Bischoff was the greatest thing of all time. You’d never seen ANYTHING like this. Up till this point, the only thing that ever came close was when Roddy Piper accidentally hit Vince with a chair while he was doing commentary & Ric Flair came out to provoke him. I tuned into Nitro with a fever. I had to see what The Outsiders were going to do next, and maybe they’d say who the 3rd man was. Well, eventually the day came; Bash at the Beach. Again, it was scramblevision in my room, and I didn’t miss a second. The second Hogan walked out, I knew. I KNEW. I mean, HE WAS THE WWF! I ran around my room like a fucking lunatic. You ever see Friday The 13th: The Final Chapter? That scene where Corey Feldman flips out over seeing boobies. Yeah, that was me.

The following Nitro’s soon showed that it wasn’t the WWF, but instead The New World Order. My mom questioned as to why WCW wouldn’t just have them arrested, but I put her smack-dab in her place.

“Duh, mom, they bring ratings! Everyone wants the nWo! So even though they’re getting beat up, they need the nWo!”
“What about money? WCW clearly isn’t paying them.”
“Money? MONEY? Mom, c’mon, have you ever heard of Billionaire Ted DiBiase?! He’s funding the whole deal! They’re loaded!”

I thought the nWo was the coolest thing in the entire World. The most exciting thing was seeing who’d join next. I loved it when there was a turn; like The Giant on the Dungeon of Doom, or Buff on Scotty Riggs. The t-shirts were outstanding, and they had the coolest ring entrance music ever. This was even better than if The Outsiders had stayed in the WWF.

While the nWo was the greatest thing ever, I still watched every piece of WWF programming that there was. One show was a Saturday morning program known as Livewire. It was live, featured calls, letters, emails & faxes from fans, along with matches & clips. One phone call came from a guy wanting to know if the WWF was afraid that Hollywood Hogan & The nWo were going to take-over. Todd wasn’t happy at this question and quickly dismissed it. No, it’d be a while before I saw the nWo in the WWE.

However, while watching Raw I was blown the fuck away when I heard JR announce that Razor Ramon & Scott Hall were coming back to the WWF. I wasn’t sure what to expect. Would they be nWo? Would they be bringing the rest of the group along? This is so damn excit–…wait…what the hell? What is this crap? First they’d shown Razor beating up Savio Vega, from a distance, on a PPV, then they kept showing Razor & D from the back, or at a distance on the following Raw. I’d tuned in with such excitement, and I can’t tell you how pissed I was when I saw Razor beating on Vega. It was clearly not my boy. I had no idea what the fuck was going on. But I was insanely pissed when I was proven right later on during Raw. This wasn’t Diesel! This was clearly Jerry Lawler’s dentist who’d apparently fallen on bad-times and had to attend Kevin Nash’s Big Daddy Cool College in where you’re trained in the art, and attend birthday parties and such in order to make some spare cash.

Over in WCW, the nWo was continuing to amaze me. I loved the commercials, and still think they’re some of the best segments in wrestling history, I loved the black & white matches they had, the spray-painting, the beat-downs, it was fantastic. What really brought it all to a zenith was Sting. I thought all of that was out of this World cool. They did so many great things with him that were just ridiculous & awesome. For months no one knew which side Sting was on, until Uncensored 1997 when he made it known he was WCW. The pop was absolutely nuclear.

Everyone knows that Sting’s big deal was coming from the rafters, which had never been done before and was incredible. At one point they did this awesome bit where it appeared Sting had come from the rafters, but didn’t stop soon enough and crashed into the ground. Of course, it turned out to be a dummy. Later that night, the nWo did the same thing again, but this time the dummy went through the ring. When they pulled the dummy out, it all of a sudden sprang to life and beat the shit out of the nWo, revealing that it wasn’t a dummy, but Sting. He also had the most devastating finisher in history; The Scorpion Death Drop. Seriously, back then I thought it was DEATH for anyone who got hit with it. They got that move over like absolute crazy. The way he’d pull the persons hair, and then look at them for a second like “You forced me to do this”. Great stuff. 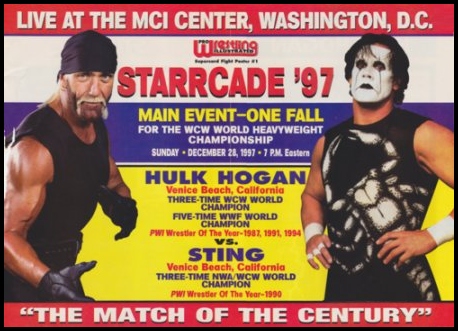 It had all built to this. This post came in a special issue of Pro-Wrestling Illustrated that was all about the feud. I bought that sucker in a hot minute and had this up on my wall. I couldn’t wait. I was salivating at the thought of it.

During the time that I was a wrestling fan & WCW was around, which was 1995-2001, I only purchased one WCW PPV. Of course, it was Starrcade 1997. There was no fucking way I was going to miss this match. They’re going to absolutely destroy each other! It’s going to be the best match ev—…goddammit. Although I wasn’t truly at the point yet where match quality was a huge factor for me, the awfulness of this match is really hard to miss. I mean, this was Sting. STING. He’d literally been defeating the entire nWo with his bare hands for almost 2  years. Then what happens? He gets the SHIT kicked out of him the entire match, and he even gets PINNED! HE GETS PINNED! There was no fast count, there was no funny business. He fucking lost! It was disappointing, but I was still on a high from the angle, and actually seeing the match live. I saw a trailer for a Nick Patrick shoot DVD, and the guy asked him about what the deal was with Starrcade 1997, and he acted like he had no idea what he was talking about. Easily the biggest match of Nick’s reffing career, and all he says is “I have no idea. I’ve reffed a lot of matches”. Geez, did Hogan pay you that much?

After that, my love for the nWo diminished some what. However, it was brought back with the Wolfpac. I thought the red & black looked fantastic, and it was an elite team. No more Vincent & VK Wallstreet bullshit. They had arguably the greatest theme song in wrestling history, and I felt it brought a level of freshness to the group. It eventually died out again, and while I was stoked to see the Fingerpoke of Doom, and that the nWo was back together again, the WWE was just offering way too much goodness for me to care about the nWo, and Hulk Hogan walking around looking like the Heavyweight Champion of Sexual Assault. 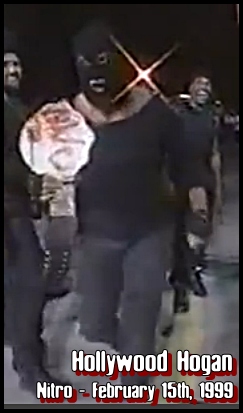 When the nWo was brought back in 2002, I was pretty excited. It was short-lived, poorly executed, and didn’t last very long, but I ended up seeing Hogan in the red & yellow, live, at WrestleMania 19 as a result of it, so in the end I wasn’t too upset. Around that time I started kicking myself for never recording the Nitro’s when I was younger, so I could watch all the classic nWo bits. Thankfully once YouTube came around, I no longer want for nothing.

Guaranteed Money is something I’ll occasionally do that highlights something I was witness to and struggled to imagine grown adults discussing it and going “bullseye!”. This week’s entry comes from TNA during the year of 2006.

A few weeks prior, The James Gang, which consisted of BG & Kip James, had quit TNA Wrestling. Of course, The James Gang is better known as The Road Dogg Jesse James & Bad Ass Billy Gun, The New Age Outlaws. Well, once they hit TNA they tried to get the magic back, but The James Gang was so proficient at the suck that it wasn’t gonna happen. Over in the WWE, Shawn & Hunter had reformed DX. Well, The Gang took offense to this, and as you’ll see here, decided to declare war. Later one, I remember watching an iMPACT and during the entire episode you saw them running around New York looking for “The Target”. As the show drew to a close, they found it. However, Kip had mistaken BG talking about “the Target” as wanting to find a Target store. But a quick camera pan to the right showed their real target; Titan Headquarters. What the fuck was the point of this? Look, we get it Russo, DX invading WCW was a great bit, but Voodoo-Kin Mafia? VKM? Dying Kip’s hair red? Using Shawn & Hunter’s real names on TV? This was so fucking lame. Were they going to ring Vince’s door-bell & run? Were they gonna fart on his food or something? What the hell was the point of all this and who thought there was ANY chance of anything interesting happening? Yeesh.

Alright, that’s it for me this week. Get all the more Caliber you can handle at;Str8 Gangster, No Chaser
caliberw@placetobenation.com
@Caliberwinfield
facebook.com/str8gangster

Also, do yourself a favor and check out Jeremy’s House of Horror reviews here at the Nation. They’re concise reviews, and I think one of the highlights of the website. Although I do disagree and think that Texas Chainsaw 2 is a decent film.