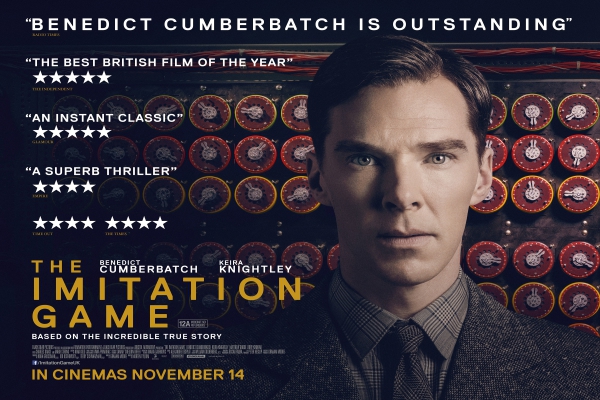 It seems as though the last two years have been about changing my opinion of actors. 2013 saw me do a complete 180 on the biggest rom-com star of the 2000s when he was “alright, alright, alright” in Dallas Buyers Club. This year, it’s Benedict Cumberbatch. Why did I dislike him? I’ll get to that.

In World War II, Alan Turing worked towards the war effort in trying to crack Germany’s secret Enigma code. He struggles against the constant pressure to get the job done, and also to conceal his homosexuality, which was illegal in England at the time.

There have been (no exaggeration) hundreds of movies about World War II. Some great, some awful, some starring Nicolas Cage. Saving Private Ryan seems to have set the bar on which all of them are measured. That being said, I always enjoy a new take on the war. So riddle me this: What do you call a war movie without a war in it? New.

The war isn’t so much the focus of our attention as Alan Turing’s life is, but it makes for a highly compelling backdrop and plot device. Turing’s story long hadn’t been told, but like Argo before it, it presents us with a tale that had been right under our eyes, and makes us look at history in a new light. It’s full of pent up aggression, and enough humor to make it a fully rounded film. Yet it isn’t really the story that sells this movie, it’s the acting.

Benedict Cumberbatch. I never thought that he was a bad actor. It was more me tiring of everyone telling me how great he was. There has been debate over who portrays the better Sherlock Holmes between him and Robert Downey Jr. Yet slowly, the man has captured my attention with supporting roles full of a chilling yet compelling presence. This is his best one yet. In a way, his character seems like a British Sheldon Cooper, but infinitely less annoying. Benedict is confident in himself and performs his character with a state of mental preparedness that does not overwhelm. He’s strong in his decisions, he has magnificent nuances, and steals all of his scenes.

Keira Knightley shines as well. Her Joan Clarke does not go in expected directions, and plays her cards without showing her hand. She’s sweet yet powerful. She is steam full of what it takes to fill a strong female role.

Charles Dance gives us more of what made him so fierce and domineering as Tywin Lannister. Perfect to play the role of a man whose authority refuses to be undermined.

I always love Mark Strong. He is devious, smart, and full of that British Charm that totally sold me on him 6 years ago in Sherlock Holmes. (Not getting into that.) I will see anything with Mark Strong in it. He’s probably the only reason I ever tried Miller Fortune.

The Imitation Game is full of fantastic acting, tells a brilliant story, and has a great blend of drama and humor. It’s worth your time.