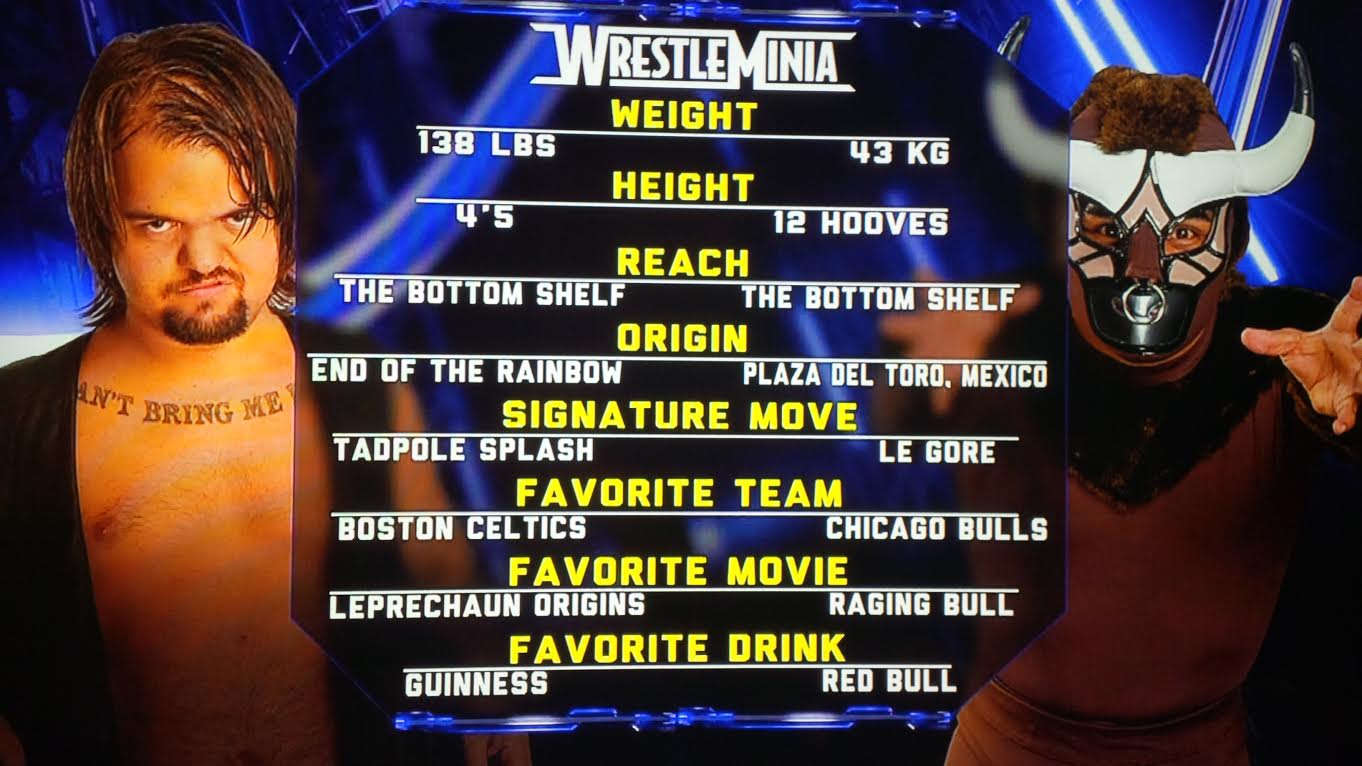 Steve: Glenn, could there be a Money in the Piggy Bank? Max Mini on a pole? For some reason, perhaps because I’m getting caught up in some friends’ excitement, I’m looking forward to this match. I watched the first two matches in the series, and there wasn’t anything blatantly offensive, outside of Michael Cole’s fake laughter and snorting. On this week’s PTBN’s Main Event, special guest Will from Wrestling with the Past (and host of PTBN’s PPV Reaction shows) talked a bit about El Torito’s history as Mascarita Dorada, a prominent, well-schooled mini out of Mexico. I’m also familiar with Hornswoggle’s history before entering the WWE, and he’s well-known throughout the Midwest for his series of ladder matches. Their combined efforts and skills could lead to a fun comedy match on the pre-show, or it could be an utter train wreck, which would be just as entertaining.

THIS JUST IN: Managing Editor of Place to Be Network and agent to the stars, Brad Woodling has sent the High Spot the following report: “Midget wrestler Short Sleeve Sampson will be appearing at this Sunday’s Extreme Rules event. He will most likely play a part in the ‘WeeLC’ match between El Torito and Hornswoggle” (credit: wrestlechat.net). Could this be a reboot of the mini’s division? If so, will Hornswoggle hit the gym? Can they find two more minis to form a basketball team to challenge Scott and Justin?

Finally, there’s a very important factoid that needs to be stressed. The WWE has a tradition of TLC matches going back over a decade. This is a weeLC match. In a TLC match, the T stands for tables. And, you see, T rhymes with wee. And wee is a word meaning little or tiny. BECAUSE THEY’RE SMALL PEOPLE, GET IT? WEE? No word to whether wee also stands for urine in regards to this bout, or if Will will take this paragraph seriously.

Glenn: Your keen sense of wordplay leaves me breathless yet again, Steve. Are you sure you’re not a literature professor?

Indeed, we’re finally getting another high-profile match featuring Hornswoggle, one of the most consistently entertaining wrestlers of the past eight years, and a man whose Cruiserweight Championship reign is not only the longest by far in that title’s history, but will in less than one year eclipse Bruno Sammartino’s first WWWF Championship reign. The diminutive grappler, formerly known as Hornswoggle McMahon, has many career highlights, but this may be the biggest match he’s had since his reign atop the Cruiserweight division in 2007, and it has the potential to be the most entertaining since his appearance in the 2011 Royal Rumble — or, alternatively, the 2008 mini Royal Rumble. His feud with Chavo Guerrero, which raged for years, provided some nice thrills and spills but petered out after it had come to envelop the Titus O’Neil-Darren Young rivalry on NXT Redemption, a show only I watched and only I remember. Still, any time you get to see a Tadpole Splash is a good time to be alive.

The exact rules of the bout have not been announced as of yet, but if there is any justice in this empty hole we call a universe, let alone the one we call the WWE Universe, it will be a ladder match. What will be hung high aloft, six feet above the mat, remains to be seen.

His opponent in this showdown, El Torito, has a far shorter career in WWE thus far, but has done much to impress in that time. While his appearance in the Royal Rumble does not match Hornswoggle’s turn in 2011, it does compare favorably with Hornswoggle’s Rumble appearance in 2008, and Torito’s antics with Los Matadores give him a leg up over Hornswoggle’s current run with 3MB. El Torito has also provided Hornswoggle with the first fellow little person he’s faced in singles competition since his matches with Little Boogeyman in 2006.

Now, let’s hit a couple more points from Professor Wille before running through other news of the week:

High Spot Addendum: Last week in the High Spot, we looked at the upcoming Impact Wrestling cards in Wisconsin and questioned their roster for the events. Since then, they have added both Kurt Angle and EC3 to the main event, making it a tag team match of Angle/MVP vs. Magnus/EC3. Though the presence of Angle is a welcome addition, you have to wonder why they would wait until a week before show time to announce perhaps their biggest draw.

CHIKARA Update: As documented in these pages, the merry month of May sees the return of family-favorite Chikara to the wrestling landscape. Though the first formal event launches on May 25th, this weekend marks the debut of the feature film “The Ashes of Chikara” created by Mike Quackenbush and company. It promises to tell more of the back story of what occurred to the Chikara characters between Aniversario: Never Compromise and National Pro Wrestling Day. Two days earlier, the offshoot promotion Wrestling is Fun! continues this year’s edition of the Tag World Grand Prix.

And how could you have a Chikara event without the infamous Chikara Event Center? Its return is right here.  (thanks to Chikara superfan @ChikaraSpecial).