I love the movie Wreck-It Ralph. I tend to describe it as a mixture between Who Framed Roger Rabbit? and Toy Story for video games. I love it because it’s clear that the creators loved it, too, and took their responsibilities seriously. It would’ve been easy to hammer out a movie of lesser quality and rely on the names of the cameo characters to sell tickets, but they didn’t. They made a great story, and they made great characters for that story instead of using the pre-existing characters as a crutch.

In particular, they did an amazing job with dual-layering the background of Sgt. Calhoun, the Hero’s Duty character.

In many ways, Calhoun was designed specifically to parody the way protagonists in first-person shooters are typically written. This is highlighted by the way her past is described to Fix-It Felix. When Felix asks if she’s always so intense, Kohut replies that, “She’s programmed with the most tragic backstory ever.” The note that it’s the way she’s programmed, rather than describing it as an actual experience, gives the scene an additional sense of artificiality when it’s presented to the audience. The flashback comes off in a “same old story” sort of way, as a protagonist’s significant other having been killed by the given enemy is an oft-used element for making video game characters dark and edgey, especially in FPSes.

And in some ways, that’s the genius of having used it in this movie. It masks the real tragedy that happens right in front of our eyes.

Hero’s Duty, the game from which Sgt. Calhoun hails, is centered around destroying cybugs: Creatures resulting from an experiment gone awry. The reason for Sgt. Calhoun’s intensity is that her fiancé was killed by a cybug — not only on the day of her wedding, but during the ceremony itself.

The bug crashed in through the stained-glass window and swallowed her fiancé in one gulp, whereupon Calhoun screamed and whipped out a machine gun to blast the hell out of it in a fit of vengeance. According to Kohut, the reason this incident happened at all was because Calhoun had failed to do a security check prior to the ceremony.

Cybugs, for all intents and purposes, are the perfect biological weapon. They reproduce rapidly and can incorporate anything that they ingest as weapons. This makes them notoriously difficult to wipe out, which is illustrated to the audience as soon as the Hero’s Duty sequence begins. Ralph’s fluster and subsequent panic at the situation only heightens the chaos and further conveys the frenzied nature of the game.

Cybugs would be a problem due to their sheer numbers alone, but they’re even more dangerous because they aren’t aware that they’re part of a video game, and it appears that Hero’s Duty never actually resets. When the play session is over, a beacon is used to draw in the swarm and bug-zapper them out of existence. What happens in Hero’s Duty stays in Hero’s Duty, and this is what prevents the cybugs from completely destroying the game itself.

However, this is also the reason why Calhoun’s background is a lot darker than the cliché we’re presented with would lead us to believe.

The audience is repeatedly shown that cybugs really will assimilate anything that they consume: Guns, candy, signs, structures… Even people. Toward the end of the movie, King Candy falls behind Vanellope in the Sugar Rush character selection race, and in his zeal to catch up to her, he ends up driving straight into a cybug’s mouth. This was assumed to be his end, but a short time later he reappears — now partly himself and partly a cybug.

This demonstrates that a person eaten by a cybug is NOT killed in the process. On the contrary, it’s the cybug that ‘dies’, because the person that was just incorporated is now the one controlling the body. King Candy not only survived his assimilation, but he appeared to be enjoying his new abilities.

Which brings us back to Calhoun’s wedding day. Recall the order of events: A cybug crashes the ceremony, swallows her fiancé, and Calhoun pummels the cybug with bulletspray. The process is so rapid that we don’t even get to see the cybug change after the consumption. But what would the cybug have changed into if it had done so? Calhoun’s fiancé. And since Hero’s Duty doesn’t reset, he presumably would’ve been fine, provided they could block him from the beacon. 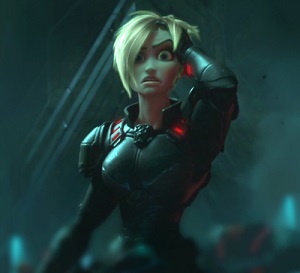