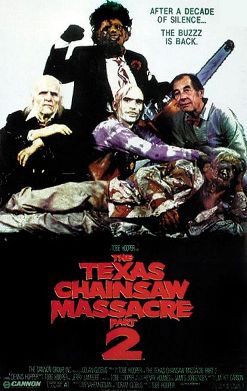 Plot: A Texas radio host is victimized by the cannibal Sawyer family, while a former Texas Ranger hunts them for the murder of his brother.

Review: The buzz is back!

The tagline for the movie means we’re in for something completely different then the first TCM film. While I will admit that my favorite horror franchise is Friday the 13th, the scariest movie I’ve ever seen is the original Texas Chainsaw Massacre. Unfortunately, the sequel ditches the entire point of the first film, going in a completely different direction.

Tobe Hooper, writer and director of both The Texas Chainsaw Massacre and The Texas Chainsaw Massacre 2, talked about the first film having some black comedy that went over people’s heads, so they wanted to make sure they upped the comedy for the sequel. I’m not sure what the fuck Tobe is talking about, as there’s absolutely no black comedy in the first film. I think this was just an excuse to go all nuts with the sequel, as they knew they couldn’t produce something as great as the first one so they went the opposite route with the story.

The premise is easy this time around: a radio DJ named Stretch is apparently Leatherface’s favorite DJ. Leatherface still has the cook with him from the first film, but is now joined by Chop Top, the Hitchhiker’s twin brother who was in Vietnam at the time of the first film. Old Leatherface and Chop Top love Stretch and her show, and after carving up a few kids who happened to be calling into Stretch, decide to take a trip to meet the DJ. Meanwhile, a retired Texas Ranger, Lefty Enright, is hunting the three of them for the murder of his nephew Franklin from the first film. Lefty uses Stretch to get at the boys, and all hell ends up breaking loose.

I give Tobe Hooper and company credit for trying to tie the first film into the second, with the character Lefty being Franklin’s uncle. The character being a Texas Ranger also gives us someone to root for against Leatherface and company. It makes sense that someone from Franklin’s family would be looking for Leatherface, and it’s also awesome that Dennis Hopper is the one playing the character. It’s a rare good guy role for the late great Dennis Hopper, and he plays it well.

Beyond the writing with connects the first two films, one character I just couldn’t stand was Chop Top. He’s become a cult hero to those on horror movie boards, but honestly I find him annoying and he takes too much screen time away from Leatherface. The original had the Hitchhiker and Cook in place to help enhance the threat of Leatherface, here Chop Top takes over the screen, and Leatherface takes a back seat to the proceedings.

The whole Leatherface wanting to get laid is pretty bad as well, but it’s so damn hammy it’s hard to take seriously. On top of that, the family is making money off a special brand of chilli…yes, chilli. This is where the whole “black comedy” comes into play, but again it comes off as cheesy and not funny. I enjoy some black comedies, and this just isn’t one of time.

The ending of the film, which I won’t spoil even though it’s been twenty plus years, leaves a lot to be desired. The viewer gets, in my opinion, no satisfying conclusion to the story or characters. Plus, if we follow the end of the film, there would be no third film, which of course they indeed made. The first film ended on a scary note and the conclusion satisfying, while this film on the other hand just ends. It’s almost like they didn’t know how they were ending the film and just ended it abruptly.

Even with the cheesy story, and a big time difference between the first and second films, Tobe brings it here as the director. There’s very little downtime in the film, and the set pieces are big and bright, giving the film a different feel from the first one.  No one can say Tobe tried to recycle the first film, much like other horror franchises have done over the years. I give Hooper credit for trying something new, even if it wasn’t that great in the end.

Acting: Absolutely love Dennis Hopper as Lefty Enright, the mad as hell Texas Ranger that ends up strapping on two small chainsaws to each side and grabbing a big one to take on Leatherface head on. Hopper is bat-shit crazy here and it’s awesome.

Even though I hate the character, Bill Moseley does a great job being the lunatic Chop Top.

Bill Johnson does his best Gunner impression for Leatherface, but he never gets a chance to shine in the film.

Caroline Williams, as Stretch, may have the most annoying scream in the history of horror movies. Ugh. She is pretty cute though, so I guess it evens out.

Gore Factor: Tom Savini worked the special effects, and there’s plenty of gore here for everyone! We get a head sawed in half, a face cut off, a hammered in head, and plenty of body parts lying around. Ewwww!

Nudity Factor: Caroline Williams shows off some leg in her daisy dukes.

Overall: I remember hearing a story ten years ago that one idea for the film would have had Sally’s friends (the girl who survived the first film) going out to the farmhouse looking for revenge. In a way, we got it here, but I think that idea would have been far better then what we got. There should have been no comedy, and thankfully the next film in the series would avoid being funny at all. Beyond Hopper giving a cool performance, and Tom Savini’s gory work, you aren’t missing anything. Skip this one.