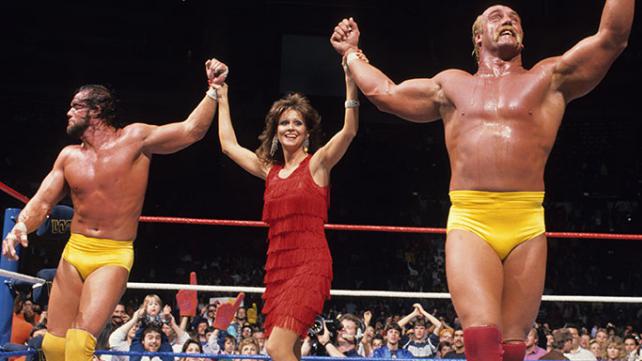 We start off this week’s edition of “The Cowboy Goes to Class” with a five-on-five elimination match from Survivor Series 1988. The match pitted The Mega Powers (Hulk Hogan and Randy Savage) along with Hercules, Koko B. Ware, and Hillbilly Jim against The Twin Towers (Akeem and The Big Boss Man), Ted DiBiase, Haku, and the Red Rooster. There were a whopping four managers/valets at ringside in Bobby Heenan, Slick, Virgil, and the incomparable Miss Elizabeth.

In the spirit of full disclosure, I pretty clearly remember watching this one live as a nine year old. I wasn’t sure until I saw Jesse Ventura in a pilgrim outfit. Evidently, that image has been burned somewhere in my mind for the last 25 years because as soon as I saw him a flood of memories came back to me. As with the other matches in this Series, I have not viewed or thought of this contest since 1988.

It is pretty clear from the pre-match interviews and Gorilla and Jesse’s commentary that the real story of this match is going to be The Mega Powers and The Twin Towers. Boss Man maced Hogan at one point or another in the weeks leading up to the Survivor Series and the Hulkster is out for payback. There is also a storyline involving DiBiase and Hercules that has the Million Dollar Man referring to Herc as his “slave”. Things start off fast and furious and within a few minutes Koko, Hillbilly Jim, and The Red Rooster have all been eliminated. I couldn’t stand the Rooster back in 1988 and I feel the exact same way today. I love watching that guy get his ass kicked. Next, we had the inevitable clash between Hercules and DiBiase. Herc gets in a few good licks, but Virgil distracts him just long enough for the Million Dollar Man to wrap him up from behind and get the pinfall.

Now the fun begins as it is The Mega Powers versus The Twin Towers, DiBiase, AND Haku. The deck is stacked against our heroes but I have a feeling they’ll pull through. Savage very quickly tightens up the contest by beating DiBiase at his own game and pinning the Million Dollar Man while he is distracted. This sets off by far the best sequence of the match as we get a heavy dose of Boss Man and Akeem. Hogan is handcuffed to the ropes by Boss Man and beaten mercilessly with the rogue officer’s nightstick. While Hogan is incapacitated, Savage is pummeled by both the Boss Man and Akeem. During the melee, Boss Man is counted out (weak) and Akeem is disqualified (weaker) somehow leaving the Mega Powers facing only the newly crowned King Haku. Savage does a tremendous job selling the beating he took at the hands of The Twin Towers as he looks like he’s inches away from death. Meanwhile, outside the ring, the very underrated Slick is waving the keys to the handcuffs in the Hulkster’s face. Hogan musters up the strength to stretch out both Slick and Bobby the Brain and Elizabeth has the wherewithall to pickpocket Slick and unlock the Hulkster. Savage falls into the corner Hulk slaps his back for the tag.  Hulk comes in and drills Haku with the big boot and nails the leg drop for the hard earned victory.

During the obligatory Hogan celebratory sequence, we start to see the seeds of dissension in the ranks of the Mega Powers. Savage can barely stand and Hogan is doing his posedown thing. Hogan is really coming off as a glory hog here. He then ups the ante by picking up Miss Elizabeth and swinging her around the ring. Savage clearly is not a fan of this. You can see the perturbment on the Macho Man’s face as the three of them celebrate the victory. As the viewers we are left wondering whether this is just a slight bump in the road of a great partnership or the beginning of the inevitable breakup of these two alpha dogs. Stay tuned! 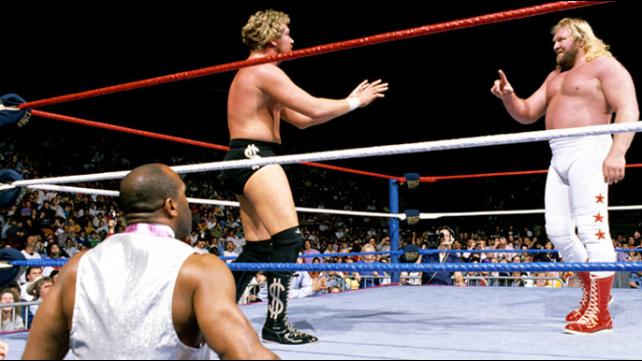 Tuning in for the Royal Rumble, I had forgotten what a bold concept this type of match was at the time. Again, I remembered watching this one live and being completely enthralled with the concept. There were huge amounts of anticipation each time the clock appeared in the lower half of the screen signifying a new wrestler was making his way to the squared circle. While the Rumble itself was a great match, it was the rare WWE event that was defined by two of the match’s losers as opposed to the winner.

The seeds of discontent that had started to have been sown for The Mega Powers during the Survivor Series grew in a big way during this Rumble. Hogan inadvertently (or was it?) dumped the Macho Man out of the ring while eliminating Bad News Brown at the same time. Savage was irate and the only thing that stopped the two superstars from coming to blows was Miss Elizabeth racing to the ring and physically getting in between them. To me, this was another case of the glory hog, Hogan, taking an opportunity to put himself above the Macho Man in The Mega Powers pecking order. While the reluctant teammates ended things with a handshake, this incident did not bode well for the future of the duo. The Hogan/Savage stuff got, by far, the biggest reaction from the crowd. When Hogan was eliminated a few minutes later by The Twin Towers, the rest of the match seemed anticlimactic. I liked Big John Studd as much as the next guy but c’mon…if you’re the WWF you have to have Hogan, Savage, or possibly Andre win that match. Studd took the Rumble by eliminating the Million Dollar Man cleanly. Other than a half hearted attempt at a bribe by DiBiase, there was little to no drama in the final pairing.

As I said earlier, this match was all about the Mega Powers. We’ll be finishing this part of the series next week, but I have some thoughts as to what I think is going to happen (I don’t remember it, I swear). In my view, one more glory hogging moment from Hogan will be the straw that breaks the camel’s back. At this point, Savage is the champion and he is getting sick of cowtowing to the aging Hulkster. The Macho Man’s time is now and Hogan can’t seem to share the spotlight. I don’t think this is going to end well.