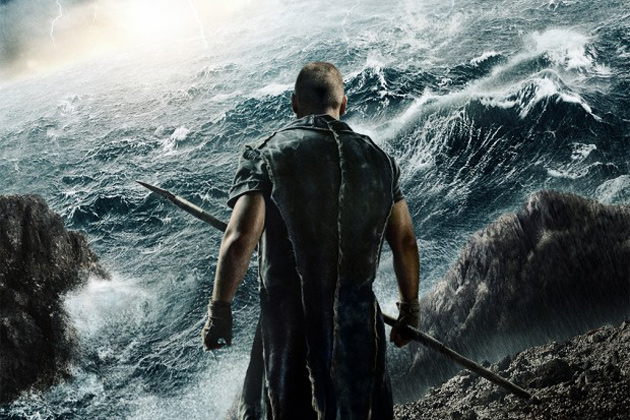 Is this the end or the beginning?

The story of Noah’s Ark is one of most recognizable tales from the Bible. Darren Aronofsky’s re-telling of the tale takes some liberties that make you think and add some intrigue to one of the world’s oldest stories. The ensemble cast of Russell Crowe (Noah), Jennifer Connelly (Naameh), Emma Watson (Ila), Anthony Hopkins (Methuselah), and Ray Winstone (Tubal-cain) come together for some commanding scenes that really drive the story home and it is Clint Mansell’s score that ties everything together. Aronofsky’s tale is a tale of science fiction and at over two hours, the film takes you on an epic journey from the beginning to end, or end to beginning, depending on how you view the tale.

The film begins with Noah’s father Lamech (Marton Csokas) discussing life and as he is about to pass on the serpent’s skin, Tubal-Cain makes his first of many memorable appearances to strike down Lamech and start Noah’s path towards his fate. One of the things that Aronofsky does well throughout the film is move the story forward. There are multiple sequences of time passing that don’t take away from the film but give it a chance to breathe. The story of Noah accounts for over hundreds of year from beginning to end and Aronofsky doesn’t let the story slow down but continue to progress.

The next scene of Noah is that of a middle-aged man with a wife (Naameh), and three sons Shem, Ham, and Japheth. It is this point where the world that Noah lives in is revealed. It is a dry, dead land with no substance. Noah then receives his first signs from the creator, which shows the end of life, but the vision isn’t clear. Aronofsky uses some powerful imagery at this point and it sets up some themes for the rest of the tale. These images lead Noah to find his grandfather Methuselah (Anthony Hopkins). The dangerous journey gives viewers the first real glimpse at the “villains” of the film. These are simply men who are looking to survive and will do anything they can. This is also the point in which the Watchers make their first appearance. This is the biggest questionable decision made in the telling of Noah’s tale by Aronofsky.

The Watchers are the only piece of this film that leaves me wondering whether or not it was needed. They are essential giant rock formations that were cast out of Heaven. Their piece in the tale is very important which helps with their presence in the film and alleviates some of my dismay but then you take into account that this is a tale from the Bible and Noah live to be over 900 years old along with him seeing miracles and talking to God… and well it is okay in my book.

After Noah meets the Watchers, he finds his way to Methuselah, played by Anthony Hopkins, who controls the screen. His presence is very mystical and you know that he’s important from the first moment you see him. Noah and Methuselah discuss the vision that Noah had and then Methuselah gives Noah tea, which allows him to see his next vision. This is a vision of the same things as before but then the ark is revealed and Noah’s destiny is set forth. This is the precursor for the film and what becomes one of the most epic rides I have been on in the theater in quite some time.

The film goes through the story of the building of the ark, the flood, and the events that follow. As stated earlier, Aronofsky uses his time in the right ways and highlights the key moments of this saga and drives the story home. With his direction, the cast delivers some amazing performances. Russell Crowe’s portrayal of Noah is masterful and he does an incredible job depicting this man who has this amazing task. The story illustrates the decisions that Noah has to make for himself, his family, and humanity. Crowe is fantastic with this inner choice that must be made for the fate of all mankind. Right by Noah’s side is Naameh (Connelly). She is faithful to Noah and everything he says he has to do. She is a key to his formation of the ark and helps him with the decisions he is forced to make.

Ila (Emma Watson) is a surrogate child that Noah and Naameh find and raise. She grows up with their boys and finds love with Shem (Douglas Booth). Watson does a very good job in this role and has a certain level of vulnerability that translates so well to the morale of the story. This is a story of tragedy and heartbreak. The creator has ended all of humanity; Ila wears that on her sleeve and portrays it in all of her scenes. The one who makes the biggest impact on the screen is Tubal-cain played by Ray Winstone. From the opening moments of the film, Tubal-cain makes his presence known and every moment he is on the screen he commands the attention of the viewer. He is the main villain and plays the role perfectly. He is all that is “wrong” with humanity and will do anything to go against Noah and his “visions” of what the world will become. It is these characters that are the internal driving force that is Noah as a film, but the external force of Clint Mansell’s score that brings it to life.

Often times the score of a film can be just as important as the acting. Look at Star Wars, Rocky, Psycho, the Godfather, and Jaws. These films were great, but it was the score that put them onto another level. Noah may not go down as one of the all time great movies, but it has all the makings of being one of the top movies of 2014. Clint Mansell sends some strong vibes that form specific scenes in the film and like 12 Years a Slave last year, will set the film apart from its peers.

I was very happy walking away from Noah. The score was impressive, story is epic, and the acting was great. This was the best movie I have seen thus far in 2014 and I plan on taking some more trips to the theater to see some of the big movies coming out this year. Captain America 2? Draft Day? Sabotage? Bad Words? Which review would you like to see next? Thanks for tuning in here on the placetobenation.com. Please stay tuned for more reviews in the future. Here is to 2014 and the movies!