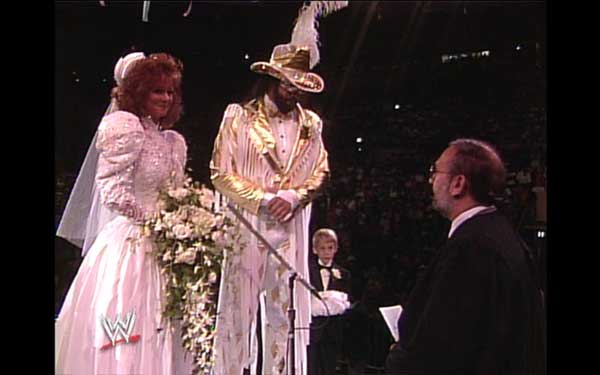 Howdy wrestling diehards! Cowboy here with this week’s edition of Cowboy Goes to Class.  Last week we had the pleasure of taking a look back at In Your House: Canadian Stampede. This was one of the better shows I’ve seen. With SummerSlam fast approaching, the Professor thought it would make sense if we reviewed a few of the previous Slams in the weeks leading up to this year’s version. First up is SummerSlam 1991. In the spirit of full disclosure, I do remember watching this one as a youngster. Let’s break it down!

Match of the Night: Bret Hart vs. Mr. Perfect for the WWF Intercontinental Title

Watching the show, this tussle for the Intercontinental Title sure felt like match of the night. It was the longest match on the card, featured two WWF greats in their primes, and had a major championship on the line. I had very lofty expectations for this match coming in, and felt as though the match delivered. There was a great ebb and flow and the outcome was very much in doubt. When Perfect hit his signature finisher, the PerfectPlex, I thought this one was over. Somehow Bret was able to kick out (the first man to do so according to the announce team). A few minutes later Bret was able to lock in the Sharpshooter for the submission victory. One small complaint I have is that the referee (Earl Hebner) seemed to call for the bell before he even had the hold really locked in. I would’ve liked to see Perfect struggle for a bit to get free before being submitted. With that said, Perfect was awesome throughout the match and did a great job of selling all of Bret’s moves. The post match fight where Perfect gets his leotard overalls (unitard?) ripped off and is down to his undies even added some comic relief. Awesome match.

Performance of the Night: Virgil

I’m sure some purists will disagree with me here but I absolutely loved the Virgil vs. Million Dollar Man angle and match. DiBiase is at his pompous best and Sherri is always a wild card. However, Virgil stole the show. Emboldened by the crowd and the very biased announcing of Roddy Piper, Virgil plays the part of the former disgruntled employee to perfection. You get the impression during the match that DiBiase is clearly the better wrestler. Virgil’s main form of attack is a one-two boxing combination and he isn’t bringing too much more to the table. Everybody loves an underdog though…every time DiBiase drops Virgil he gets back up. The crowd is really into this one. What I love about the angle is how much most people can relate to it… there are lots of folks who would love the chance to step into the ring with their boss. When Virgil got the pin, after a hell of a match, I found myself standing up and cheering like I was in the arena. The little guy won. Virgil was everybody’s hero for one evening. That earns him Performance of the Night.

Looking at the card before the show, this seemed like a great candidate for a fast forward. I was never a huge fan of the Boss Man as a good guy and remember the Mountie just being an annoying bum. I was pleasantly surprised with both this match and the angle. This was a “jailhouse match” with the loser having to spend a night in the clink. The Mountie really sold his part as the holier-than-thou Canadian as he spent much of his promo insulting the boys in blue from New York. The match itself was decent, but the aftermath was fantastic. The Mountie dragged kicking and screaming to the paddy wagon, and eventually a jail cell in the Big Apple. The last we see of the Mountie is what can be described as a “pre-prison rape” scene that would absolutely, 100% not fly today. Overall, while a bit offensive at the end, the angle and the match were surprisingly entertaining.

What was a very good show was a bit marred to me by a very subpar main event. The match pitted Hulk Hogan and Ultimate Warrior vs. Sgt. Slaughter, Col. Mustafa, and Gen. Adnan with Sid Justice as the special guest referee. The match was pretty short for a main event and everything seemed a bit forced. I wasn’t buying Hogan and Warrior as a team and I certainly wasn’t buying Hogan and Justice becoming buds and posing in the ring together after the match. Slaughter was pretty old at this point and didn’t bring much to the table. The fact that the Iron Sheik would be billed as anyone but the Iron Sheik is just awful. General Adnan is probably the most forgettable wrestler in WWF main event history. I get that they were trying to capitalize on the war with Iraq (not sure I agree with that strategy either), but it was done in a very ham-handed way. They put three guys together, threw Iraqi uniforms on them, and had them fight Hogan and Warrior. This match was not worthy of a major PPV main event slot and dragged down the whole card in my opinion.