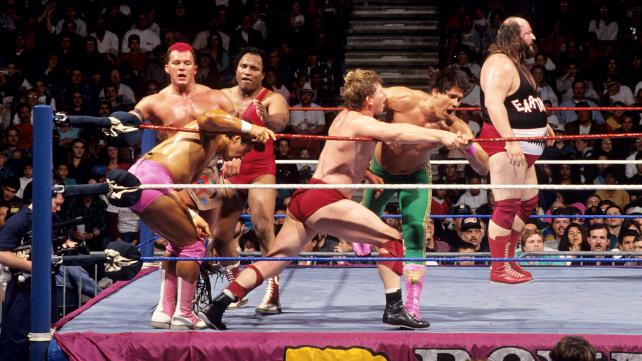 For this week’s assignment, we are straying from the standard path a bit. Instead of looking at a few individual matches, I was tasked with watching the 1993 Royal Rumble show from start to finish. This coincides with the Monday Night Raw live watches that myself, the professor, Scott Criscuolo, Steve Wille and Chad Campbell are doing on the Place To Be Podcast. In the last episode, we watched Monday Night Raw #’s 1 & 2 and tonight we will be picking up where we left off.  In between those episodes was the 1993 Royal Rumble. So to prep, I decided to break it down award show style. Enjoy!

Match of the Night:  Shawn Michaels defeats Marty Jannetty for the Intercontinental Championship

This was a very tough call for me. I really liked the Bret Hart vs. Razor Ramon title match but felt that this Intercontinental Title clash was just a smidge better. I’ve always been a sucker for Shawn Michaels matches and that has grown even more since I’ve started writing this weekly column. It’s great to see young HBK fresh off his split up from the Rockers. You can really see the potential just oozing out of him as he is starting his singles career. Jannetty, for his part, is what put this match over the top for me. I thought he was fantastic. There were a number of near falls and it looked on multiple occasions that Marty would get his revenge and pilfer the belt from Shawn. I’m not usually a huge fan of the “girl” angles, but Sherri doesn’t bother me too much here. She was crazy enough to keep me guessing throughout whether she was truly over Shawn and helping Marty or just playing Marty. My only beef with this match is the finish. I feel that such a quality match fought at such a high level deserved a clean finish. Marty getting accidentally clocked by Sherri just didn’t do it for me. Other than that, it was a great, entertaining match and my favorite on the card (by a whisker).

Performance of the Night: Bob Backlund in the Royal Rumble

Easy call here. Backlund turned back the clock with a very surprising run in the Rumble. He was one of the first two combatants along with Ric Flair, and for the first 25 minutes or so was an afterthought. As chaos ensued around him with many wrestlers entering and being eliminated, Backlund survived. I’m not sure what the motivation for having Backlund last an astounding 61:10 in the Rumble was, but I loved it. When you looked up at the final three participants and saw Backlund, Macho Man, and Yokozuna, it was very difficult not to root for old man Bob. He nearly capped off his miracle run with an even more miraculous elimination of Yokozuna. Backlund showed off his impressive stamina by staggering the giant with multiple dropkicks. As Yoko lay prone on the ropes Bob went flying in for the kill shot only to be sidestepped by Yoko and tossed out. Nevertheless, it was a fantastic run for a great former champion and easily earned my Performance of the Night.

Biggest Positive Surprise: Earthquake and Typhoon in the Rumble

I was never much of a fan of these two behemoths, but felt they both really delivered during what I considered to be a subpar Rumble. Typhoon was the first of the Natural Disasters to enter and didn’t make too much noise or do anything of note. Things, however, got very interesting when his tag team partner Earthquake entered the fray. Putting allegiances aside, the two monsters immediately waged war on each other in the center of the ring. I love when tag teams beat up on each other in search of individual glory and this was no exception. Earthquake got the better of things and eventually eliminated Typhoon. Earthquake also scores major points for doing some serious damage to the man of the hour, Yokozuna. Not intimidated by Yoko’s size, Earthquake went right at him and had him reeling in the corner after an Avalanche splash. This was by far the most trouble Yoko was in for the entire event and I thought Quake was going to take him out. Alas, it wasn’t meant to be as Yoko was able to toss the gigantic Natural Disaster over the top rope (barely).

This was another easy call for me. I loved seeing young Undertaker enter the Rumble fifteenth and immediately start cleaning house. He was such a force of nature at this point in his career and I thought he was well on his way to winning the event. There certainly was nobody in the ring who could derail the Deadman’s train. Enter Harvey Wippelman, possibly my single least favorite individual in wrestling, and a massively tall giant wearing the most ridiculous suit I’ve ever seen. To call this suit stupid looking would be an insult to stupid looking suits everywhere. The suit was 75% fake muscles and 25% gorilla hair…just awful. This giant comes to the ring and just decimates the Undertaker with a bunch of weak moves and eliminates him from the Rumble. Not much more needs to be said about this. I’m just going to pretend it never happened.

Overall, I thought he show was good but not great. The Rumble itself was one of the weaker that I have seen but the other matches were very good. One thing the show did was leave me very excited for tonight’s Monday Night Raw and the Perfect vs. Flair match. Until next time…Cowboy out!

Teacher’s Note: Really good breakdown here Cowboy. The 1993 Royal Rumble is an interesting show and the subsequent fallout gets intriguing. Everyone be sure to check back here tonight for our review of the two episodes of Monday Night Raw that followed this show!