Howdy there grappling junkies! Cowboy here with this week’s edition of Cowboy Goes to Class. After last week’s foray into the mediocrity that was Survivor Series 1990, I was excited when the Professor assigned another 90’s treasure. In Your House 5 featured some intriguing matches on paper and one of my favorite wrestlers who I haven’t gotten to cover too much in the column. Also, the main event looked like a can’t miss showstopper on paper. I went into this one feeling hopeful. Let’s see how it played out.

Match of the Night: Bret Hart vs. British Bulldog for the WWF World Title

Easy, easy call here for MOTN. While the card was pretty solid from top to bottom, this match clearly took the cake. In fact, I would rate this match third best of all the matches I’ve covered in this column, only behind HBK/Taker from WrestleMania 25 and 26. These guys have great chemistry in the ring and the family feud aspect of the bout cannot be ignored. There was a real sense of tension for the full duration of the bout. Things start off innocently enough with the Hitman and Bulldog going back and forth with some top notch technical wrestling. There are multiple near falls and neither guy was able to sustain an advantage. Eventually, the Hitman is cut outside the ring and that’s when a good match becomes great. From the time he sustains the cut, the broadcast goes split screen focusing on Bulldog’s wife, and Bret’s sister, Diana. Bret is bleeding like a stuck pig and Bulldog hits him with everything but the kitchen sink, including a brutal Powerslam on the outside apron, but is unable to put him away. Bret eventually wins it with an Oklahoma Roll (credit the internet for the name of the move… I’m not that savvy).  Awesome match and both guys look the worse for wear afterwards. Incredibly gutty performance by Hart. The level of blood, brutality, and technical wrestling were all grade A. I’ll be watching this one again real soon.

Performance of the Night: Diesel

Pretty clearly Bret should win POTN, but in the spirit of discussing the other matches on the card I’m giving it to Big Daddy Cool. I’m a huge fan of the big guy and he was an absolute destroyer on this card. Not many wrestlers before or since could match Nash’s combination of size and swagger. At his peak, he gave me that same feeling that Warrior, Hogan, and the other greats did of being completely unstoppable. The cannon fodder for Big Sexy on this card was the dangerous and highly talented Owen Hart. I loved the backstory that Owen had put Shawn Michaels out of commission and Nash was here to get revenge. In what was a surprisingly back and forth match, Nash eventually took command and refused to pin Hart in order to inflict more punishment (I love this tactic). Nash, in true Nash fashion, slugs the ref and gets disqualified before making the “give me the belt” gesture. Big Daddy Cool was at his surly best in this one and I couldn’t have been happier with it.

While the opening match of the card featured some big names, my expectations weren’t high. I’ve never been a huge fan of Psycho Sid and 1,2,3 Kid was still a little wet behind the ears for the big time. Also, I was just having trouble picturing the Bad Guy teaming up with former tag team specialist Jannetty. I was pleasantly surprised with this one. The match had good, sustained action and Razor and Marty worked well as a team. Jannetty took a massive beating for most of the match before giving way to Razor who absolutely cleaned house. Fun match and I’m looking forward to seeing these two work together again.

Biggest Negative Surprise: Undertaker vs. Mabel in a Casket Match

Wow was this terrible. I’m a huge fan of Taker’s but this was a joke. What was the point of even having him on the card. I’m not a huge fan of gimmick matches in general, but usually the Casket Match is an exception because it is so specific to Taker. Unfortunately,  this one was a train wreck. The only saving grace was that the match was very brief. Evidently Mabel had control of Taker’s urn that now was a gold chain… are you kidding me? Whoever dreamed up this feud should have been immediately fired. Hopefully in my next WWF assignment Taker is back headlining with the big boys and Mabel is in the buffet line where he is most comfortable. With that said, I did have a soft spot for Viscera and miss the big guy. This was not his finest hour, though. 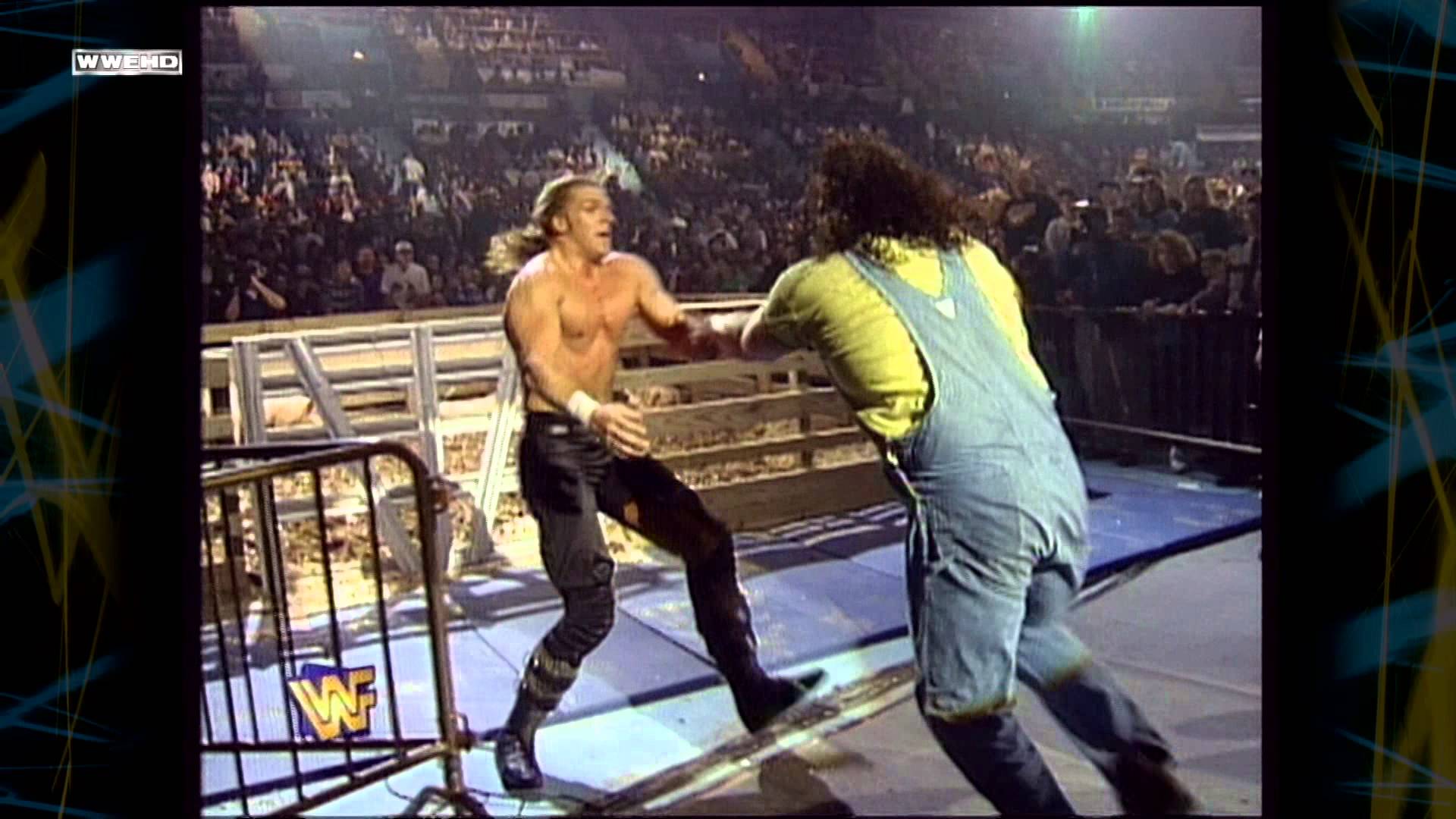 HHH vs. Henry Godwin in a Hog Pen Match: While I was originally mortified when seeing this on the card, the match was a lot of fun. Definitely not in the pantheon of Hunter’s career but a very good affair for what it was. Hillbilly Jim as the guest referee calling the match right down the middle was the highlight.

The Nature Boy – Buddy Landel: Obviously they were taking a shot a Ric Flair but this was just awful. The character sucked and the match sucked worse. Hopefully they put this gimmick back in the bag after this appearance.

All in all this was a very enjoyable, solid card with a great Main Event. Let’s keep churning these out Professor. Until next time… Cowboy out!!