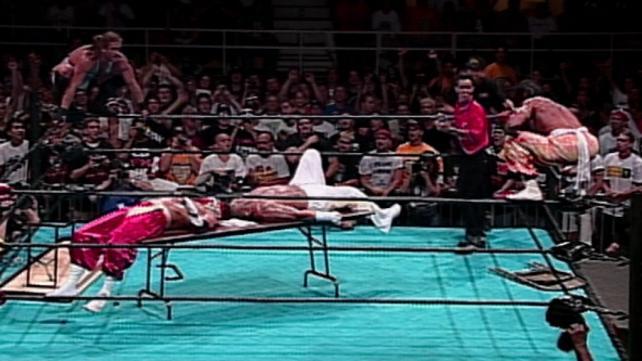 Howdy wrestling fans! Cowboy here to provide your weekly installment of Cowboy Goes to Class.  This week’s assignment is not for the faint of heart. The Professor has sent me back to 1998 to view ECW Heatwave. Embarrassingly, this is the first ECW card I’ve ever watched. I’m familiar with the product, I just always gravitated toward the WWF. This was a crazy show! Let’s break it down.

Match of the Night: Rob Van Dam and Sabu defeat Jinsei Shinzaki and Hayabusa for the ECW Tag Team Title

On a card filled with crazy matches, this one took the cake for me. Coming into the bout I was very familiar with RVD’s work and had seen a couple of Sabu’s matches. Needless to say, I expected high flying action.  The Japanese imports pleasantly surprised me. Hayabusa did some crazy stuff off the top rope and Shinzaki was tough as nails. I loved RVD’s me-first attitude and the added tension it caused between he and Sabu really kept me guessing. This was a long match (over 20 minutes) with multiple jaw-dropping moves by each team. My personal favorite was the RVD leg drop off the top rope while Shinzaki was in a Sharp Shooter looking hold from Sabu. RVD and Sabu ended things by putting both members of the other team through the table (see above).  Awesome finish to an awesome match.

Performance of the Night: Masato Tanaka

I had never seen Tanaka fight before viewing this card. His match with Mike Awesome would have been good enough to take Match of the Night on many of the shows I’ve covered. This match was a slobberknocker and I only give Performance of the Night to Tanaka because he emerged victorious as Awesome was equally as impressive. Inside and outside the ring they laid waste to each other. Tanaka, the much smaller man, reversed an “Awesome Bomb” attempt and put Mike directly through a table by basically deadlifting him and throwing him over the top rope. What a great move! Tanaka also showed ridiculous amounts of heart as Awesome hit him with everything but the kitchen sink (including multiple hard chair shots). Tanaka finally finishes off Awesome with a tornado DDT. For that, he wins Performance of the Night!

Usually I give this award to one of the combatants, but for this card I’m using the promos as a whole. I was keenly aware of ECW’s reputation for crazy bouts and even crazier fans. I was very impressed with the wrestlers promo ability. I found myself extremely fired up for any bout that included an extended promo. My personal favorite was Bubba Ray Dudley’s rant in the locker room setting up the main event. Big Bubba Ray continued his awesomeness in the ring before the bout… TESTIFY! I also really liked Taz’s promo before his match with Bam Bam. Finally, as stated previously, I thought that RVD did great work as the self absorbed prima donna.

Looking at the card prior to the bout, I felt this would be the best match. I was very familiar with both guys and was a fan of their work… particularly Bam Bam. I was sorely disappointed by this bout. I felt it was pretty clearly the least entertaining bout on the card. I understand that ECW is all about being extreme, but I felt this was a real waste of Bam Bam and Taz’s wrestling skills.  The match basically devolved into a street fight about 30 seconds in. They fought in the crowd and on the ramp. Unfortunately, it was just a slugfest with each guy landing big punches on each other. Eventually they both go through the floor of the ramp in a pretty cool scene. Bam Bam emerges first from the hole and Taz gets him from behind and submits him with the Tazmission. Given that neither guy really did a wrestling move during the whole match, I felt the submission finish was a little weak. Overall, it wasn’t the worst match I’ve ever seen but on a very good card it stuck out as poor. 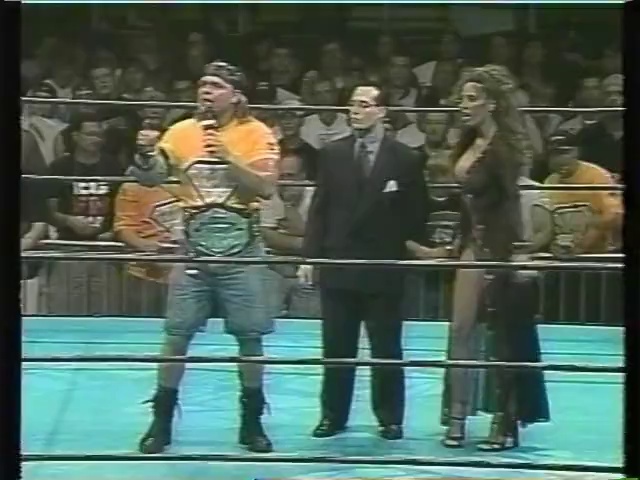 Overall, this was a great show and I will definitely be checking out more ECW shows in the near future.  Thanks everyone for reading. Until next week… Cowboy out!!!